Joe Burrow led an efficient offense that scored on six drives, including two of his touchdown passes, and rookie Evan McPherson made four field goals as the Cincinnati Bengals finally advanced in the playoffs with a 26-19 win over Las Vegas in Saturday’s wild-card game.

It was a victory three decades in the making for the Bengals (11-7), who hadn't won in the postseason since 1991. After going from worst to first in the AFC North with a generally young roster, they ended an embarrassing long postseason drought that spanned 31 years and eight consecutive defeats.

The Bengals had to survive a Raiders drive to the 9-yard line, but Derek Carr was intercepted on fourth down by Germaine Pratt. 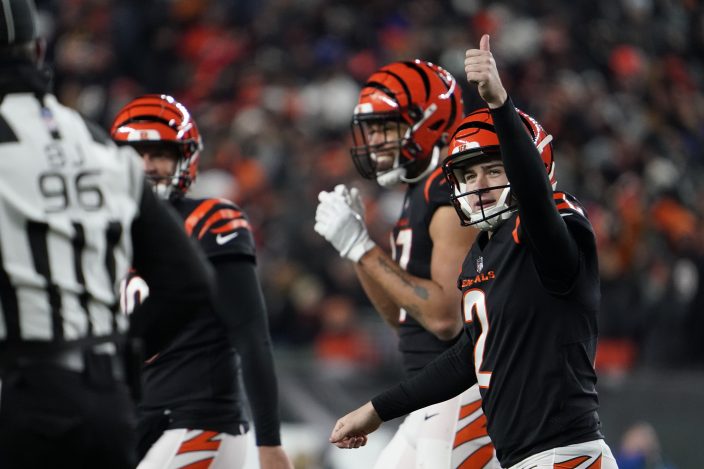 Helped by some problematic officiating by Jerome Boger’s crew that might have allowed Burrow’s touchdown pass to Tyler Boyd to count when it shouldn’t have, the Bengals also extended a lengthy postseason drought for the Raiders (10-8).

Las Vegas, which won its final four games to squeeze into the playoffs, last won in the postseason in the 2002 AFC championship game.

Cincinnati made it 4 for 4 on scoring drives late in the first half, though with some controversy. Burrow rolled right to avoid pressure and threw from close to the sideline. Play continued despite an erroneous whistle by an official, who thought Burrow stepped out of bounds. Boyd caught the 10-yard pass in the back of the end zone for a 20-6 lead. The play counted, to protests from the Raiders, who cited the rule that the ball should be returned to the previous spot. 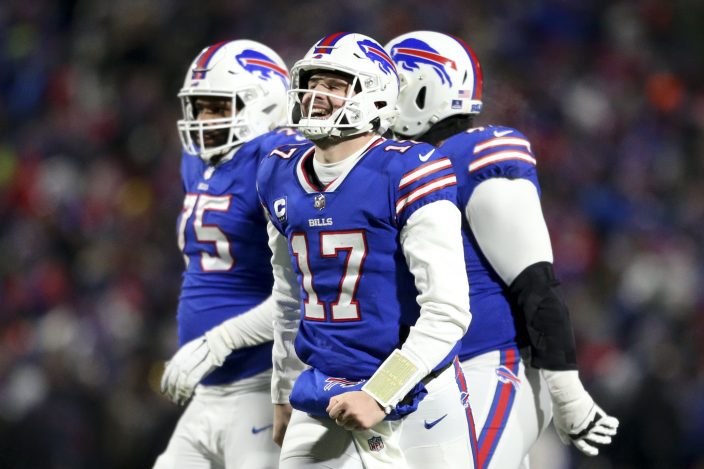 Josh Allen set a Buffalo Bills playoff record with five touchdown passes, including two to Dawson Knox, and Devin Singletary ran for two scores in the first half of a throttling of division rival New England.

Allen finished 21 of 25 for 308 yards in a game Buffalo scored on each of its seven possessions that didn’t end with a kneeldown.

The Bills beat New England for a second time in three weeks and rebounded from an embarrassing 14-10 loss at home on Dec. 6 in which the Patriots attempted just three passes while finishing with 222 yards rushing to counter the blustery conditions.

The margin of defeat was the largest in the playoffs for New England in coach Bill Belichick’s tenure, which began in 2000.

Though the winds were relatively calm Saturday, the Bills were hot in frigid conditions, with a game-time temperature of 7 degrees.

Buffalo gained 300 yards of total offense, had 19 first downs and built a 27-3 lead at halftime. The 30-point margin of victory and 47 points scored were the second most by the Bills in a playoff game behind a 51-3 win over the Los Angeles Raiders in the AFC championship game on Jan. 20, 1991.

Jones struggled in finishing 24 of 38 for 232 yards with two touchdowns to Kendrick Bourne, including a 4-yarder in the final two minutes. Jones was also intercepted twice.