Officially, NBA players began participating in games that were scheduled to celebrate and honor the life of Dr. Martin Luther King Jr. in 1986 when the federal holiday commemorating the civil-rights leader was observed for the first time.

Oscar Robertson knows the tradition dates back long before that.

King was shot and killed while standing on a balcony of the Lorraine Motel in Memphis, Tennessee on April 4, 1968. A day later, Robertson began planning a benefit game in King’s memory — and on Aug. 15 of that year, on an outdoor court in New York, he was among 27 NBA players who wound up taking part. 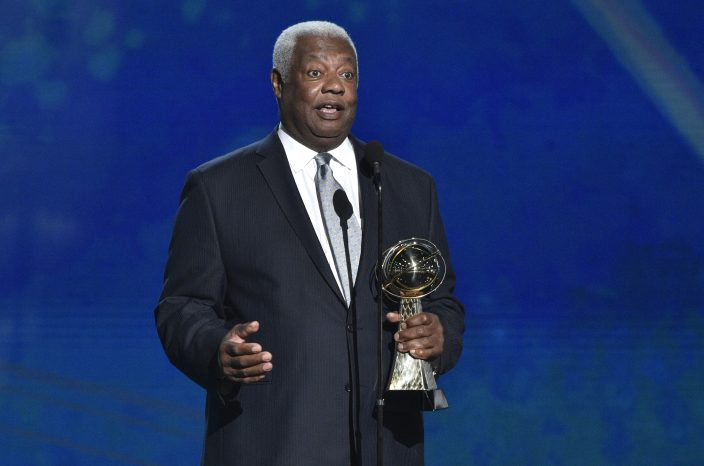 Oscar Robertson accepts the lifetime achievement award at the NBA Awards on Monday, June 25, 2018, at the Barker Hangar in Santa Monica, Calif. NBA players officially began participating in games that were scheduled to celebrate and honor the life of Dr. Martin Luther King Jr. in 1986 when the federal holiday commemorating the civil-rights leader was observed for the first time. Oscar Robertson knows the tradition dates back long before that. He organized a tribute game that was played a few months after King was shot and killed in 1968. And the NBA great is pleased to see players are still remembering, and learning, about those who came before them. (Photo by Chris PizzelloInvisionAP)

Among those on the court that night: Wilt Chamberlain, Lenny Wilkens, Dave Bing, Dave DeBusschere, Willis Reed, Walt Bellamy and many others.

“What happened years ago with Dr. King is still part of our social fiber,” the 83-year-old Robertson said.

The annual reminder of that comes Monday, on the annual celebration of the King holiday. The NBA has scheduled 12 games — including the traditional home games in King’s birthplace of Atlanta and in Memphis, where he was killed at 39.

Memphis plays host to Chicago in a matchup of two of the league’s biggest surprises so far this season, while Atlanta will host reigning NBA champion Milwaukee. And Robertson believes it’s critical players in this generation are reminded of what those who preceded them in the game had to endure as the NBA celebrates its 75th anniversary.

“When I was younger there were so many things couldn’t do,” Robertson said. “I couldn’t go here or there, had to ride in the back of the bus when I went back to see my grandparents in Tennessee, and all these types of things. But these things, you become aware of them. The players today didn’t have to go through any of that. They’ve only read about it.”

NBA teams have been paying tribute to King in many ways in recent days. Teams have been warming up in shirts bearing the message “Now is the time to make justice a reality for all," a nod to a line he used in his famous “I Have A Dream" speech in 1963.

Some teams are also taking part in other ways; 10 clubs are planning youth events in their cities as part of the “Team Up For Change" initiative that focuses on “uniting, inspiring and activating around a shared commitment and call for racial equality and social justice." The Washington Wizards held a roundtable discussion late last week on how King still impacts the push for social change — and Wizards forward Daniel Gafford said it's important for even pro athletes to find time to help their communities.

Robertson still has vivid memories of a college tournament he played in, the 1958 Dixie Classic in North Carolina, an event that featured his Cincinnati team and Michigan State, among others.

And he recalls how he and Michigan State’s Johnny Green stood out in that event.

“We might have been the only two Black guys in the arena,” Robertson said. “That was the way things progressed. I’m so glad it’s gotten better.”

Robertson was the first president of the National Basketball Players Association, and he urged players to participate in that August 1968 exhibition that doubled as a two-hour telethon — it was broadcast on television in New York and raised around $90,000, some of that going to the Southern Christian Leadership Conference that King championed.

He said he’s proud to see how players have continued using their platforms, such has speaking out against injustices and the decision by the Milwaukee Bucks to not take the floor for a playoff game at the NBA’s restart bubble in 2020 in response to a Black man from Wisconsin being shot by police.

“I think players today are more informed about what’s going on, and also they have a great advantage of getting their voices out to people because of the social media and whatnot,” Robertson said. “I’m so glad that the NBA and the players association have gotten together to try to confront all these issues.”