Wiping out Manchester City's 11-point lead at the top of the Premier League looks an onerous task. Liverpool manager Jürgen Klopp is at least gaining hope from a season with so many sudden variables.

Squads are being stretched by coronavirus cases, African Cup of Nations absentees, injuries and postponements that can overload schedules.

Liverpool did manage to end a three-match winless run in the league by beating Brentford 3-0 on Sunday, even with its attacking options depleted by Mohamed Salah and Sadio Mane being on international duty in Cameroon. 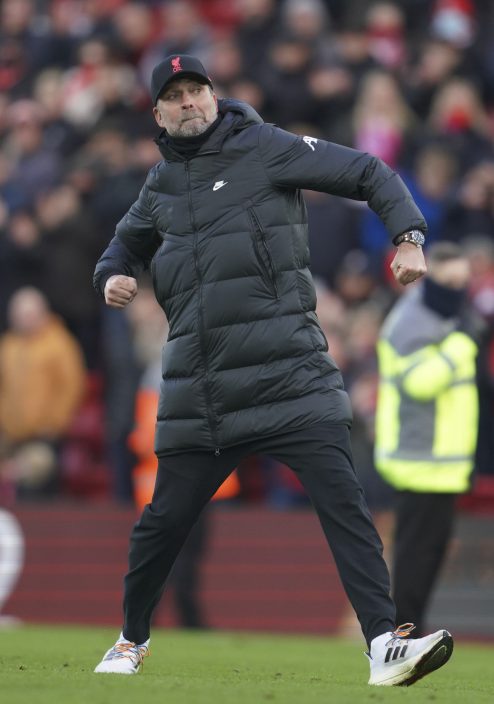 Midfielder Fabinho headed in a corner just before halftime, Alex Oxlade-Chamberlain scored his first league goal at Anfield since July 2020 and Takumi Minamino completed the win after coming off the bench.

Having surrendered the trophy to City last season, Liverpool does at least have a game in hand on the leaders which could cut the deficit to eight points for Klopp's side.

“We don’t have to convince anyone outside to believe," Klopp said. “If you are with us, you will enjoy the ride and we will go for everything. We are ready to go as much as we can.

“In a normal world nothing happens anymore (with the title) but what is normal nowadays? We try to do our part, there is nothing else to do."

A blow for Klopp was Oxlade-Chamberlain going off injured with Liverpool going to Arsenal in the semifinals of the League Cup after a goalless first leg.

“We don’t know yet but he rolled his ankle and now we hope it is nothing serious," Klopp said.

West Ham twice came back against Leeds through Jarrod Bowen and Pablo Fornals but Jack Harrison's third goal sealed a 3-2 win for the visitors in east London. West Ham remains in fourth place but only by two points and having played more games than the teams below them chasing the final Champions League spot.

Arsenal in fifth place has two games in hand after getting Sunday's match at Tottenham postponed due to lack of players caused by coronavirus cases, injuries and the African Cup. Tottenham has now played four games fewer than West Ham and has only four points to eradicate.

Playing three games in a week has taken its toll on West Ham, including a 2-0 win over Norwich on Wednesday.

“I think it was a huge factor today,” West Ham manager David Moyes said. “The people who are putting in the games in place do not understand the importance of recovery.

“Today was really tough for us to get back out. We didn’t feel the Norwich game should have been put in, we let them know that but they refused our request. They wanted it played but it’s had an effect on today’s game. Maybe we’re not being tough enough, maybe we should have fought harder for it. Maybe I’m going to do that in the future.”

Leeds traveled to West Ham without nine first-team players — and two others went off injured before halftime — and had seven teenagers, including 15-year-old Archie Gray, on the bench.

But unlike Arsenal, which got Sunday’s game at Tottenham postponed due to a player shortage, Leeds manager Marcelo Bielsa didn't seek a postponement.

“There’s rules to ask for that type of thing and we didn’t meet the criteria to ask for a suspension of the game,” Bielsa said. “I think it was a triumph for the players. Each of them did things which indicated a very big desire to win.

“I clearly observed this was a game for each of the players, there was a determination in the search for the victory that was very visible today. I think the biggest factor in the game is when a footballer puts so much effort into what they do the virtues they possess come out.”