Rich Bisaccia steadied the Las Vegas Raiders after taking over during a tumultuous regular season, guided them to the playoffs for the second time in 19 seasons and earned the support of his players.

The first question facing the Raiders this offseason after a 26-19 loss to the Cincinnati Bengals in a wild-card game Saturday will be whether that's enough to remove the interim tag and make Bisaccia the full-time coach.

“I think we can all think that he’s the right guy,” quarterback Derek Carr said after the game. “He’s proven that people listen to him. Not just people but our team listens to him. I love him so much, I’m thankful for him. All those things will be decisions that I don’t make, I don’t get to make. I just play quarterback and do my best to complete every pass. But with everything that went on, if you really look at what happened, all the pieces missing, everything that changed. He held it together.” 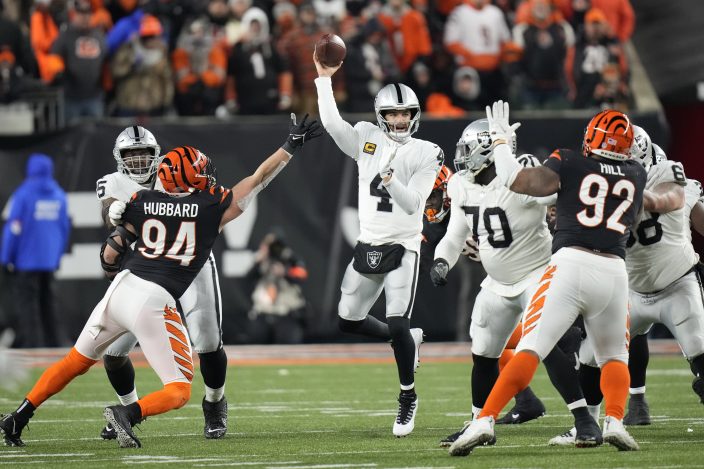 Bisaccia took over after Week 5 for his first stint as a head coach in a most difficult situation. Jon Gruden had built the team and was involved in every aspect of the organization before being forced to resign after the publication of his old offensive emails.

Bisaccia, a long-time special teams coach in the NFL, rallied the team together and helped lead the Raiders to back-to-back wins to make them 5-2 heading into the bye.

Then the Raiders were dealt another challenge when receiver Henry Ruggs III was charged with felonies in a fatal DUI crash that killed a 23-year-old woman. Ruggs was immediately released and the Raiders went into a tailspin, losing five of the next six games and looked as if they were playing out another lost season. 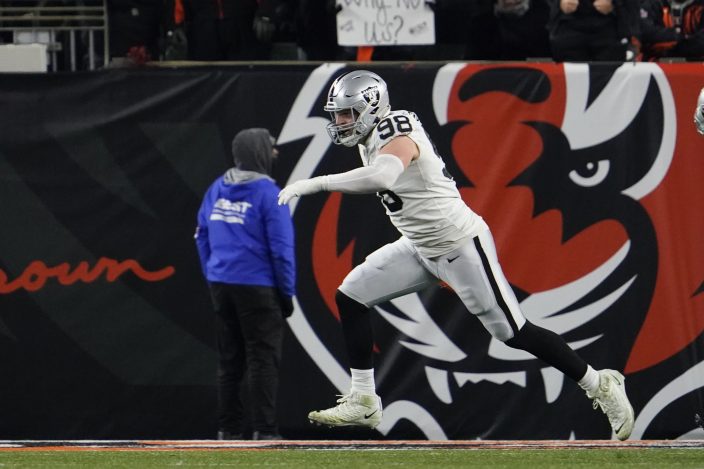 But the players never quit and Las Vegas won the final four games by four points or fewer to make the playoffs for the second time in the past 19 seasons before falling short on the final drive in Cincinnati.

“If it was up to me, I think everyone in the world knows what my decision would be. I love Rich. You know, I’m biased, obviously. But he’s a great coach,” star defensive end Maxx Crosby said. “He came in and got us to 10 wins. We came on the road, on a short week and gave Cincinnati everything they could handle. It just shows, you know, Rich is a great leader. One of the best people I know. One of the most honest dudes I know. I’ll go to bat for him any day of the week.”

The Raiders were the first team since the 1961 Houston Oilers to make a coaching change during the season and make it to the playoffs.

Now owner Mark Davis must decide if that's enough to run it back with Bisaccia or to find someone new to help the franchise make the next step.

Davis had the option to start interviewing candidates during the final two weeks of the regular season, but opted to wait until Las Vegas' season came to a close.

He's required to go through a coaching search and comply with the Rooney Rule which requires interviews with minority candidates before making any final decision.

While the players are publicly backing continuity, they know change could be coming.

“We're just going to wait and see,” defensive end Yannick Ngakoue said. “Time will tell a lot of things, around the whole league, not just organization. Each and every year, people have changes. That's just part of the game.”