Japan's Prime Minister Fumio Kishida on Monday said fighting the pandemic was a “top priority” in his speech opening this year's parliamentary session, as the Tokyo region was hit by surging infections.

“I will devote my body and soul to win this fight against the coronavirus,” Kishida said in his speech before the lower house, which marked the start of its new 150-day session. He called on people to help each other to overcome “the national crisis" of the pandemic. 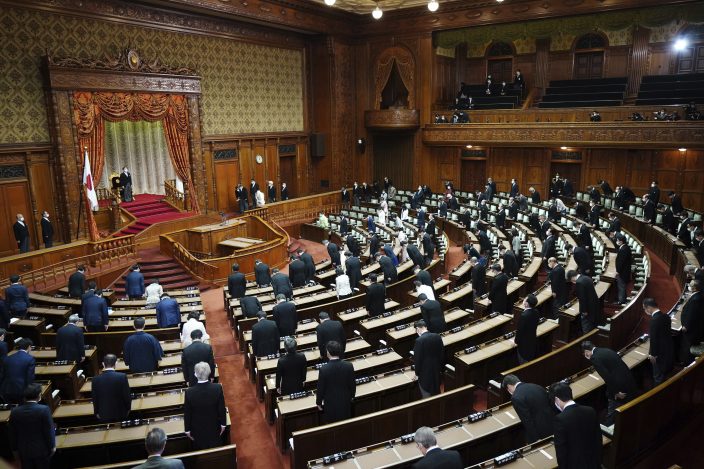 The Japanese capital reported 4,172 new cases on Sunday, raising the hospital bed occupancy rate to 19.3%. Tokyo authorities have said that when that rate breaches 20%, they will request the government place the area under pre-emergency status and move toward restrictions like working from home and shorter hours for eateries.

Kishida reiterated his plans to keep Japan's stringent border controls in place, banning most foreign entrants until the end of February, while the country tries to speed up booster shots of COVID-19 vaccines and reinforce medical systems to support an increasing number of patients being treated at home.

The highly transmissible omicron variant has driven infections higher and started to paralyze medical and public services in some areas, as more people are forced to self-isolate. Japan last week trimmed the 14-day quarantine period to 10 days. 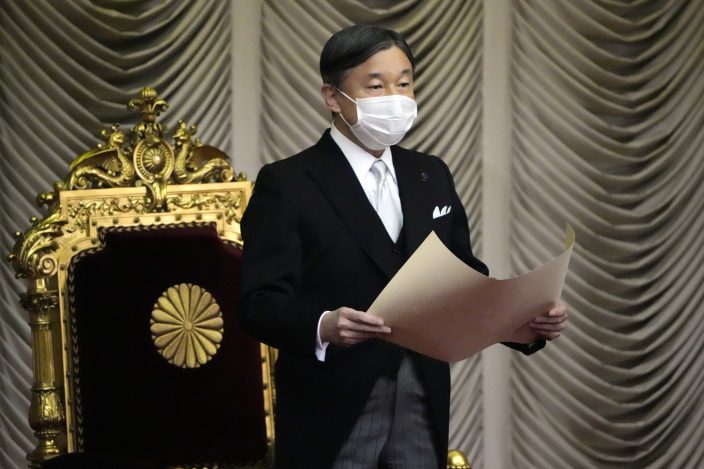 Japan's Emperor Naruhito wearing a face mask to protect against the coronavirus reads a statement to formally open a Diet session at the upper house of parliament Monday, Jan. 17, 2022, in Tokyo. (AP PhotoEugene Hoshiko)

Kishida urged companies to promote remote work, and called on schools to use online classes flexibly. Booster shots only started last month with medical workers and so far less than 1% of the population has had their third jab.

Japan recently cut the wait between a second and third shot for elderly people to six months from eight. In part because of a shortage of imported vaccines, most younger Japanese are not expected to get their turn until March.

In his parliamentary speech, Kishida also addressed what he said was an “increasingly severe and complex" regional situation. “I'm determined to protect the people's lives and daily life," the premier vowed.

Japan's Emperor Naruhito wearing a face mask to protect against the coronavirus reads a statement to formally open a Diet session at the upper house of parliament Monday, Jan. 17, 2022, in Tokyo. (AP PhotoEugene Hoshiko)

North Korea's repeated and escalating test-firing of ballistic missiles “are absolutely not permissible and we should not overlook its significant progress of missile technology," Kishida added. 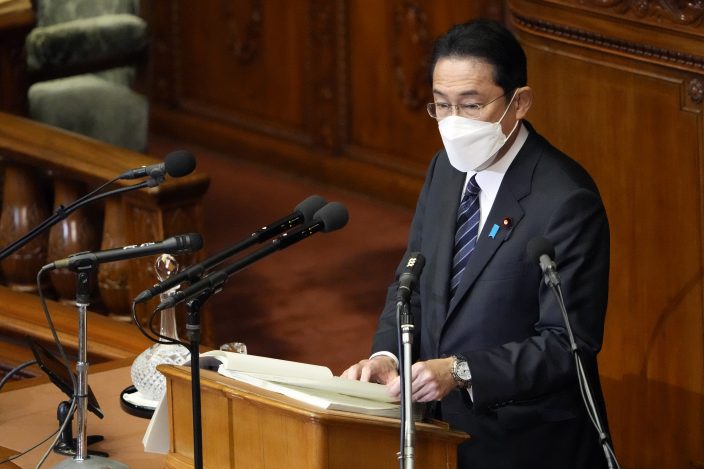 Japanese Prime Minister Fumio Kishida delivers his policy speech at the lower house Monday, Jan. 17, 2022, in Tokyo. Kishida on Monday said fighting the pandemic was a “top priority” in his speech opening this year's parliamentary session, as the Tokyo region was hit by surging infections. (AP PhotoEugene Hoshiko)

Kishida is set to hold an online summit with Pesident Joe Biden on Jan. 21 as the two leaders seek to further strengthen bilateral ties, Tokyo and Washington announced Monday.

Kishida called the U.S. alliance “the lynchpin of Japan's diplomatic and security policies."

Kishida, who is from the city of Hiroshima that the U.S. attacked with an atomic bomb in World War Two, also said he sought "a world without nuclear weapons" and plans to launch a conference with former and serving world leaders on phasing out nuclear weapons. He said he hoped the initiative would have its first meeting in his hometown this year.

Kishida pledged to promote energy reforms to meet the target of reaching carbon neutrality by 2050. He said he supported the use of “innovative” nuclear energy, nuclear fusion technology as well as renewables to meet this goal.

Kishida set to be reelected Japan's PM in parliamentary vote