Sofia Kenin was the Australian Open champion in 2020, and made it to the final of the French Open, too, that year, when she climbed to a career-high ranking of No. 4.

“It’s not easy, but it’s just a number. It doesn’t change who I am. I’m still that person who everyone respects very much,” Kenin said of her WTA ranking status. “Obviously, it’s not the best news. ... But I don’t have a doubt I can get back there.” 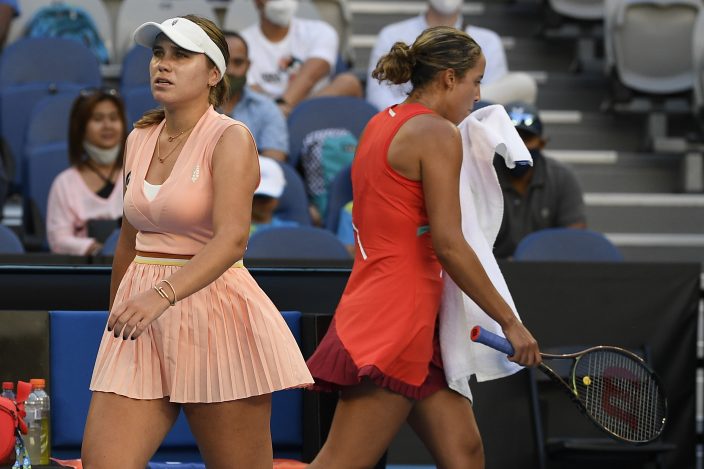 Sofia Kenin, left, of the U.S. walks past compatriot Madison Keys during their first round match at the Australian Open tennis championships in Melbourne, Australia, Monday, Jan. 17, 2022. (AP PhotoAndy Brownbill)

Keys, also a former Top 10 player who reached the Australian Open semifinals in 2015, used 16 aces to extend her recent run of success: She is coming off a hard-court title at Adelaide on Saturday.

“Just some unforced errors and some forced errors -- because Maddy forced them. I was right there. It’s disappointing,” Kenin said. “It’s a little bit of a bummer.”

Last season was difficult for her: She was off the tour for the second half of the year because of a foot injury and a bout with COVID-19. 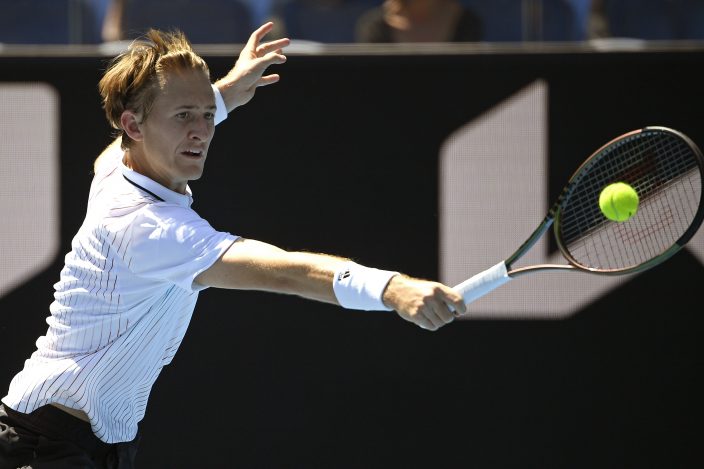 Sebastian Korda of the U.S. plays a backhand return to Cameron Norrie of Britain during their first round match at the Australian Open tennis championships in Melbourne, Australia, Monday, Jan. 17, 2022. (AP PhotoAndrew Brownbill)

Her ranking has remained as high as it has thanks in large part to getting to hold onto the points she earned by winning the trophy at the Australian Open two years ago. But after a second-round loss in 2021, she now departs even earlier.

Sebastian Korda is part of a long line of Australian Open champions of one sort or another. 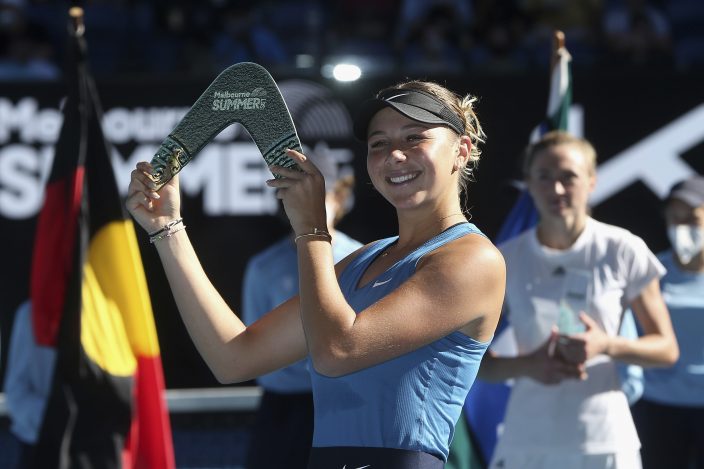 Amanda Anisimova of the United States holds the winner's trophy after her singles match against Aliaksandra Sasnovich of Belarus during the women's final of the Summer Set 2 tournament ahead of the Australian Open in Melbourne, Australia, Sunday, Jan. 9, 2022. (AP PhotoHamish Blair)

His father, Petr, won the Grand Slam tennis tournament in 1998; each of his sisters, Nelly and Jessica, has won the LPGA golf event that goes by the same name; and Sebastian himself was the junior champion at Melbourne Park in 2018.

Until Monday, Sebastian, a 21-year-old American, never had played in the main draw of the Australian Open, opting to play lower-level Challenger Tour a year ago instead of trying to qualify in Melbourne. His main-draw debut was quite a success Monday, a 6-3, 6-0, 6-4 victory over 12th-seeded Cam Norrie of Britain, who played college tennis at TCU.

“A lot of kind of history in the family here,” Korda said.

He tested positive for COVID-19 when he arrived in Australia intending to play a couple of tune-up tournaments, which he had to withdraw from. But Korda said he was asymptomatic and was able to stay in shape and prep somewhat for the year’s first Slam because Tennis Australia gave him some gym equipment “so I wouldn’t just sit around and kind of do nothing.”

Korda, who has been to the fourth round at Wimbledon and the French Open, said he didn’t feel rusty playing his first match of the new season.

And Norrie, a left-hander who won the hard-court title at Indian Wells last year, didn’t think Korda looked rusty, either.

“Any time I had a chance to kind of come back, he served his way out of it,” Norrie said. “And, yeah, on the bigger points he was much better than me.”

Norrie wasn’t exactly pleased with his own effort, though, describing it as “maybe my worst match in the last eight months or so. Disappointing.”

WINNING ON A ROUGH DAY

Amanda Anisimova found the going rough Monday at the Australian Open. Her head was not in the right place, she said, and she dropped the opening set. She finished with far more unforced errors, 39, than winners, 26.

Still, she managed to come through with a victory.

“Today was kind of an off-day for me. I had some personal stuff, so I was not completely there in the match and it was, like, very difficult to play,” Anisimova said after beating Dutch qualifier Arianne Hartono 2-6, 6-4, 6-3 to set up a second-round matchup against Tokyo Olympics gold medalist Belinda Bencic.

“I think people forget that, also, tennis players are human beings,” said Anisimova, a 20-year-old from New Jersey, “so sometimes we can’t play our best tennis if something happens.”

Asked whether she wanted to share what she was going through, Anisimova replied, “No, that’s OK,” and chuckled.

She was a French Open semifinalist as a teen in 2019; a few months later, her father, who also was her tennis coach, died suddenly.

Anisimova recently struck up a coaching partnership with Darren Cahill, who helped Simona Halep become a Grand Slam champion. The Anisimova-Cahill duo got off to a strong start with a title at a hard-court tuneup tournament played at Melbourne Park in the first week of January.

Cahill, Anisimova said, has helped her “sharpen” her backhand and serve in a match’s tight moments. He’s also worked with her on improving her mindset.

“It’s kind of just putting me in a good place ... just helping me stay relaxed and calm,” Anisimova said.