After taking over last month from Angela Merkel as leader of the EU’s most populous nation and its largest economy, Scholz joined Sánchez in the selected group of progressive EU politicians holding office. Both leaders also head unprecedented coalition governments in their respective countries.

Sánchez greeted Scholz at the stairs of the Moncloa Palace in the outskirts of Madrid, which hosts the Spanish prime minister’s office and residence. The two were expected to hold talks over lunch before holding a joint press conference. 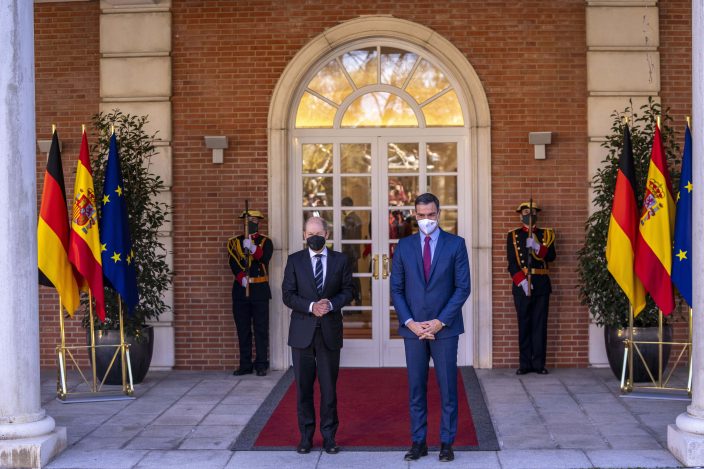 The meeting with Sánchez, a fellow member of the European Socialists’ group, marks Scholz’s first foreign trip this year, after visits to Paris, Brussels and Rome since taking office.

The talks were expected to center around ways to strengthen social democratic policies in the EU as countries try to launch economic recoveries after the sharp losses caused by the coronavirus pandemic.

Mounting tensions along Ukraine’s border with Russia was also expected to be high on the agenda. 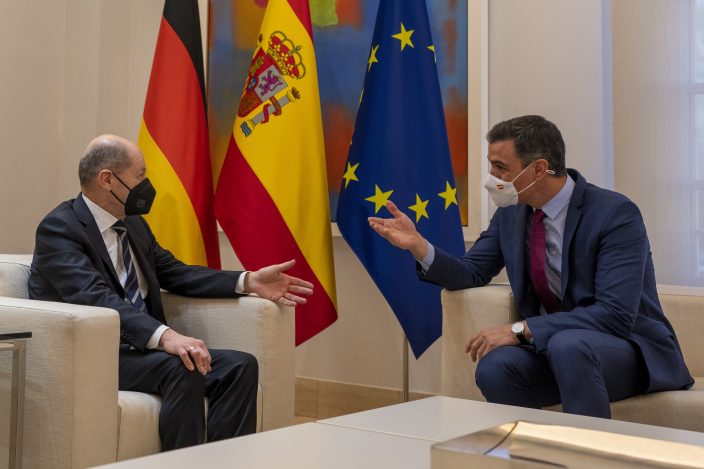 Madrid in June is hosting a major conference of the North Atlantic Treaty, or NATO, in which members of the defense alliance are expected to introduce new strategic guidelines.

German Chancellor Olaf Scholz, center, talks to journalists on a government plane after departing to Madrid from the Berlin International Airport in Schoenefeld near Berlin, Germany, Monday, Jan. 17, 2022. Scholz travel to Madrid for a meeting with Spanish Prime Minister Pedro Sanches. (Michael Kappelerdpa via AP)