Matthew Stafford passed for 202 yards and two touchdowns and ran for another score in his first playoff victory, and the Los Angeles Rams roared out of the wild-card round with a 34-11 win over the Arizona Cardinals on Monday night.

Odell Beckham Jr. and Cooper Kupp made touchdown catches for the NFC West champion Rams (13-5), who will visit the defending Super Bowl champion Tampa Bay Buccaneers on Sunday for a spot in the NFC championship game. Los Angeles advanced in the postseason for the third time in the last four years under coach Sean McVay.

David Long also scored on a 3-yard interception return while the Rams’ defense harassed Kyler Murray into a calamitous playoff debut. Los Angeles jumped to a 28-0 lead and cruised in the first playoff game at SoFi Stadium, which will host Super Bowl 56 next month. 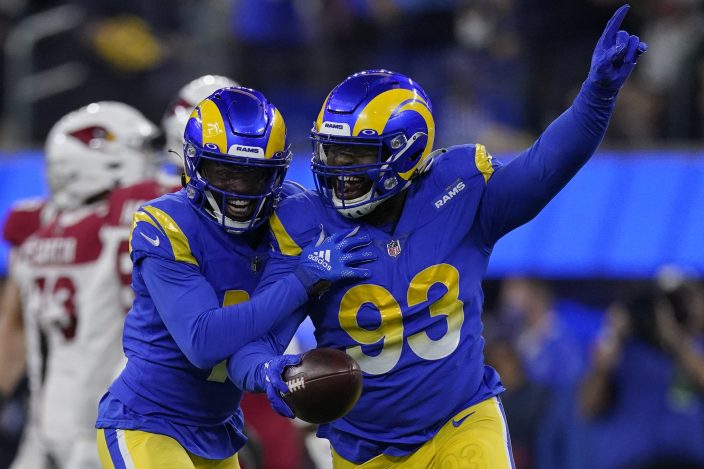 After an inconsistent finish to the regular season, the Rams’ constellation of big stars came together brilliantly on the postseason stage.

Stafford was outstanding in his first playoff game with the Rams, going 13 of 17 without an interception and coolly directing LA's offense while seizing his first playoff win in 13 NFL seasons — the first 12 spent in Detroit.

Beckham had four catches for 54 yards, including his first career playoff touchdown catch for the Rams’ first points. He also threw a 40-yard pass during his own first postseason victory. Linebacker Von Miller added six tackles and a key early sack in his first postseason appearance since winning the MVP award in Super Bowl 50. 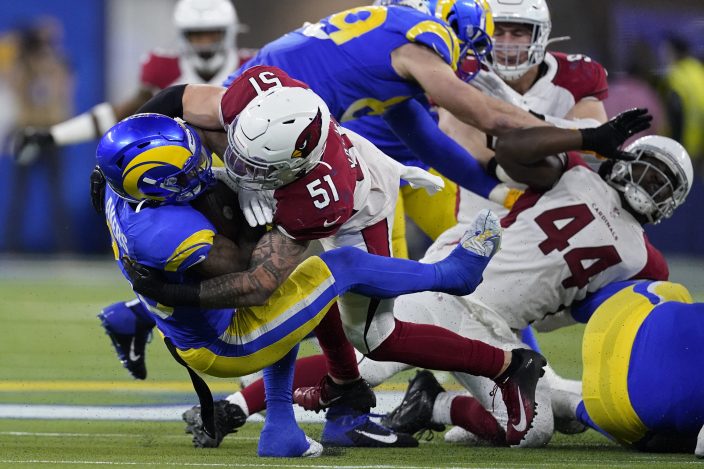 Murray went 19 of 34 for 137 yards and two interceptions for the Cardinals (11-7), who followed their 10-2 start with a 1-5 slide. Arizona lost on the road for only the second time in 10 games this season under coach Kliff Kingsbury, but fell to the Rams for the 10th time in the NFC West rivals’ last 11 meetings.

James Conner rushed for a TD for the Cardinals, who have one playoff victory since the 2009 season. Murray went 7 for 17 for 28 yards and threw two interceptions in an awful first half that left the Cardinals trailing 21-0 with just 40 yards of offense.

Los Angeles went up 21-0 when linebacker Troy Reeder’s pressure prompted Murray to fling the ball blindly out of the end zone to avoid a safety. Long made a shoe-top interception and took one stride to score the shortest pick-6 in NFL playoff history. 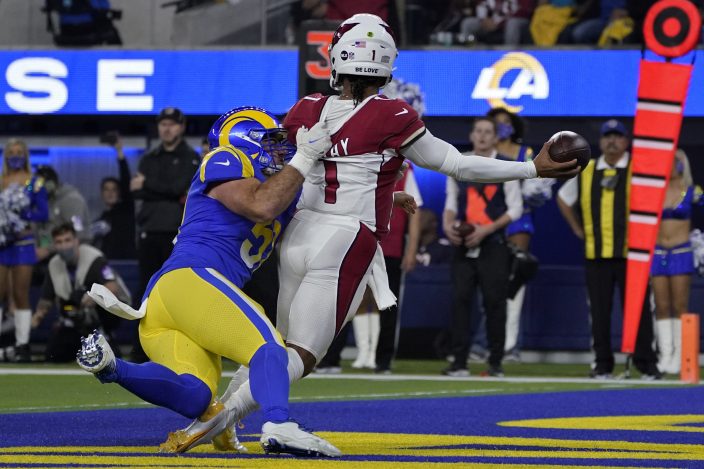 Los Angeles Rams inside linebacker Troy Reeder, left, pressures Arizona Cardinals quarterback Kyler Murray (1) into throwing a pass that was intercepted and returned for a touchdown by David Long Jr. during the first half of an NFL wild-card playoff football game in Inglewood, Calif., Monday, Jan. 17, 2022. (AP PhotoMark J. Terrill)

The Rams won even with a quiet night from NFL receiving leader Kupp, who had three receptions for 16 yards while the game was still in doubt. Kupp finished with five catches for 61 yards, failing to get 90 yards for only the second game this season — both times against Arizona.

The Rams capped their second offensive drive with Stafford's precise 4-yard throw to Beckham. The eight-year veteran wideout has six TD catches in his last eight games since he joined the Rams at midseason and filled the void left by injured Robert Woods.

Stafford scored his first playoff rushing TD since January 2012 to cap the Rams' next drive. 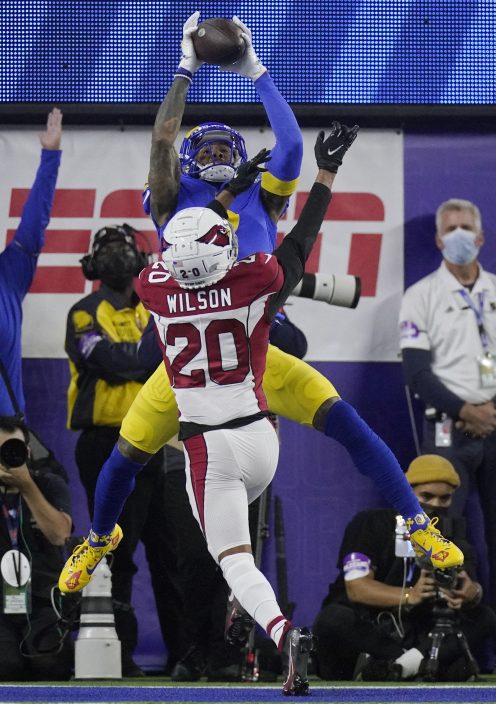 After Long's TD, the Cardinals finally got a first down seven minutes before halftime, but Rams lineman Marquise Copeland got his first career interception on a deflected pass.

Kupp's TD catch after halftime was set up by Beckham's 40-yard pass down the sideline to Cam Akers — the sixth completion of Beckham's eight-year career. 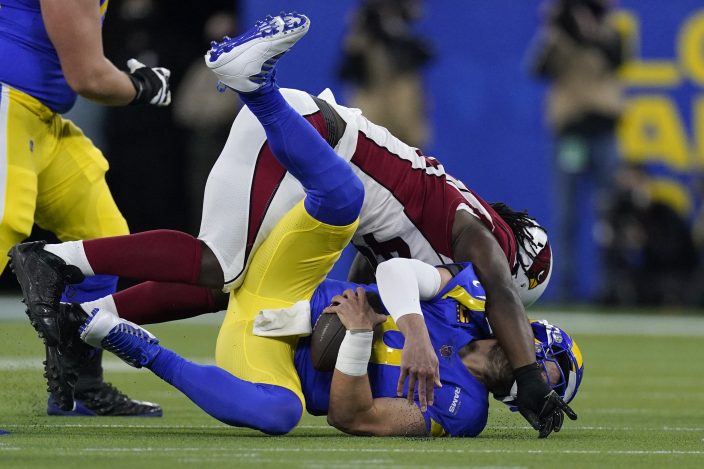 Eric Weddle got significant playing time for the Rams in the 37-year-old veteran's first NFL game since the 2019 season finale. The two-time All-Pro safety ended his retirement last week to help out after Los Angeles lost starters Taylor Rapp to a concussion and Jordan Fuller to a season-ending ankle injury.

Cardinals safety Budda Baker left the field on a stretcher in the third quarter after a helmet-to-helmet hit with Akers. Players knelt around Baker in concern before he was taken off the field. He was taken to a hospital for further evaluation but had movement in his extremities.

J.J. Watt had three tackles for Arizona in his first game since late October. The three-time NFL Defensive Player of the Year had shoulder surgery, but rushed back to help the Cardinals.

Long (knee) and Rams left tackle Andrew Whitworth (ankle) both missed time in the second half.

Cardinals: An offseason evaluation of what went wrong late in such a promising season.

Rams: A showdown with the Buccaneers and Tom Brady, who has a bit more experience with playoff pressure than Murray.