Bloomberg Philanthropies is supporting the innovative solutions of 15 cities to try to get others to use them as blueprints to battle the world’s urban problems.

The winners of this year's Global Mayors Challenge, announced Tuesday, span 13 nations and will make their solutions available to cities worldwide to replicate. They will each receive $1 million and technical support from the philanthropic organization of former New York City Mayor Michael Bloomberg to help develop and expand their programs.

They range from using technology to support tree maintenance in Sierra Leone to creating new farm models in the Philippines and addressing the opioid crisis in New Jersey through a public-private partnership that quickly delivers medication to reverse opioid overdoses. 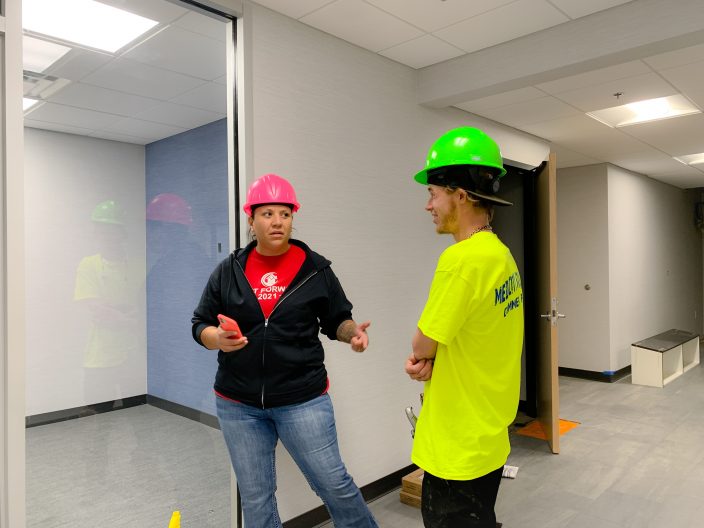 This image provided by Bloomberg Philanthropies shows Darcy Tello, left, owner of Med City Installation, and her employee, Trevor Hatton-York, visiting a worksite in Rochester, Minn., on Oct. 29, 2021. Tello is part of a team of Rochester residents co-designing a city program through the Global Mayors Challenge to create pathways for minority women to enter the fast-growing construction industry. (Anuja KCBloomberg Philanthropies via AP)

“As the world works to address the profound public health and economic effects of the ongoing pandemic, cities can implement innovative ideas at a pace that national governments simply can’t match,” Bloomberg, the billionaire founder of Bloomberg Philanthropies and Bloomberg L.P., said in a statement. “Our 15 winners offer bold, achievable plans to improve health, reduce unemployment, empower women, and more.”

The winning program in Turkey was inspired by the tradition of askıda ekmek, which dates to the Ottoman Empire and translates to “bread on the hook,” Istanbul Mayor Ekrem Imamoglu said. Some customers would pay for extra bread that bakers would put “on the hook” to let people know it was available to those who could not afford it.

Imamoglu transformed the concept into a network of mutual aid that allows donors and recipients to remain anonymous. He said the pay-it-forward program created a “feeling of solidarity” among people in Istanbul, whether they were giving or receiving.

It comes amid soaring consumer prices that have made it difficult for people in Turkey to buy basic goods.

The program started with utility bills, allowing those who wanted to help to check a city website to see the amounts of water and natural gas bills that needed to be paid.

About $14 million in utility bills have been paid through the program since it began last year, Imamoglu said. Istanbul's program then expanded to include scholarships for university students and packages that support new mothers and their children.

“I’m very happy to be able to introduce such a system because this project, it can go on forever, it’s very sustainable and renewable,” Imamoglu told The Associated Press through an interpreter, adding that if it would be adopted by other cities around the world, he would feel like “a very powerful angel.”

James Anderson, who leads Bloomberg Philanthropies’ Government Innovation programs, said the organization has high hopes for Istanbul’s program because “it’s government acting as a platform to make it easy for people to be good neighbors.”

Anderson said it was difficult to pick from the 50 finalists, who developed programs last year during the COVID-19 pandemic.

The winners “really represent the spirit of city innovation, the positive legacy that has come out of a very, very difficult period of time,” Anderson said.

Kim Norton, mayor of Rochester, Minnesota, said she wanted her city’s program to be bold. The home base of the Mayo Clinic and the $5.6 billion public-private Destination Medical Center decided to address two major issues — a lack of jobs for women of color, who were disproportionately displaced by the pandemic, and a shortage of construction workers.

They found only 1% of the construction jobs for Destination Medical Center went to women of color, even though they make up 13% of the population. Rochester's program encourages the industry to hire women of color and offers mentorship, training and support — including help with child care.

“It is vitally important for the businesses in my community to be successful, that we have a workforce able to repair our streets or build a new building, or, probably most desperately, build affordable housing for our community,” Norton said. “And we know we’re not alone in that need.”

Considering all the construction jobs to be funded by the Biden administration’s $1.2 trillion infrastructure spending bill, what Rochester has learned could inform other cities.

“I have a 12-year-old daughter, and I hope that she sees this program and can look at herself differently," said Karen Martinez, a field office assistant for the Education Minnesota union who worked on the initiative. “It’s hard for people to shift their mindsets. But once you have a pathway, once you have a model, once you see people who have gone through it, that shifts minds.”

The Associated Press receives support from the Lilly Endowment for coverage of philanthropy and nonprofits. The AP is solely responsible for all content.