In this sleepy Wyoming town that has relied on coal for over a century, a company founded by the man who revolutionized personal computing is launching an ambitious project to counter climate change: A nationwide reboot of nuclear energy technology.

Until recently, Kemmerer was little-known for anything except J.C. Penney's first store and some 55-million-year-old fish fossils in quarries down the road.

Then in November, a company started by Bill Gates, TerraPower, announced it had chosen Kemmerer for a nontraditional, sodium-cooled nuclear reactor that will bring on workers from a local coal-fired power plant scheduled to close soon. 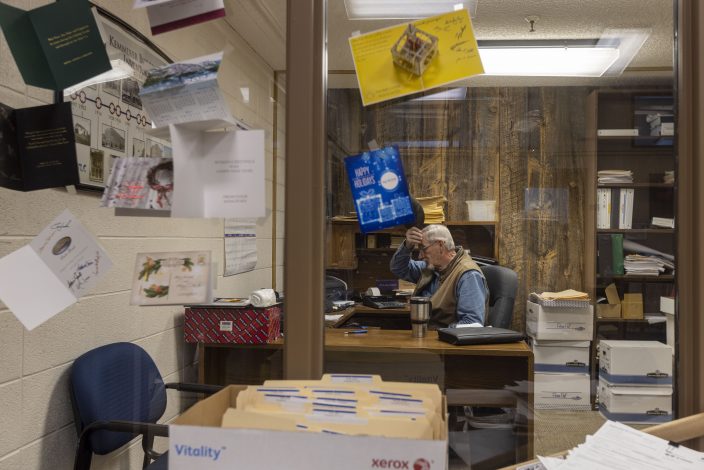 Mayor Bill Thek sits in in his office in City Hall, Wednesday, Jan. 12, 2022, in Kemmerer, Wyo. Thek said he was ecstatic about his town being chosen as the site of a nuclear reactor. (AP PhotoNatalie Behring)

The demonstration project comes as many U.S. states see nuclear emerging as an answer to fill the gap as a transition away from coal, oil and natural gas to reduce greenhouse gas emissions.

Many residents in Kemmerer, where the population of 2,700 is little-changed since the 1990s, see the TerraPower project as a much-needed economic boost because Rocky Mountain Power's Naughton power plant will close 2025. The plant employs about 230 and a mine that supplies coal exclusively to the plant — and is also at risk of closing if it can't find another customer — almost 300.

“Kemmerer needs something or it’ll become a dust bowl,” said Ken Spears, a 69-year-old retired coal mine worker whose family has depended on the mine and power plant for generations. 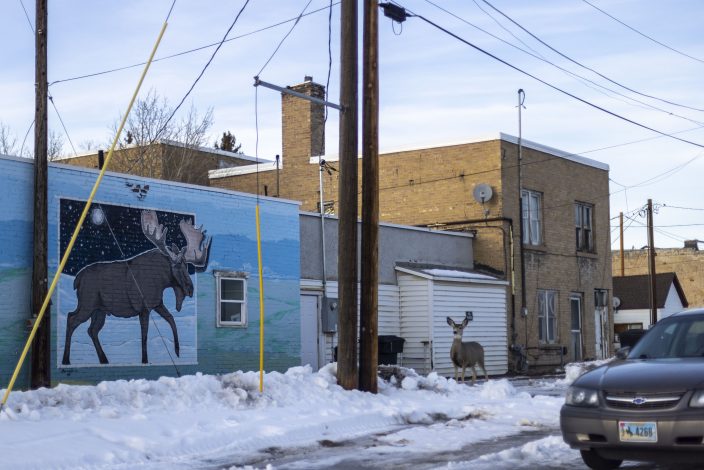 A deer wanders through the streets of Kemmerer, Wyo., Wednesday, Jan. 12, 2022. The town which has been reliant on the coal industry since its founding is facing a major shift when the nearby coal fired Naughton Power Plant closes in 2025 and a nuclear reactor will be built in its place. (AP PhotoNatalie Behring)

Spears was among a group of men who gathered recently in a downtown bar, Grumpies, near a park with statue of James Cash Penney and his first store. They played pool near an antique piano and signs reading “Let’s go Brandon” and “Trump 2020 No More Bull..."

Kemmerer is a quaint town of old-time storefronts and rolling hills, off the beaten path other than for occasional tourists who pass through on a slower, more scenic route to Grand Teton and Yellowstone national parks. Residents speak proudly of the coal heritage, quiet lifestyle and easy access to open lands where they can fish, hunt and hike. A river that is iced over in the winter runs through town nearby a railroad track that is down the hill from neighborhoods of older houses where families of deer roam at sunset.

Wyoming has the biggest coal industry in the U.S. by far. Trump won the state with some of his highest margins, almost 70%, in 2016 and 2020 on promises to shore up coal mining. 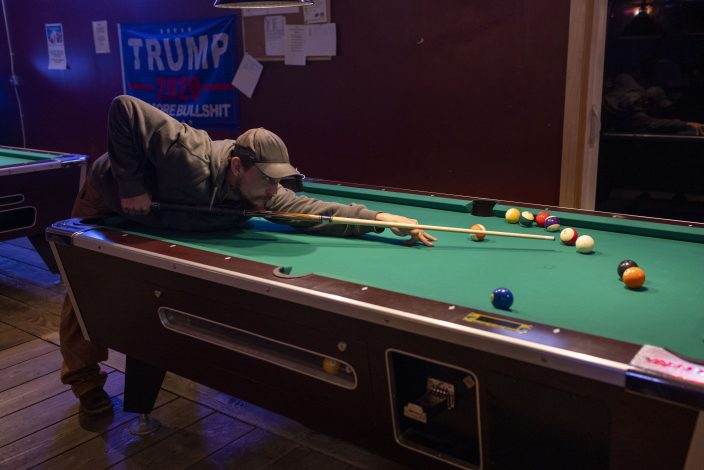 Coal miner Colt Quintard plays pool at a local bar Wednesday, Jan. 12, 2022, in Kemmerer, Wyo. Quintard said he isn't as convinced as others the nuclear plant will be as big a boon to the community. He fears many of the full-time workers will come from out of town due to the training needed and others will live in larger cities and commute. "I don't think this community is going to benefit from it the way a lot people think it's going to," said Quintard, who was raised in a nearby town of Big Piney. "Change is going to happen, regardless. There is nothing we can do." (AP PhotoNatalie Behring)

Yet concerns about TerraPower's unusual, coal-replacing nuclear plant seem few and far between in this town.

“This isn’t a Chernobyl-type thing,” said Spears, wearing a camouflaged jacket and University of Wyoming cap with the bucking-horse-and-rider logo. “Kemmerer needs something.”

The U.S. nuclear industry has been at a standstill, providing a steady 20% of the nation’s power for decade amid the costly and time-consuming process of building huge conventional nuclear plants. 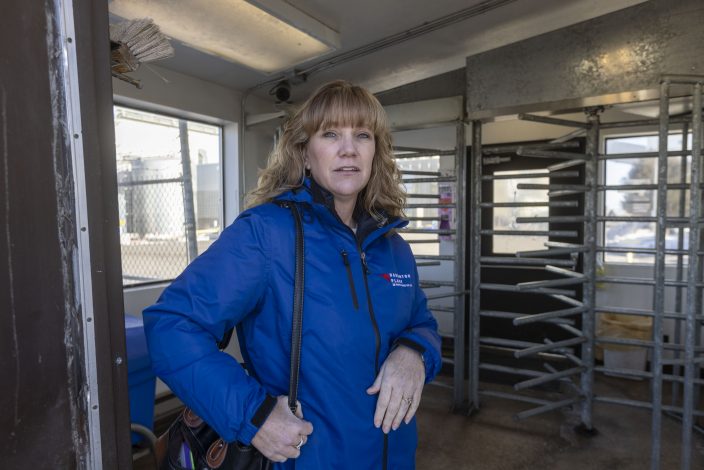 Crystal Bowen, a generation clerk at the Naughton Power Plant, arrives at the plant Wednesday, Jan. 12, 2022, in Kemmerer, Wyo. Bowen is hopeful about Kemmerer being chosen as the site of a nuclear reactor when the coal-fired power plant she works at is decommissioned in 2025, saying the plant should allow her and others with Rocky Mountain Power to shift to jobs at the new plant. "I don't know if Kemmerer would have survived if we lost the power plant and the coal mine. It may have just turned into a ghost town," said Bowen. (AP PhotoNatalie Behring)

Only one new commercial nuclear project, the Tennessee Valley Authority’s Watts Bar No. 2, has come online in the U.S. in the past 25 years.

By cooling the planned Kemmerer reactor with liquid sodium, a metal that boils at a temperature much higher than water and solidifies at well above room temperature, TerraPower says its relatively small, 345-megawatt plant, able to power about 345,000 homes, will be safe and less expensive than conventional, water-cooled nuclear plants. The company's Natrium plant will use a simpler and less expensive system of unpressurized coolant and vents not dependent on electricity to halt fission during an emergency.

The approach isn’t new. Russia has had a commercial sodium-cooled reactor in use at full capacity since 2016 and such designs have been tested in the U.S. 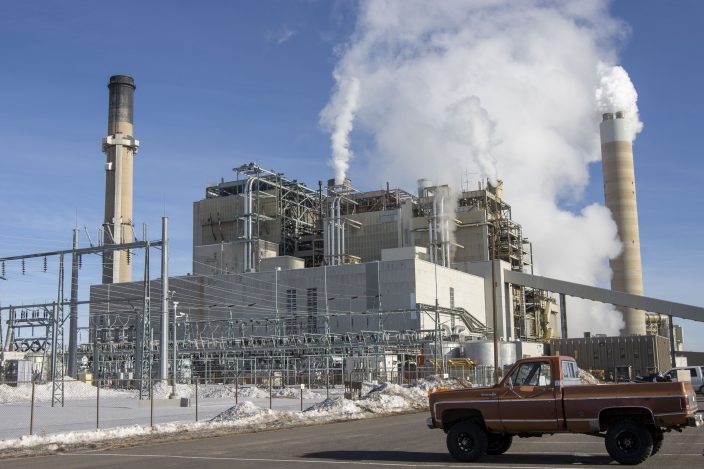 Steam billows from stacks at the Naughton Power Plant, Wednesday, Jan. 12, 2022 in Kemmerer, Wyo. While the power plant will be closed in 2025, TerraPower announced Kemmerer will be the site of a demonstration nuclear reactor. (AP PhotoNatalie Behring)

TerraPower plans to make its plant useful for today's energy grid of growing renewable power. A salt heat “battery” will allow the plant to ramp up electricity production on demand, offsetting dips in electricity when the wind isn’t blowing and sun isn’t shining.

“It should provide a more useful reactor, really, for operating on a grid that has a much greater amount of wind and solar than in the past," said TerraPower President and CEO Chris Levesque. 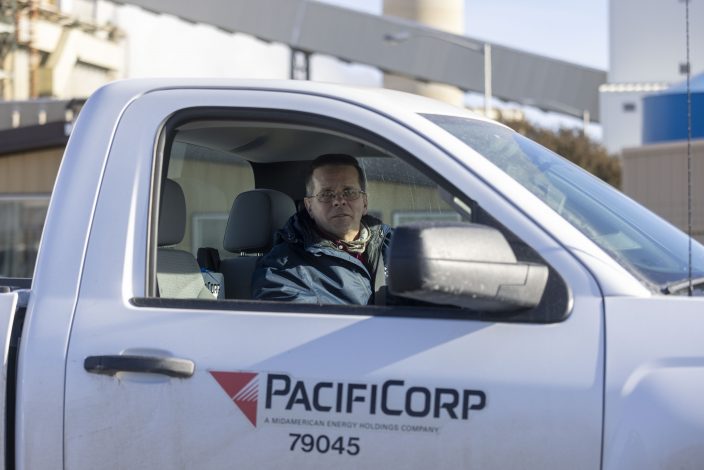 The project will cost up to $4 billion, half of it from the U.S. Department of Energy, but costs should come down as demand for carbon-free energy grows and more are built, said Levesque.

“If we can show that the plant can be built affordably and on time, we’ll have orders for additional Natrium reactors even before the first one starts up. In the 2030s, there will be massive demand for this kind of power," Levesque said.

One downside: The plant's fuel, at least at first, would need to come from Russia. The plant will require uranium fuel enriched to 20%, four times higher than in conventional nuclear plants. The U.S. doesn't currently enrich fuel to that level for commercial power. 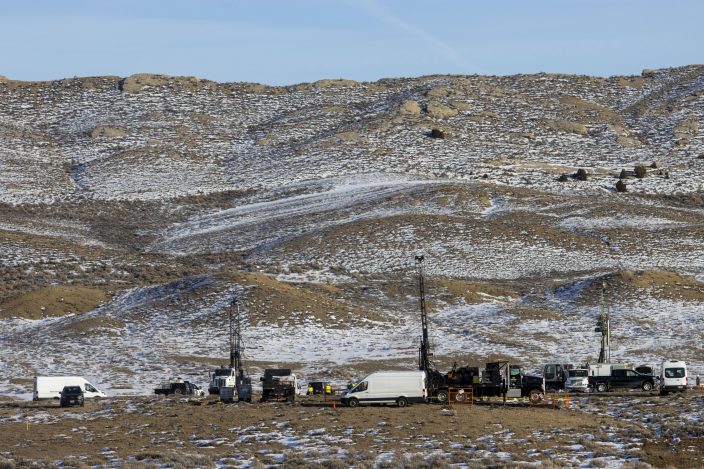 Geological testing takes place on the proposed site of a nuclear power plant south of the town of Kemmerer, Wyo., Wednesday, Jan. 12, 2022. The future construction built with backing from Bill Gates, The Department of Energy and Rocky Mountain Power will be one of the United State's first small modular reactors. (AP PhotoNatalie Behring)

For that matter, Levesque pointed out, about one-fifth of conventional nuclear fuel also is imported.

So far, concerns in Wyoming about the project have been few. The Wyoming Outdoor Council, noting the declining cost of solar and wind power, points out that nuclear remains costly and sodium-cooled in other countries have had leaks leading to fires and shutdowns.

In between games of pool at Grumpies bar, Colt Quintard, a 30-year-old coal mine worker, said he isn’t as convinced as others the nuclear plant will be as big a boon to the community. 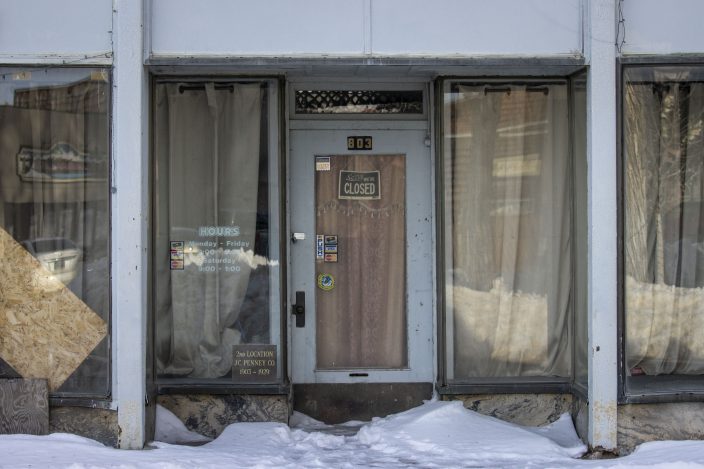 Snow drifts in front of a closed down shop, Thursday, Jan. 13, 2022, in Kemmerer, Wyo. The town which has been reliant on the coal industry since its founding is facing a major shift when the nearby coal fired Naughton Power Plant closes in 2025 and a nuclear reactor will be built in its place. (AP PhotoNatalie Behring)

He fears many of the plant's full-time workers will come from out of town due to the training needed and others will live in larger cities and commute. He’s open to getting training to work at the nuclear plant, but said more likely he’ll have go back to working around the county as a diesel mechanic, keeping him from being able to see his 2-year-old daughter each night.

“I don’t think this community is going to benefit from it the way a lot people think it’s going to,” said Quintard. “Change is going to happen, regardless. There is nothing we can do.”

Rocky Mountain Power employee Crystal Bowen has no such misgivings, saying the plant should allow her and others with Rocky Mountain Power to shift to jobs at the new plant. Bowen said her online research about the nuclear technology eased any concerns. 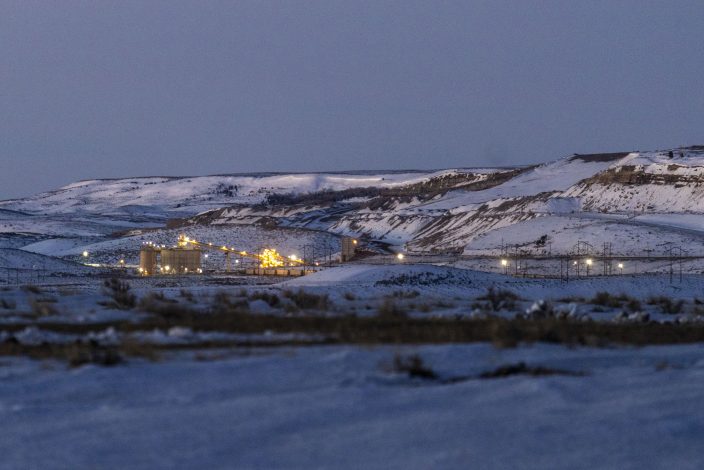 Lights illuminate a coal mine at twilight, Thursday, Jan. 13, 2022, in Kemmerer, Wyo. With the nearby coal-fired Naughton Powerplant being decommissioned in 2025, the fate of the coal mine and its workers is uncertain. (AP PhotoNatalie Behring)

“It was pretty shocking, back in 2019, when we heard that the fate of the plant wasn’t as long-lived as we thought,” said Bowen, who works in payroll and is a lifelong resident of the community. “I did not want to have to leave. I have children here. I have parents here and the idea of having to move to another location was pretty scary.”

She added: “I don’t know if Kemmerer would have survived if we lost the power plant and the coal mine. It may have just turned into a ghost town.”

TerraPower has pledged to train workers so anyone interested can transition to working at the nuclear plant when it opens, said Rodger Holt, manager of the Naughton coal plant. 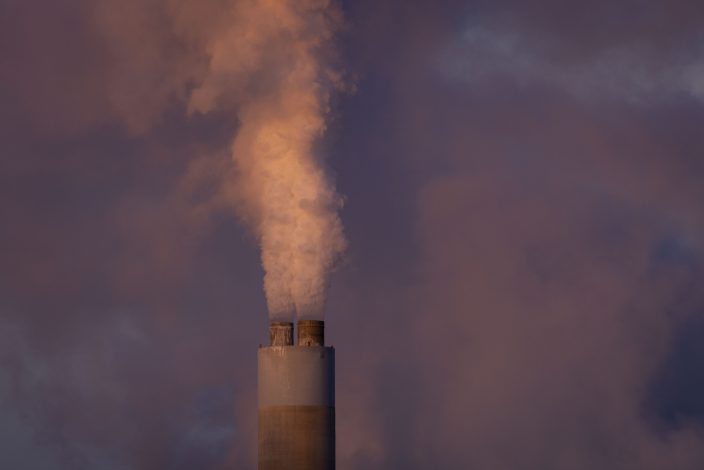 Kemmerer beat out three other Wyoming cities for the nuclear plant: nearby Rock Springs, Gillette in a coal-rich northeastern part of the state and Glenrock in east-central Wyoming. The Naughton plant employees, with experience on equipment such as generators that are used in both coal and nuclear plants, were a major reason for putting the plant in Kemmerer, according to TerraPower.

The plant remains years off — 2028 is the current estimate — but already has triggered interest in real estate and “breathes new life into the town,” Mayor Bill Thek said.

Gates’ reputation as a global supporter of developing and distributing vaccines — against COVID-19, malaria and other diseases that have killed millions worldwide — also have earned him skepticism in Wyoming, a deeply conservative state among the least vaccinated against the coronavirus.

Gates, the famous co-founder Microsoft, started Bellevue, Washington-based TerraPower in 2008 and is chairman of its board. When asked about the billionaire, most in town held their tongues.

Thek laughed when asked and said he didn’t want to “pick apart Bill Gates” and said “everyone knows who Bill Gates is,” while reminding that the U.S. government will pay for half of the project.

“He’s put his money into this and that’s it, period,” Thek said.

One thing Gates and Thek agree on: TerraPower’s planned Natrium plant could be key to cleaner energy not just for Kemmerer and Wyoming, but the world.

“I’m not really on that bandwagon that everything is going to be green,” said Thek, who describes himself as a conservative. “But I’m absolutely for saving our environment. If we get in on the ground floor of being part of saving and making our environment better, I’m all for that.”