Dak Prescott kept handing it to all the wrong people.

He should have delivered the football to umpire Ramon George instead of to his center Tyler Biadasz before time ran out on Dallas' season, leaving Cowboys fans ruminating the quarterback draw that was called with no timeouts and just 14 seconds left.

While Prescott and Cowboys coach Mike McCarthy were busy blaming the officiating for the botched finish that sealed the Cowboys’ 23-17 wild card playoff loss to the San Francisco 49ers, Prescott praised fans for throwing trash at officials as they skittered off the field. 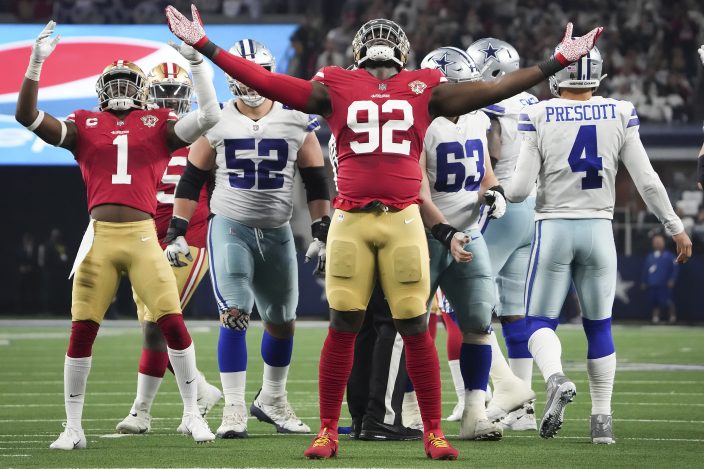 At first, Prescott eloquently condemned the fans' boorish behavior but it soon became clear he misunderstood the question and thought fans were hurling rubbish at his dejected teammates.

“No, I didn’t see that. That’s sad,” Prescott said. “... You’re talking about men that come out each and every day of their lives and give everything to this sport, give everything to this game of football. ... And for people to react that way when you’re supposed to be a supporter and be with us through thick and thin, that’s tough.”

Informed it was the officials that fans were pelting with beer cups and nacho cheese sauce, Prescott did a 180 and retorted, “Credit to them, then.” 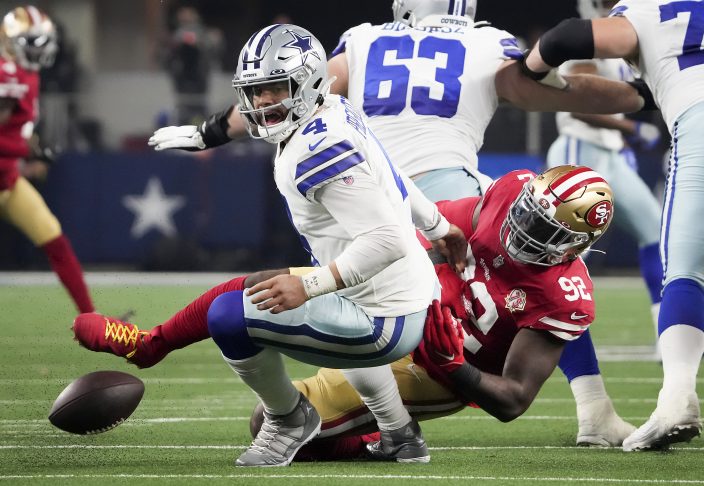 With those haunting words, Prescott delivered the epitaph for the ugly end to Dallas’ otherwise stellar season, and Jerry Jones was left to lament a 26th consecutive season without so much as a trip to the conference championship much less another Super Bowl appearance.

The NFL, by the way, said the officials got it right.

Referee Alex Kemp said the umpire did his job correctly as the final seconds ticked off the clock. He said George trailed the play by the proper length so he could view any possible infractions during the play and he said George properly spotted the ball after bumping into Prescott and Biadasz, causing a brief delay before the hike-and-spike that came a tick after the clock hit all zeroes. 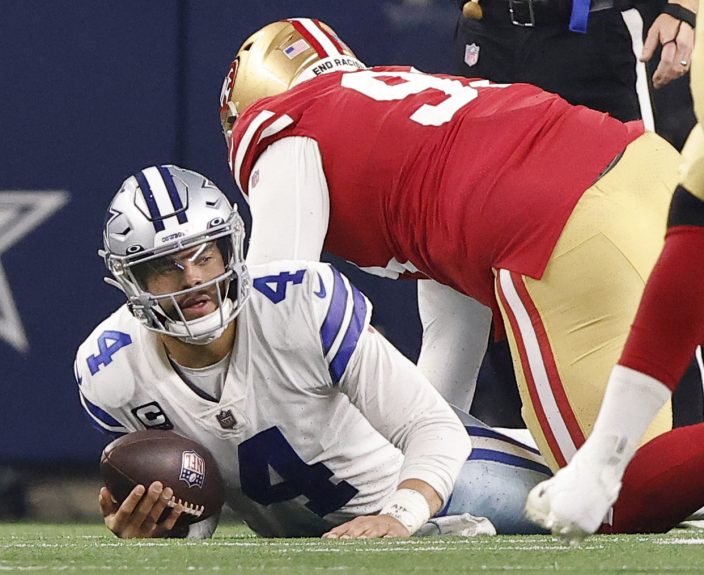 Before that, Prescott was brilliant in quickly moving the Cowboys downfield.

Dallas got the ball at its 20 with 32 seconds and no timeouts remaining. Prescott completed three consecutive passes, with the receivers getting out of bounds each time, and there were 14 seconds left when he ran 17 yards to the 49ers 24, then handed the ball to his center and lined up for the spike so he could get one shot at a game-winning touchdown toss.

You’d think a $40-million-a-year quarterback would know what every NFL fan does: the umpire has to spot the ball before it can be snapped again.

McCarthy defended the quarterback draw as the proper call in that situation even though it risked the very outcome that transpired. The 49ers had three down linemen and were defending the sideline, so the middle of the field was wide open.

“It’s the right decision,” McCarthy said. “We shouldn’t have any problem getting the ball spiked.”

ESPN analysist Jeff Saturday, who played center in the NFL for 14 seasons, said Prescott goofed by not sliding down sooner and by not looking to hand the ball to the umpire.

“Dak has to understand you really want to go down at 10 seconds. So, he ran a second or two too long," Saturday said. “The other most important part: keep the ball in your hand. You are going to hand the football to the referee, so none of the rest of this stuff makes any difference because when you hand it to him, the offensive line will be looking back, understanding he's going to get through to spot the ball and you can spike it.

“There was enough time when he went down, if he holds the ball in his hand, doesn't give it to the center," Saturday said. "And here's the biggest thing: usually when you're running these 2-minute situations, it's between a receiver, a tight end or a running back and they literally are taught to go run the ball to the official. Don't throw it because they might drop it. Hand it to him on the way to the hash that the ball is going to be spotted.”

Prescott was standing at the hashmark.

“All he has to do is hand the ball to the referee who is going to run to him to him to get it, secure it and put it down," Saturday said.

There were 5 seconds left when the umpire got to the line of scrimmage and had to work his way past Prescott and Biadasz to get to the ball that the center had placed on the turf.

These sorts of things are practiced on a weekly basis.

“The referee has to make his way through because the ball can't be placed until he touches it," Saturday said. "The center can't place it. The quarterback can't place it. So, it's uber-frustrating for all the Cowboys fans, but the reality is when you practice this week in and week out you have either referees on the field or an equipment manager who's going to take it and spot it.”

Dallas offensive coordinator Kellen Moore, the architect of the NFL's highest-scoring offense, now has a calendar cleared to schedule all those interviews for head coaching jobs. He'll surely be asked about that last play when he talks to the Broncos, Jaguars, Dolphins and Vikings about their vacancies.

The Cowboys can book their trips to Cancun now while mourning the wild finish that will live in 49ers-Cowboys playoff lore like “The Catch” by Dwight Clark and Roger Staubach's frenetic fourth quarter rally that earned him the nickname “Captain Comeback.”

“Dawdling Dak” might come to define this installment, one that drew immediate derision across social media and which Peyton Manning even alluded to Monday night during the Rams-Cardinals wild card game.

When the Rams defenders didn't immediately touch a Cardinals receiver after a diving catch, Eli Manning suggested they were waiting for the receiver to pop up so they try punching the ball out for an “easy turnover.”

“ I'm old school,” Peyton Manning replied. “Just touch the guy down, right? Just hand the ball to the umpire in a 2-minute drill, right? Let's just do some of the basics the right way.”