The dynamic quarterback and his Arizona Cardinals teammates had about the worst start imaginable in Monday night's 34-11 loss to the Los Angeles Rams in the NFC wild-card round. By the time the Cardinals got their initial first down, they were trailing 21-0 midway through the second quarter.

“We didn't even make it a game,” said Murray, who completed 19 of 34 passes for 137 yards and two interceptions. “I put a lot on my shoulders. To play the way I did was disappointing.”

The Cardinals went three-and-out on their first four possessions, the first time that's happened in a playoff game in at least 10 seasons. They were outgained 180-40 in the first half and averaged just 1.5 yards per play, the second-worst average in a playoff game over the last 20 seasons.

Murray was under pressure from the start. He was sacked twice in the first half and was nearly brought down for a safety in the second quarter before throwing an ill-advised pass that was picked off by David Long for a 3-yard touchdown return to make it 21-0.

Murray was unable to find any success throwing downfield. He completed only one pass beyond 15 air yards on eight attempts, and 11 of his 34 attempts were passes behind the line of scrimmage. 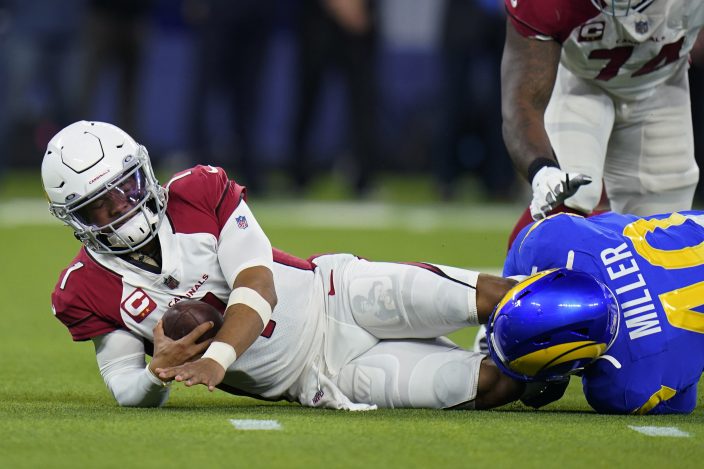 “It just got out of hand early. You have to be able to run the ball on those guys. When you get into a passing game, they have three of the best pass rushers along with good players on the back end,” Murray said.

The Cardinals came into the game 10th in the league in rushing, averaging 122 yards per game, but were held to a season-low 61 against the Rams. Murray had a season-low two rushing attempts and gained six yards.

“I just think overall as an offense we were just out of sync on a couple of things early that could have changed the game,” coach Kliff Kingsbury said. “We never got in a rhythm and they made some big plays.” 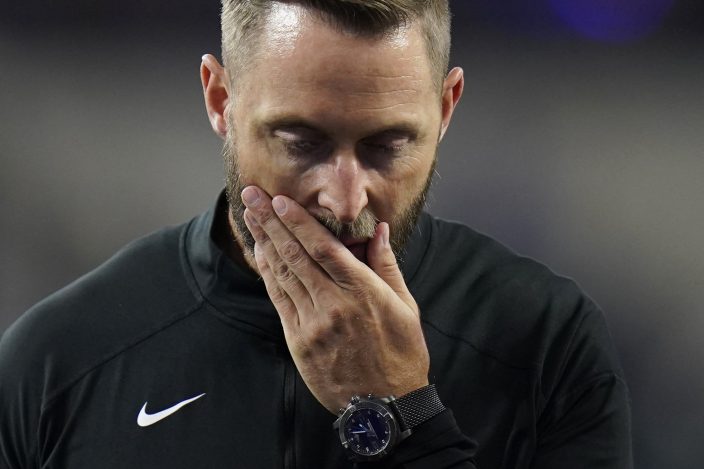 Arizona's only touchdown came midway through the third quarter when James Conner's 2-yard run capped a 12-play, 75-yard drive to get the Cardinals within 28-8. That drive also marked the first time Arizona crossed midfield.

“When you have negative play after negative play, it’s just hard to get yourself out of that,” wide receiver Christian Kirk said. “Once we did get on a roll in the second half we started doing some good things, but it was just too late.”

The blowout loss continued a trend during Kingsbury's tenure — fast starts to the season before collapsing down the stretch. Arizona won its first seven games and was the NFL's last unbeaten team, making it one of the early favorites in the NFC.

At 10-2, the Cardinals had the NFC's best record and a two-game lead in the West before they lost four of their final five regular-season games and fell to the fifth seed.

Defensive lineman J.J. Watt was activated off injured reserve before the game after undergoing shoulder surgery in late October. Despite his return, the 11-year veteran couldn't hide his disappointment over the result.

“From what we were capable of doing and showed what we can do, there’s no other way than to describe this as a failure," Watt said. "You get to enjoy the highs but you have to live with the lows. We started the season great and finished terrible.”