Formula One racing got a huge boost in interest in North America through the Netflix series “Drive to Survive.”

Netflix now is expanding to a documentary series on golf, with the PGA Tour and the organizers of the four major championships granting access for a behind-the-scenes look. Among those who have signed up (without pay) to participate are multiple major champions like Jordan Spieth, Brooks Koepka, Dustin Johnson and Collin Morikawa. Also on the list are Max Homa and Joel Dahmen, who have revealed their personalities through various social media.

For the players, it’s a chance to increase their exposure and grow their brands. Koepka was said to have spent an hour with the producers during the Hero World Challenge. 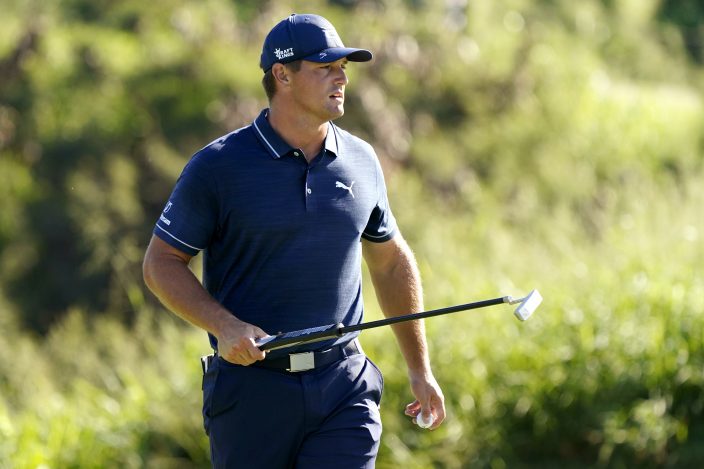 Bryson DeChambeau walks off the first green after making par during the final round of the Tournament of Champions golf event, Sunday, Jan. 9, 2022, at Kapalua Plantation Course in Kapalua, Hawaii. (AP PhotoMatt York)

Rick Anderson, the chief media officer at the PGA Tour, said the Netflix series will allow golf to tap into a new and diverse audience and “give fans an an authentic look into the real lives of our athletes, and what it’s like to win — and lose — during a season on the PGA Tour.”

Golf, however, will have competition in the Netflix sports documentary space.

Tennis also will have a series with Netflix in partnership with the ATP Tour, the WTA Tour and the four Grand Slam tournaments, starting with the Australian Open this week. That is sure to include the drama of Novak Djokovic, who is not vaccinated against COVID-19 and was given an exemption to enter Australia, only to be deported when Australian authorities revoked his visa. 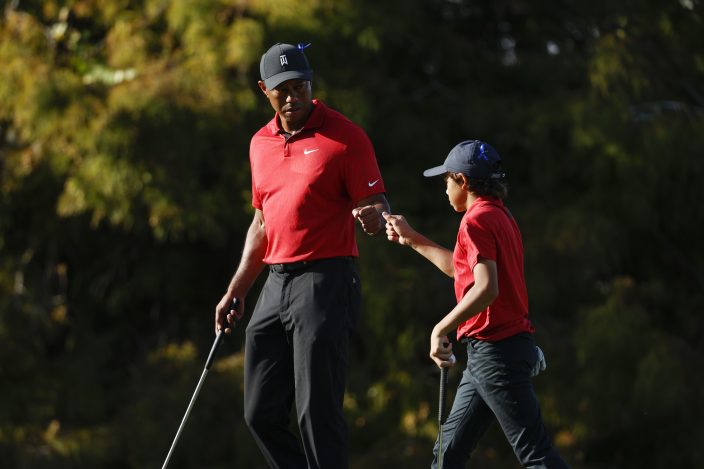 FILE -Tiger Woods fist bumps his son Charlie Woods on the 16th green during the second round of the PNC Championship golf tournament, Sunday, Dec. 19, 2021, in Orlando, Fla. Speculation for 2022 starts with where Woods will show up next on the PGA Tour. (AP PhotoScott Audette, File)

What makes the tennis series different from golf's is that it will include men and women, who play their Grand Slam events at the same venues.

Missing from the list of PGA Tour players is Jon Rahm, the No. 1 player in the world, FedEx Cup champion Patrick Cantlay and Rory McIlroy. Also missing is Bryson DeChambeau, who said last week while promoting the Saudi International that it “wasn’t a deal that was struck that was very well for my side.”

DeChambeau said people already get a good look at his life through a YouTube channel and Instagram. He said the Netflix golf series would be “cool to see” and have interesting stories to be told about players not as well known, like Harry Higgs. 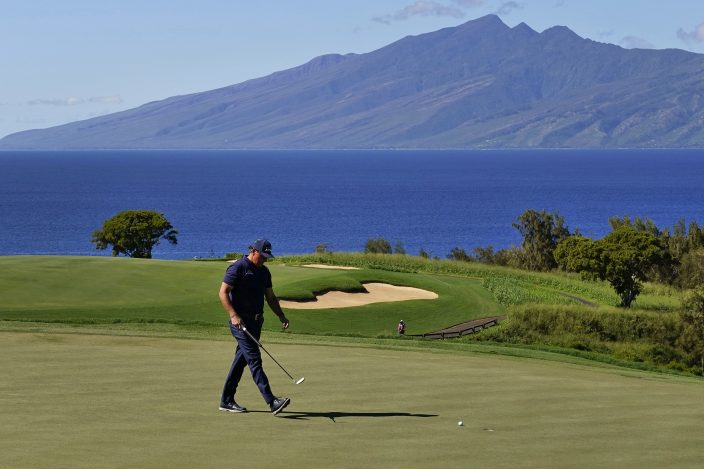 Phil Mickelson walks to his ball after missing his birdie putt on the 13th green during the third round of the Tournament of Champions golf event, Saturday, Jan. 8, 2022, at Kapalua Plantation Course in Kapalua, Hawaii. (AP PhotoMatt York)

“I don’t want to take the light away from them for their potential to grow themselves in a manner that’s unique to them, where they’re already pretty far behind,” he said. “They have the opportunity to grow a lot more than I do in that regard.”

Tiger Woods is a lead investor in a special purpose acquisition company (SPAC) that hopes to raise $150 million in an initial public offer to acquire a sports and health technology company. 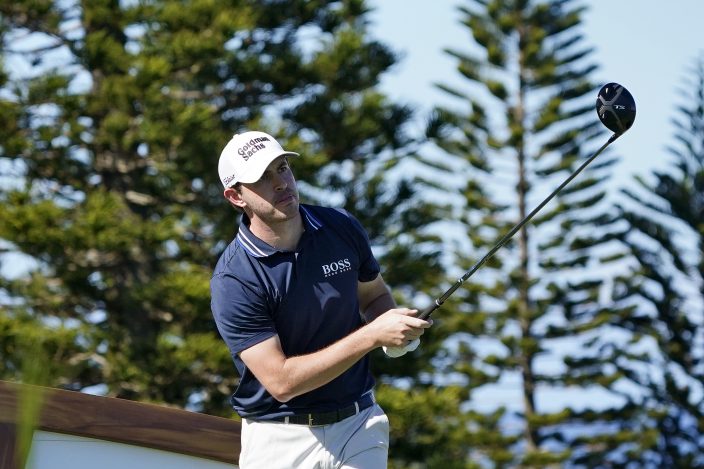 The SPAC is Sports & Health Acquisition Corp., and it indicated in a prospectus filed with the SEC that it wants to target a company valued between $600 million and $1 billion.

A SPAC is often referred to as a “blank check” entity designed to go public without having to deal with the traditional IPO process.

The prospectus, filed last week, said it wanted to target business in the sports and health technology sectors with three verticals — fan engagement, consumer-facing health and fitness technologies, and health and well-being. 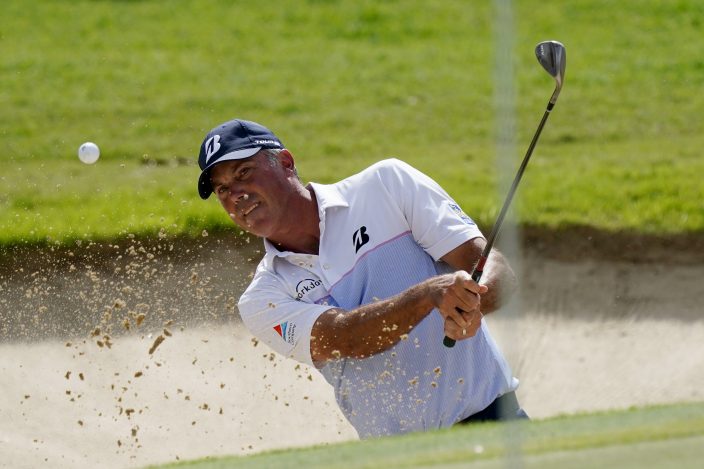 Matt Kuchar hits out of the first bunker during the final round of the Sony Open golf tournament, Sunday, Jan. 16, 2022, at Waialae Country Club in Honolulu. (AP PhotoMatt York)

Woods is joined by former tennis star Caroline Wozniacki and her husband, David Lee, a two-time NBA All-Star when he played for the Golden State Warriors.

Woods, a 15-time major champion with a record-tying 82 wins on the PGA Tour, badly injured his right leg and ankle in a car crash last February outside Los Angeles. He played in the PNC Championship with his 12-year-old son in December but has not said when he can return to the PGA Tour.

One regret PGA Tour Commissioner Jay Monahan has about the Player Impact Program is when he said at the Tour Championship that the results will not be made public.

“I didn’t handle that well when asked the question,” he said.

Monahan said once the results of the PIP are finalized — Phil Mickelson already announced on Twitter that he won the $8 million top prize — they will be known.

“We’re going to release it to the players, and therefore it will be released publicly,” he said with a smile.

The PGA Tour player of the year vote has never been publicized even to the players. For years, the tour has announced only who was on the ballot and who won, and there have been some years when the margin likely was close, such as Tiger Woods over Vijay Singh in 2003 and Patrick Cantlay over Jon Rahm last year.

Monahan said he is considering releasing vote totals this year. If that’s the case, it would also indicate voter turnout.

Two of the top four players in the world are on the 16-member Player Advisory Council, which consults with the PGA Tour board and the commissioner on various issues.

Jon Rahm (No. 1) has served before, while Patrick Cantlay (No. 4) is on the PAC for the first time.

Cantlay, Webb Simpson, Billy Horschel and Peter Malnati are now on a ballot to determine which two should be co-chairs of the PAC, and then move up to become player-directors on the PGA Tour board for a three-year term starting in 2023.

The election ends Feb. 14, the Monday after the Phoenix Open.

Asked why he agreed to be on the ballot, Cantlay said, “I hope to be playing the PGA Tour for a long time, and if I have a chance to make it better, I probably should.”

The player who finished third in the Singapore International on the Asian Tour was five years younger than the winner, not extraordinary except the winner, Joohyung Kim, was only 19.

Ratchanon Chantananuwat, the 14-year-old Thai amateur, made a strong run and had the lead at one point in the final round. A double bogey on the 17th hole gave him a 69 and left him two shots out of the playoff.

Chantananuwat twice made the cut on the Asian Tour when it resumed late last year, including a tie for 15th. With a third-place finish in Singapore — the teen's first time playing outside Thailand — he becomes the youngest player to crack the top 500 in the world ranking.

The previous record belonged to Ryo Ishikawa, who won the first professional event he played at the Munsingwear Open KSB Cup on the Japan Golf Tour at 15 years, eight months. He started his OWGR record at No. 397.

The Cazoo Classic on the European Tour will be played this year at Hillside Golf Club, the links course adjacent to Royal Birkdale. ... Cameron Smith of Australia reached No. 10 in the world for the first time by winning at Kapalua. He lasted only one week, bumped out by Hideki Matsuyama winning the Sony Open. ... The Sony Open was the second time Hideki Matsuyama played a bogey-free weekend to win. He also did that at the WGC-HSBC Champions in Shanghai in 2016.

The 14 times Rory McIlroy has started a new year as a pro, he has been runner-up five times and finished third five times. He has only finished out of the top five on two occasions — a tie for 11th in 2008 and a missed cut in 2013, both in Abu Dhabi. He starts this week in Abu Dhabi.

“Every week you have a chance to do something great." — Matt Kuchar.