At this time two years ago, Emma Raducanu was participating in the Australian Open junior event — and losing in the first round.

A year ago, she was keeping tabs on Melbourne Park via TV, holed up at home in England, a teenager taking a break from the tour while studying for high school exams. 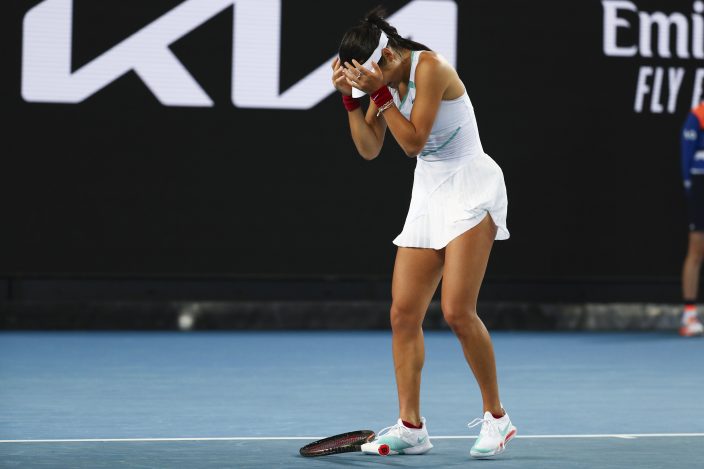 Emma Raducanu of Britain reacts after defeating Sloane Stephens of the U.S. during their first round match at the Australian Open tennis championships in Melbourne, Australia, Tuesday, Jan. 18, 2022. (AP PhotoTertius Pickard)

Everything has come dizzyingly quickly for someone who went from the qualifying rounds to the trophy at the U.S. Open four months ago, and yet she views herself as a work-in-progress who needs to keep building her game. If those on the outside are impatient and have outsized expectations, Raducanu sounds as if she understands the importance of taking things step by step.

“I think 2022 is all about learning for me,” she said after beating 2017 U.S. Open champion Sloane Stephens 6-0, 2-6, 6-1 in the Australian Open's first round. “Being in those situations of, you know, winning a set and then having to fight in a decider is definitely all just accumulating into a bank of experience that I can tap into later on down the line.”

Remember: She had never even won a tour-level match before getting to the fourth round at Wimbledon in July. Then, at New York in September, Raducanu became the first qualifier to win a major championship and, at 18, the youngest female champ at a Slam since Maria Sharapova. 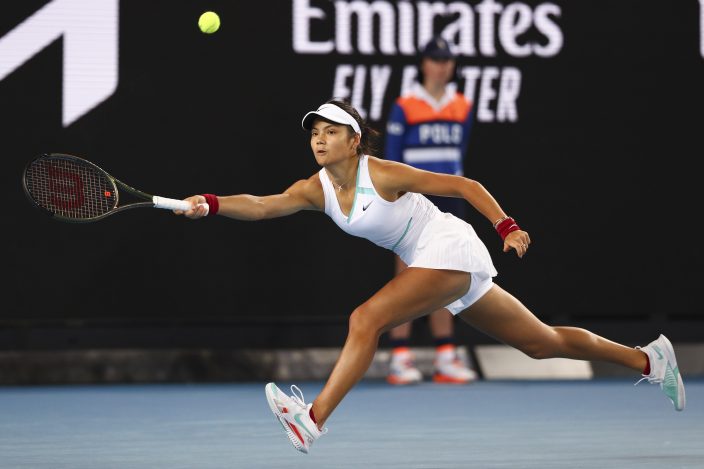 Emma Raducanu of Britain plays a forehand return to Sloane Stephens of the U.S. during their first round match at the Australian Open tennis championships in Melbourne, Australia, Tuesday, Jan. 18, 2022. (AP PhotoTertius Pickard)

The player Raducanu beat in the U.S. Open final, Canada's Leylah Fernandez, also was a teenager, also was unheralded. On Tuesday, Fernandez also was in action; she lost 6-4, 6-2 to Maddison Inglis, an Australian wild-card recipient ranked 133rd.

Like Raducanu, Fernandez did not place too much stock in one outcome.

“One of those days," Fernandez said. "Now it’s just: Get back on the practice court, get ready for the next tournament and the next match and see how it goes (at) the next Grand Slam.” 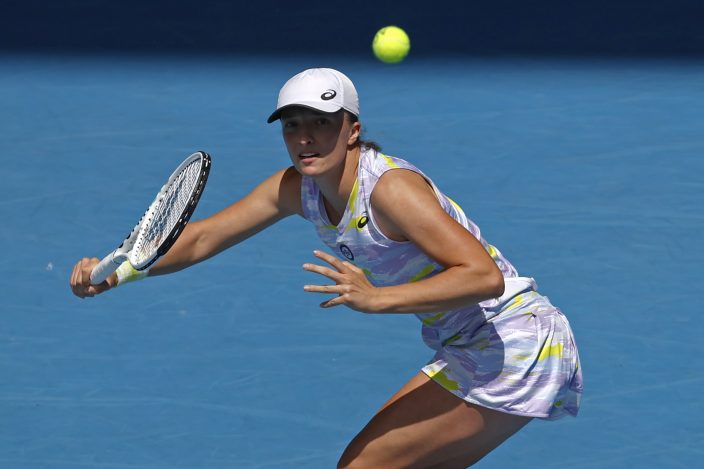 Iga Swiatek of Poland plays a forehand return to Harriet Dart of Britain during their first round match at the Australian Open tennis championships in Melbourne, Australia, Tuesday, Jan. 18, 2022. (AP PhotoHamish Blair)

That sort of level-headed thinking is vital.

“I was talking to someone in the locker room, and I’m like, ‘We’ll be here when she comes down’ — not Emma, but just in general,” Stephens said. “It all is like a cycle, and I think learning how to deal with it early on is the best way to handle it, just because there’s always a lot of ups and downs in tennis.”

Maybe that’s why some folks were surprised or, worse, worried when Raducanu was beaten 6-0, 6-1 at the Sydney International a week ago.

The takeaway should not have been concern. It should have been: So what?

That basically was Raducanu’s take, and she won 24 of 28 points in a 17-minute opening set Tuesday. Even more impressive was the way Raducanu put the second set behind her and dominated the third.

When it ended, Raducanu dropped her racket, doubled over and yanked at the brim of her visor with both hands. Stephens said the result was no big deal — the No. 17 seed defeating a foe ranked 67th — but Raducanu noted she’d never before won a match in this tournament.

So, yes, she should be excited. And, no, she was not going to dwell on that achievement.

“I’m just looking forward to building on this, going forward, trying to recover as best as I can for my next match,” said Raducanu, who split with her coach shortly after the U.S. Open and is now with Torben Beltz, former coach of three-time major champion Angelique Kerber.

He should be well-suited to navigating a Slam champion’s on-court and off-court journey.

Iga Swiatek can relate to where Raducanu is nowadays. Swiatek was 19 when she won the 2020 French Open for her first tour title.

“I’m not going to say that I wasn’t overwhelmed, because I was, for sure,” Swiatek said. “But having good people around me — like, trusting them that they’re going to lead me and guide me in a good way — that was really helpful.”

When she lost early in a 2021 warmup event, Swiatek spent the next five days bothered by this: “Hey, maybe it’s not working out. I’m thinking about the French Open. I’m having huge expectations.”

But when the Australian Open started, Swiatek said, “I came back to normal.”

She got to the fourth round — and made it at least that far at every Slam since, plus reached the Top 10.

That sort of steadiness of mind, more than of game, is what Raducanu and Fernandez should aspire to. They appear to be on that path.

Howard Fendrich covers tennis for The Associated Press. Follow him at https://twitter.com/HowardFendrich or write to him at hfendrich@ap.org