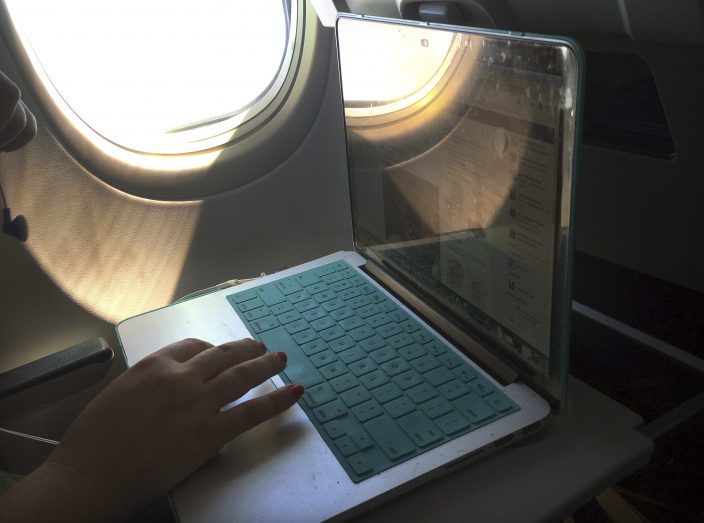 FILE - A passenger uses a laptop aboard a commercial airline flight from Boston to Atlanta on July 1, 2017. The airline industry is raising the stakes in a showdown with AT&T and Verizon over the telecom companies’ plan to launch new 5G wireless service this week, warning that thousands of flights could be grounded or delayed if the rollout takes place near major airports. CEOs of the nation’s largest airlines said Monday, Jan. 18, 2022, that interference from the wireless service on a key instrument on planes is worse than they originally thought. (AP PhotoBill Sikes, File)

5G-AIRLINES — Airlines across the world, including the long-haul carrier Emirates, rush to cancel or change flights heading into the U.S. over an ongoing dispute about the rollout of 5G mobile phone technology near American airports. By Jon Gambrell. SENT: 750 words, photo.

BIDEN — One year into a presidency defined by lofty ambitions and at-times frustrating shortfalls, President Joe Biden will try to talk anxious Americans through the challenges of delivering on his lengthy to-do list as he holds a rare news conference and asks for patience with the pace of progress. By Zeke Miller. SENT: 990 words, photos. UPCOMING: 1,100 words after 4 p.m. news conference. With BIDEN-ONE YEAR-PROMISES — Tracking Biden’s first-year progress delivering on promises.

UNITED STATES-UKRAINE — U.S. Secretary of State Antony Blinken will meet with his Russian counterpart in Switzerland this week as tensions between the U.S. and Russia escalate over a possible Russian invasion of Ukraine, the State Department says. By Diplomatic Writer Matthew Lee. SENT: 960 words, photos. With UNITED STATES-EUROPE-SANCTIONS — U.S., allies pledge unity on Russia; to do what isn’t as clear.

TONGA-VOLCANO-ERUPTION — Three of Tonga’s smaller islands suffered serious damage from tsunami waves, officials and the Red Cross say, as a wider picture begins to emerge of the destruction caused by the eruption of an undersea volcano near the Pacific archipelago nation. By Moussa Moussa and David Rising. SENT: 700 words, photos. With TONGA-VOLCANO-ERUPTION-EXPLAINER Why Tonga eruption was so big and what’s next.

CALIFORNIA WATER-STOPPING WASTE — In a wealthy enclave along the Santa Monica Mountains that is a haven for celebrities, residents are now facing more aggressive consequences for wasting water. By Kathleen Ronayne. SENT: 1,030 words, photos.

VIRUS OUTBREAK-JAPAN — The Japanese government will place Tokyo and a dozen other areas under new restrictions for COVID-19 effective Friday, allowing local leaders to shorten hours for eateries, as a surge in omicron cases threatens to paralyze society. SENT: 490 words, photo.

CAPITOL RIOT-INVESTIGATION — The House committee investigating the U.S. Capitol insurrection subpoenas Rudy Giuliani and other members of Trump’s legal team who filed bogus legal challenges to the 2020 election that fueled the lie that race had been stolen from the former president. SENT: 1,180 words, photos.

CONGRESS-VOTING BILLS — Voting legislation that Democrats and civil rights leaders say is vital for protecting democracy appears headed for defeat in the Senate, a devastating setback enabled by Biden’s own party as two holdout senators refuse to support rule changes to overcome a Republican filibuster. By Congressional Correspondent Lisa Mascaro. SENT: 1,020 words, photos, video. With CONGRESS-FILIBUSTER-EXPLAINER — How the filibuster works and why it matters.

TEXAS SYNAGOGUE-STANDOFF — The gunman who took four people hostage at a Texas synagogue in a 10-hour standoff that ended in his death was checked against law enforcement databases before entering the U.S. but raised no red flags, the White House says. SENT: 790 words, photos, videos.

CALIFORNIA BAR SHOOTING — Video from cameras worn by deputies who responded to a mass shooting at a Southern California bar in 2018 and recordings of calls for help captured the chaos, horror and confusion of the massacre that left a dozen people dead. SENT: 830 words, photos.

FAMILY’S FIGHT-LEBANON — A Lebanese American man’s survivors, who filed an ambitious lawsuit last year alleging Lebanon’s security agency kidnapped and tortured him before he died in the U.S., hope to find an opening after the agency recently responded in an American court. SENT: 1,180 words, photos.

TURKEY ECONOMY-EXPLAINER — Turkey’s government and central bank have in recent weeks taken a series of unconventional steps to prop up the beleaguered economy instead of simply ending a much-criticized plan to cut interest rates, which has weakened the Turkish lira, driven prices higher and severely eroded people’s purchasing power. SENT: 960 words, photos.

AFGHANISTAN-JOBS LOST — More than a half million people in Afghanistan have lost their jobs since the Taliban takeover in mid-August, the International Labor Organization says. By Business Writer Elaine Kurtenbach. SENT: 540 words, photo.