New German Chancellor Olaf Scholz called Wednesday for a “paradigm shift” in the way the world approaches climate policy, saying his country would leverage its presidency of the Group of Seven industrial nations this year to push for standards to fight global warming.

Discussions on energy use and ways to fight climate change have been a key theme this week at the World Economic Forum’s virtual meeting known as the “Davos Agenda” — a reference to the group's annual in-person meeting in the Swiss ski town of Davos that has been delayed because of the COVID-19 pandemic.

Unlike an event like the U.N. climate conference last year in Glasgow, Scotland, the Davos gathering is more of a discussion about big ideas — not a place where concrete agreements are made on how to act, something that has drawn criticism. 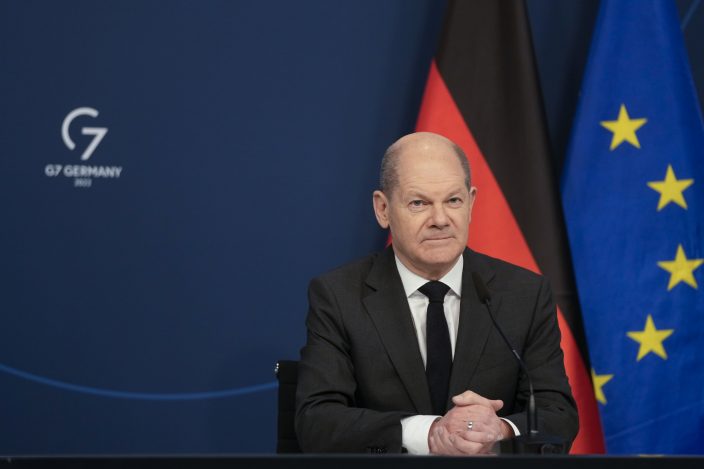 German Chancellor Olaf Scholz sits in front of a camera prior to his speech for the Davos Agenda 2022, at the chancellery in Berlin, Germany, Wednesday, Jan. 19, 2022. The Davos Agenda, which takes place from Jan. 17 to Jan. 21, 2022, is an online edition of the annual Davos meeting of the World Economy Forum due to the coronavirus pandemic. (AP PhotoMarkus Schreiber, Pool)

Scholz spoke Wednesday about issues like economic growth and Russia's military buildup along the Ukrainian border, while focusing on Germany's and the wider European Union's ambitions to fight climate change.

“Europe has decided to become the first carbon-neutral continent by 2050; Germany wants to reach that goal in 2045 already … a monumental task, but a task that we can and will master,” he said. “We will prove wrong those who are currently portraying our continent as a billiard ball in a great geo-economical game between China and the United States.”

He said Germany will use its G-7 presidency to “turn that group into the nucleus of an international climate club." 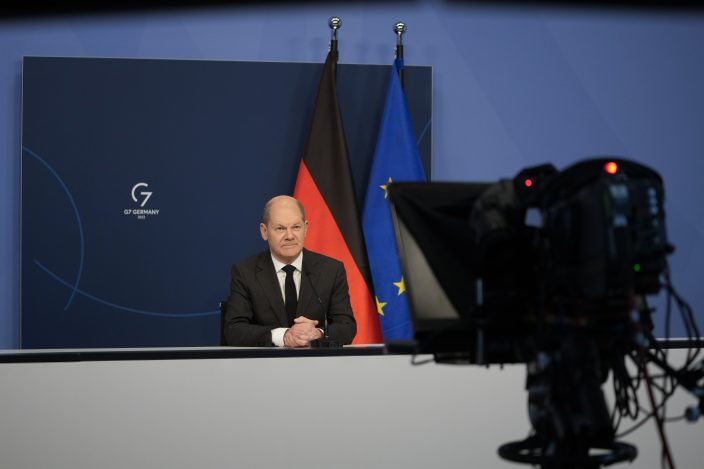 German Chancellor Olaf Scholz sits in front of a camera prior to his speech for the Davos Agenda 2022, at the chancellery in Berlin, Germany, Wednesday, Jan. 19, 2022. The Davos Agenda, which takes place from Jan. 17 to Jan. 21, 2022, is an online edition of the annual Davos meeting of the World Economy Forum due to the coronavirus pandemic. (AP PhotoMarkus Schreiber, Pool)

“What we want to achieve is a paradigm shift in international climate policy. We will no longer wait for the slowest and least ambitious," Scholz said. “Instead, we will lead by example, and we will turn climate action from a cost factor into competitive advantage by agreeing on joint minimum standards.”

Scholz said the “climate club,” which he first announced months ago when he was finance minister, would be open to all countries.

Several groupings of countries have similar goals, including the so-called High Ambition Coalition that’s committed to achieving the strictest target in the Paris accord — limiting global warming to 1.5 degrees Celsius (2.7 Fahrenheit) by the end of the century compared with pre-industrial times. 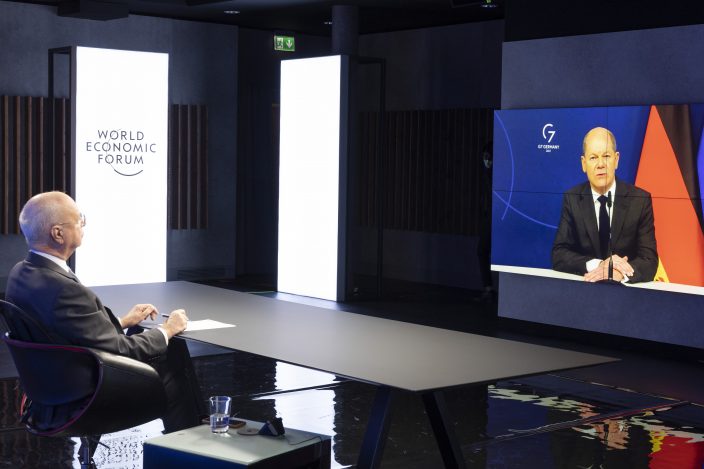 German Klaus Schwab, left, Founder and Executive Chairman of the World Economic Forum (WEF), listens German Chancellor Olaf Scholz displayed in screen, during the Davos Agenda 2022, in Cologny near Geneva, Switzerland, Wednesday, Jan. 19, 2022. The Davos Agenda, from 17 to 21 January 2022, is an online edition due to the coronavirus disease (COVID-19) outbreak gather global leaders to shape the principles, policies and partnerships needed in this challenging context. (Salvatore Di NolfiKeystone via AP)

But critics say such groups often include members with less-than-stellar records on climate. Both Germany and the United States, for example, are not on track to meet their emissions reduction goals and have pushed back against granting poor countries the kind of funding they seek to tackle climate change.

Scholz took office last month with a government that includes the environmentalist Greens. It aims to step up efforts against climate change by expanding the use of renewable energy and bringing Germany’s exit from coal-fired power forward from 2038, “ideally” to 2030.

The forum also was hosting panels on the energy transition and climate innovation with the likes of Bill Gates, John Kerry and Saudi energy minister Prince Abdulaziz bin Salman.