President Joe Biden largely has rallied European allies to pledge as one that they will take tough measures against Russia if it rolls troops into Ukraine. But when it comes to what exactly the United States and Europe are willing to do, the allies haven't looked as united.

Militarily, for example, the United States, Turkey and Britain have stood out for supplying or agreeing to supply anti-tank missiles, armed drones, naval warships and other weapons, along with money to help Ukraine build its defenses. A British military flight taking weapons to Ukraine on Monday flew around German airspace rather than taking the most direct route through it. German officials suggested Wednesday that the issue was their paperwork requirement for such overflights rather than any allied dispute over arming Ukraine.

Biden has warned Russian President Vladimir Putin of economic consequences “like none he's ever seen” if Russia invades Ukraine. But some major European allies have demonstrated less enthusiasm for huge economic penalties, which could damage some European economies or put in jeopardy the Russian natural gas that Europeans need to stay warm this winter. 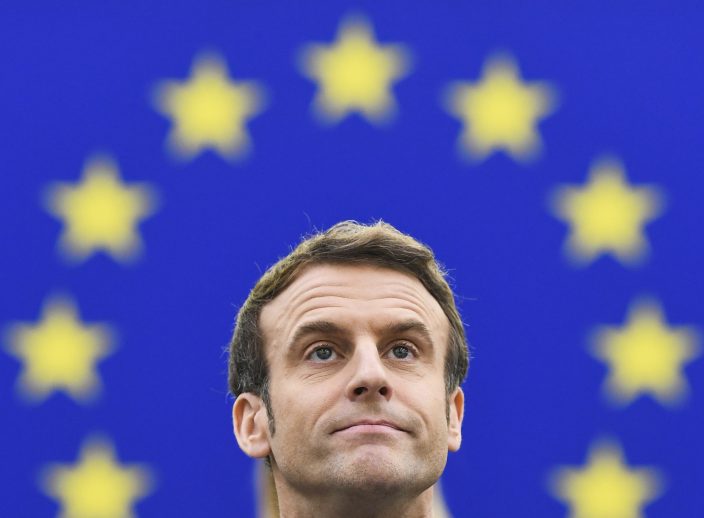 During weeks of intense diplomacy, Russian leaders have dismissed the allies' pledge of a united stand against Russia. In reality, Foreign Minister Sergey Lavrov insisted, it’s the U.S. calling the shots.

If the show of unity and the promises of repercussions have made Putin think twice, he's not showing it.

Russia has sent some 100,000 troops toward the Ukrainian border, and U.S. officials said Tuesday they believed Russia was capable of launching an attack. Secretary of State Antony Blinken was in Kyiv on Wednesday, urging Ukraine and Europe to remain united. 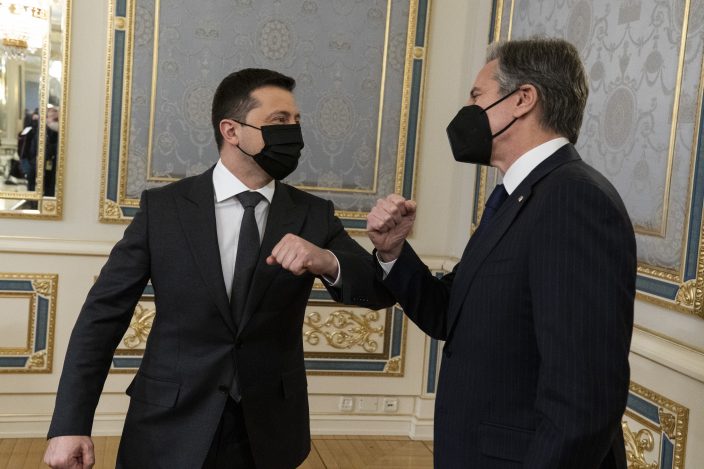 Even so, French President Emmanuel Macron gave one of the first public signals of a potential split. In a speech in Strasbourg, Macron called for a sweeping “European proposal” that would build a new security order on the continent to deal with Russia.

“We will ensure that Europe’s voice is heard," Macron said. France had been an early skeptic of U.S. warnings on Russian moves toward Ukraine, and it was unclear if Macron's call would rally other allies.

Top officials believe Putin has tried to divide the 27-nation bloc, the United States and NATO — which also has 21 EU members — with his security demands.

At least in words, the lining up of Europeans behind U.S. leadership marked a foreign policy success for the Biden administration after it led global allies in a withdrawal from Afghanistan with damaging results.

U.S. work nailing down European commitments against Russia if it invades will continue, said Sen. Chris Murphy, D-Conn., who traveled with other senators to Kyiv to meet with Ukrainian leaders last weekend.

“Right now there seems to be slightly greater interest coming from the United States on implementing tough multilateral sanctions than from Europe,” Murphy told reporters Monday. That's “somewhat stunning to me, given the territorial integrity of Europe, not the United States, is at stake."

In October and November, France, Germany and some others in the EU questioned U.S. warnings that Russia's military buildup near Ukraine could signal an imminent invasion. France and Germany initially opposed activating NATO's crisis response planning system. They relented, and it was activated Nov. 30.

U.S. allies now seem determined to prove they’re in lock-step with Biden. Publicly, there's virtually no dissent from the pledges of tough action.

A Russian invasion of Ukraine would likely trigger the immediate bolstering of defenses of NATO members close to Russia’s borders, such as Estonia, Latvia, Lithuania and Poland. NATO already has about 5,000 troops and equipment deployed in those countries. The presence of NATO members along Russia's borders already is one of Putin's central complaints against the West.

Countries in southeast Europe — Bulgaria, Romania and Turkey, in particular — are also being sounded out about their willingness to potentially host a NATO battle group of about 1,000 troops and equipment in the Black Sea region.

“There is a number of nations that are interested then in hosting those forces,” Adm. Rob Bauer, the head of NATO’s military committee, said last week.

Because it's not a member of NATO, Ukraine can expect no military help from the alliance as an organization if Russia invades.

Among the European Union and individual European governments, the rhetoric matches that from the White House and Americans: Russia would incur enormous costs of an economic and political nature if Putin sent his forces across the border into Ukraine.

No leaders are publicly discussing the precise nature of possible sanctions, saying it would be a mistake to show their hand. The EU has a track record of imposing sanctions on Russia in unison with the U.S., the U.K, Canada and other allies.

The most talked-about actions include banning Russia from the SWIFT banking system that handles the flow of money around the world and imposing sanctions on Putin's family, his military and political circles and Russian banks.

But there are questions about how much economic pain Britain is willing to inflict on London’s financial district and property market, which are hubs for Russian money. U.K. banks and financial authorities have long been accused of turning a blind eye to ill-gotten gains.

After France emerged as one of the initial skeptics of the U.S. warnings over Russia's troop buildup, the government minister for European affairs, Clément Beaune, recently said France is ready to support sanctions against Russia if needed. He did not elaborate.

Germany, the largest economy in Europe, holds one of the greatest pieces of economic leverage over Russia — a newly built pipeline, Nord Stream 2, that would deliver Russian natural gas directly to Germany and beyond.

Germany’s foreign minister, Annalena Baerbock, said Monday that her country “will do everything to guarantee the security of Ukraine.”

“Any further escalation would carry a high price for the Russian regime — economic, political and strategic,” she said. “And we’re very serious about this.”

But Germany's government has given mixed signals, and no definitive public word, on whether it would keep the pipeline offline if Russia sends troops into Ukraine. That's left Blinken to give assurances in Germany's stead, saying “it would be difficult to see” gas flowing if Russia invades.