When we last we saw George MacKay running, he was sprinting full-tilt across a World War I battlefield. In “1917,” the British actor played a soldier tasked with delivering a message that a soon-to-be-launched offensive is doomed to fail.

In “Munich — Edge of War," the year is 1938 and the setting is London, then Munich. But MacKay is again bearing urgent communications that sometimes cause him to race down city streets — like to hand the Prime Minister Neville Chamberlain (Jeremy Irons) news of Germany's latest actions against Czechoslovakia.

We're not yet immersed in the helter-skelter of war, as in “1917,” but are poised in its prelude. As Hugh Legat, MacKay plays a recent Oxford grad and Chamberlain's private secretary. Around London, Legat eyes the ominous signs of a gathering storm — a barrage balloon draped over a building — while witnessing the intimate workings of a prime minister maneuvering to keep Hitler in check. Time has moved forward two decades, but MacKay is again a bit player in a grand drama, desperate to prevent an inevitable catastrophe. 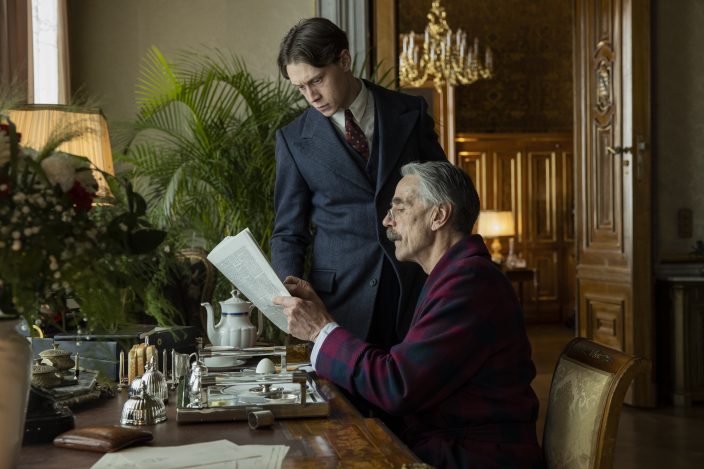 This image released by Netflix shows George MacKay as Hugh Legat, and Jeremy Irons as Neville Chamberlain in a scene from "Munich: The Edge of War." (Frederic BatierNetflix via AP)

The film, which debuts Friday on Netflix, is directed by Christian Schwochow and adapted from Robert Harris’ 2017 book. Harris' historical novel was premised on fact but invented a handful of characters that swirl around both Chamberlain and Hitler. Legat is one such invention, as his his college pal, Paul (Jannis Niewöhner), a German now working in his country's foreign ministry, but stealthily trying to sabotage the rise of Hitler (Ulrich Matthes). With handsome period craft, “Munich — Edge of War” makes for a watchable, engrossing historical thriller with fictional characters situated like spies around political leaders at a profoundly tense, and ultimately woefully misjudged, moment in time.

It's a moment often viewed with shame. Hitler is readying to invade the Sudetenland, the majority-German section of west Czechoslovakia. Europe is trying to gauge the full scope of Hitler's ambitions, and praying it doesn't mean another war. If Germany is granted a partition of Czechoslovakia, will that placate him and avert more bloodshed across the Continent? We, of course, know the answer to this question, and knowing the outcome that lies ahead for all the operators of “Munich” naturally robs the movie of some of its drama. It also gives it an affecting poignancy: Striving for peace is worth it, “Munich” suggests, even when it's a doomed cause.

But it's also an odd time to be commemorating the appeasement of fascists. The generally held legacy of the Munich Agreement is that Chamberlain was fatefully wrong when he, upon landing back in Britain after securing a pledge from Hitler, announced “peace in our time” to cheering throngs. The best justification for the Munich Agreement is that it bought time for Britain and others to build up their defenses for the war that would begin outright a year later. But it opened the door for Hitler's conquest. “Munich” would be better grounded — and more timely — if it spent less effort honoring Chamberlain's noble hopes and more time examining why Chamberlain, Britain and Europe weren't more awake to the clear and present danger. 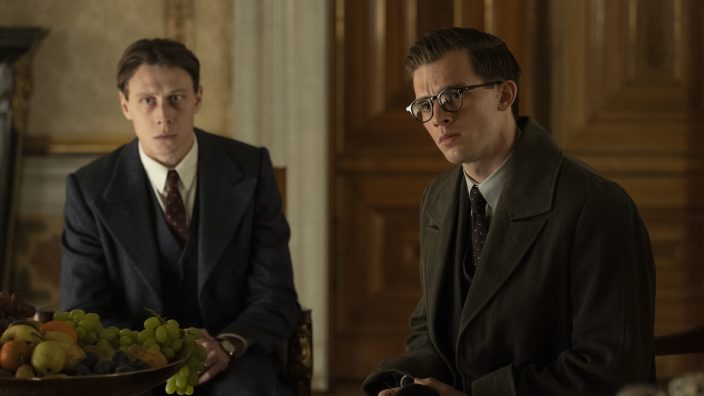 This image released by Netflix shows George MacKay as Hugh Legat, left, and Jannis Niewohner as Paul Hartman in a scene from "Munich: The Edge of War." (Frederic BatierNetflix via AP)

The irony is that the most effective parts of “Munich” are the scenes between Legat and Chamberlain. Things like Legat's family life, Paul's conversion from patriot to radical and Hitler, himself, are thinly and sometimes awkwardly sketched — a shame because Niewöhner is the film's standout. All of the film's women — including Legat's wife (Jessica Brown Findlay), their Jewish college friend (Liv Lisa Fries) and Paul's fellow conspirator (Sandra Hüller, of “Toni Erdmann”) — are underused.

But the sympathetic portrait of the prime minister, drawn from Harris' book, is typically well-played by Irons. And MacKay's alertness keeps “Munich” on edge. There's a tender thoughtfulness to their conversations about holding to principles in the face of totalitarianism. Sure, a cheer for gentlemanly honor. But like Chamberlain, “Munich” misses the moment.

“Munich — The Edge of War,” a Netflix release, is rated PG-13 by the Motion Picture Association of America for some strong language, thematic elements, smoking and brief violence. Running time: 131 minutes. Two stars out of four. 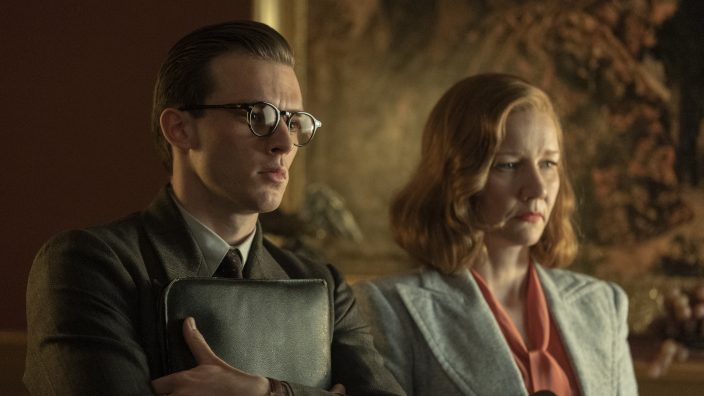 This image released by Netflix shows Jannis Niewohner as Paul Hartman, Sandra Huller as Helen Winter in a scene from "Munich: The Edge of War." (Frederic BatierNetflix via AP) 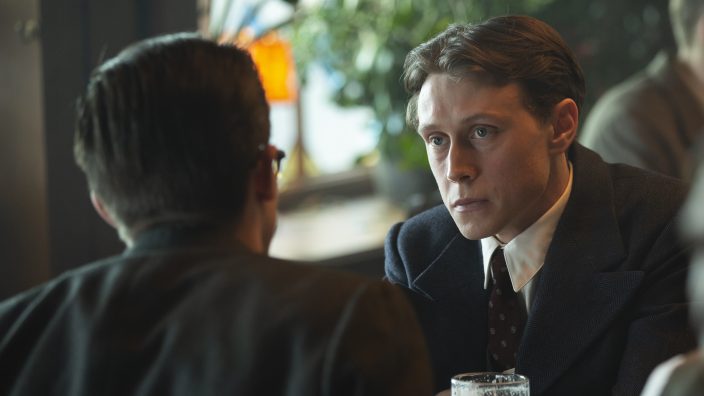 This image released by Netflix shows George MacKay as Hugh Legat, left, and Jannis Niewohner as Paul Hartman in a scene from "Munich: The Edge of War." (Frederic BatierNetflix via AP) 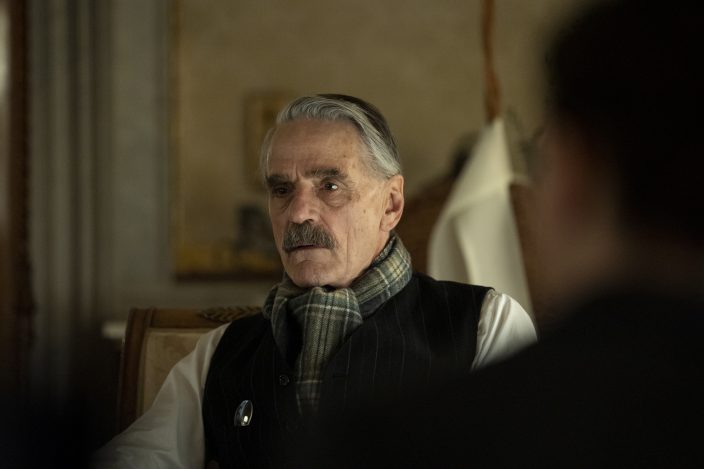 This image released by Netflix shows Jeremy Irons as Neville Chamberlain in a scene from "Munich: The Edge of War." (Frederic BatierNetflix via AP) 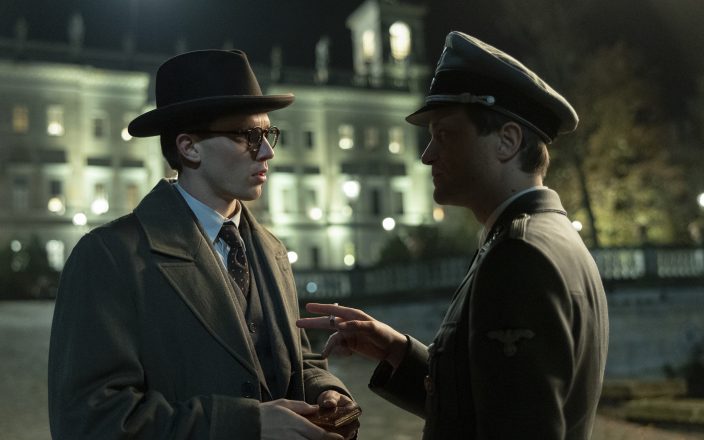 This image released by Netflix shows Jannis Niewohner as Paul Hartman, left, and August Diehl as Franz Sauer in a scene from "Munich: The Edge of War." (Frederic BatierNetflix via AP)