For the first half of one of his rare news conferences as president, Joe Biden stuck to an organized plan, calling on reporters from a list in a binder.

Then the president went rogue.

It started when CNN's Jeff Zeleny broke in with a question that referenced concerns many Americans hold about the competence of government, after the chaotic Afghanistan withdrawal and the recent shortage of testing for COVID-19. 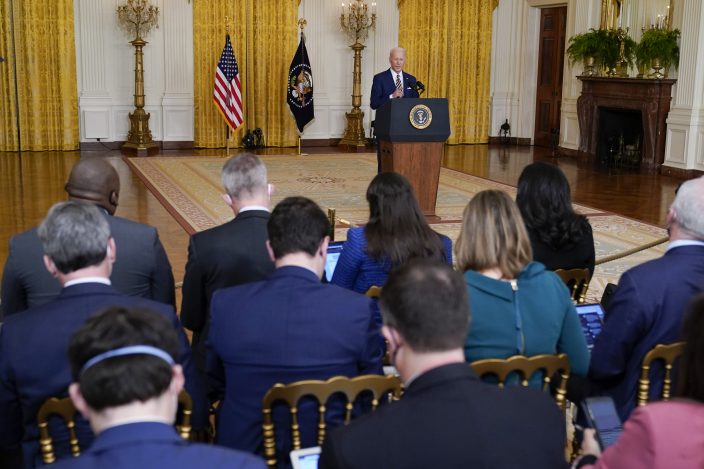 President Joe Biden speaks during a news conference in the East Room of the White House in Washington, Wednesday, Jan. 19, 2022. (AP PhotoSusan Walsh)

Zeleny's question opened the floodgates. Biden took to calling on reporters at random, and what started as a very traditional presidential news conference became something else entirely, stretching to nearly two hours. Biden took some unusual — and unusually blunt — questions when the session was opened up to all the journalists in front of him.

One year into his presidency, Biden has been criticized for holding fewer news conferences than any of his five immediate predecessors after their first years, and participating in fewer one-on-one media interviews.

He engaged in some jousting with Fox News Channel's Peter Doocy, whose network has been relentlessly critical of Biden.

“You always ask me the nicest questions,” Biden said.

Said Doocy, “I have a whole binder full.”

He chuckled when Doocy asked, "Why are you trying so hard in your first year to pull the country so far to the left?

“You guys have been trying to convince me that I'm Bernie Sanders,” Biden said. “I'm not. I like him. I'm not Bernie Sanders. I'm not a socialist. I'm a mainstream Democrat.”

Biden called on James Rosen of the conservative Newsmax network, who asked the president about a poll that found a significant percentage of respondents questioning whether or not he was mentally fit.

“I'll let you all make the judgment whether they're correct or not,” Biden replied sharply. “Next.”

Rosen pressed on, wondering why he thought many Americans have “profound concerns about your cognitive fitness.”

A New York Post reporter asked Biden why he had not asked the Chinese president during a virtual summit in November for more transparency in the hunt to find the origins of COVID-19, and “whether that had anything to do with your son's involvement with an investment firm controlled by Chinese state-controlled interests.”

Biden said that he had brought up the issue of transparency and ignored the question about his son Hunter.

Biden alluded to the criticisms about the infrequency of his meetings with the press, joking with one reporter who had just been assigned to the White House that “we always have long press conferences.”

But for his staff, well aware of Biden's history before the presidency of getting himself in trouble with gaffes, the news conference was a high-wire act the likes of which he hadn't attempted before. It left a lot of news for journalists to unpack, on such matters as his legislative priorities and the confrontation with Russia over Ukraine.

He grew angry at one point when he believed reporters weren't accurately quoting his fiery speech on voting rights, and mused at length about how he is covered on cable news.

Despite the length, there were still questions shouted at the president when he turned and left the podium.