San Francisco 49ers coach Kyle Shanahan is hopeful that star edge rusher Nick Bosa will be cleared to play in a divisional-round playoff game against the Green Bay Packers on Saturday night.

Bosa left last week's wild-card win at Dallas in the first half with a concussion, but has made good progress in his recovery. Bosa returned to practice on a limited basis on Wednesday and then was a full participant on Thursday before the Niners (11-7) left for Green Bay (13-4).

Bosa is listed as questionable for the game and must clear one final step in the protocol before being cleared to play in the game. Shanahan said it's “looking good” that Bosa will be able to play against the Packers. 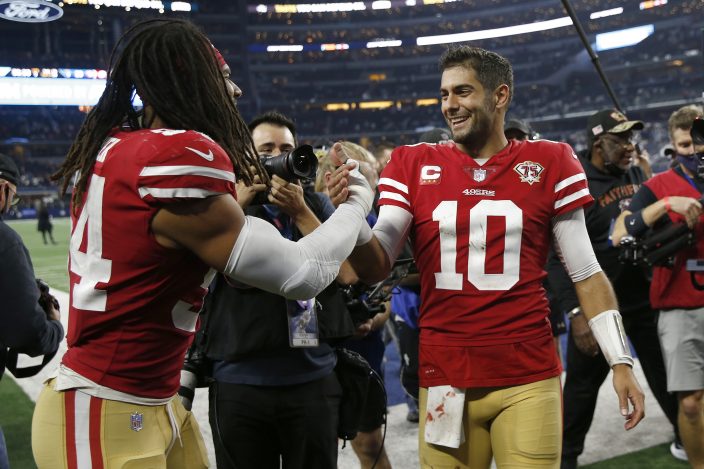 The only other players with injury designations for the game are cornerback Ambry Thomas (knee) and defensive end Jordan Willis (ankle), who are both questionable.

Quarterback Jimmy Garoppolo and linebacker Fred Warner made it through the week of practice with no issues after dealing with injuries last week and are good to go.

Garoppolo sprained his right shoulder in the first half against the Cowboys last week, but remained in the game even though he said the injury impacted his throwing. Garoppolo is also dealing with a sprained right thumb that sidelined him in Week 17.

“I think he threw pretty good in the game,” Shanahan said. “He had two throws off and he threw good all week and I thought he threw good the week before. Everyone’s affected by things right now. I think the thumb bothers him more than the shoulder, which he’s gotten used to here the last few weeks. But it’s a challenge, just like a lot of guys are. It is harder at the quarterback position. A number of guys are in that boat. When Jimmy gets out to game day, he’s going to be alright.”

Warner left the game against the Cowboys with an ankle injury in the second half but has been able to practice this week.