Coming off the excitement of a playoff win, while focused on prepping to interview for the Miami Dolphins’ head coaching vacancy, Bills defensive coordinator Leslie Frazier couldn’t leave his office before sending a congratulatory text to safety Micah Hyde early Sunday morning.

For all the emotions he was juggling, Frazier’s mind kept coming back to Hyde’s leaping over-the-shoulder interception of Mac Jones’ pass intended for Nelson Agholor in the end zone to snuff out the Patriots’ opening drive in Buffalo’s 47-17 wild-card playoff win on Saturday.

“It was hard to see from the sideline what exactly happened or how he made that catch, so when I got in my office and had a chance to watch it and ran it back a few times,” recalled Frazier. “It was just an incredible play by a very, very good player.” 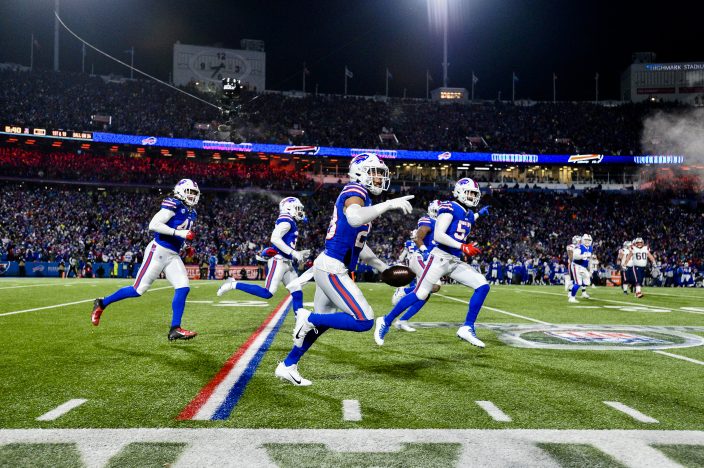 With New England down 7-0 and facing first-and-10 at the Buffalo 34, Hyde was in the middle of the field when Jones saw Agholor bursting past Levi Wallace up the left sideline. Hyde immediately sprinted toward the receiver and snatched the ball away mere inches from Agholor’s fingertips, while making sure to land inbounds before tumbling into the sideline.

Hyde isn’t sure how he got there, saying: “I kind of blacked out.”

Wallace, believing he was beaten, was surprised to see a flash of Hyde’s blue jersey streak past him.

For Frazier, it was a play he has come to expect from his safety tandem rounded out by Jordan Poyer who, along with cornerback Tre’Davious White, have anchored Buffalo’s playmaking secondary over the past five years.

Exceptional as the trio has been over that stretch in combining for 48 interceptions (Poyer has 18, White 16 and Hyde 14), this just might be the safety tandem’s best season with White having missed the final six games with a knee injury.

Poyer, who earned his first All-Pro honors this season, and Hyde, who was tied for third with 10 votes, each finished the season with five interceptions — the NFL’s only safety duo with five or more each — and were part of a defense which allowed the fewest yards, yards passing and points in the NFL.

“They are the backbone of our secondary,” Frazier said. “I don’t know where we’d be without them.”

The two-time AFC East champion Bills are headed to play a divisional playoff game at Kansas City on Sunday in what will be a rematch of last year’s AFC championship game which the Chiefs won 38-24. It'll also be their second meeting this season after Buffalo beat Kansas City 38-20 in Week 5.

While Hyde had one of Buffalo’s two interceptions of Patrick Mahomes in October, he’s aware of the daunting challenge the Bills face against a quarterback who threw five TDs in a 42-21 wild-card win last weekend.

“They do it all,” Hyde said. “These guys can literally score on any single play.”

The secondary has been Buffalo’s strength by allowing just 12 touchdowns passing in 17 games, one short of the 16-game low of 11 set in 1996.

Hyde and Poyer have played together for so long in the same system, they instinctually read off each other while also being adept at disguising their intentions to keep opposing quarterbacks guessing.

What’s no coincidence is how they both landed in Buffalo by agreeing to contracts on the first day of free agency in March 2017.

Hyde, who spent his first four NFL seasons in Green Bay, and Poyer, coming off three-plus seasons in Cleveland, were specifically targeted as players who fit the defensive system being introduced by Frazier and newly hired head coach Sean McDermott. An added bonus was both having leadership potential to oversee a unit being rebuilt with youth.

“Two very fine young men that just handle their business the right way,” McDermott said. “They’re professional in their approach and they can flip the switch when they get on the field.”

Hyde and Poyer’s presence is evident among Buffalo’s offensive players.

“Their juice, their energy, it’s unmatched,” quarterback Josh Allen said. “And obviously, you see the accolades start rolling in for them. In my opinion, they should have been rolling in a lot sooner.”

Both safeties have not hidden their displeasure in being overlooked once the annual awards season arrives. They’ve become masters in using the lack of respect as motivation.

Even upon being honored this season, Poyer said he can always find someone out there who doubts them.

“That’s how we’re wired. We’re always going to carry the underdog mentality with us,” Poyer said. “And I think that’s part of the reason why we’ve become who we’ve become.”

Frazier saw the first glimpse of Hyde and Poyer’s potential in a 23-17 win at Atlanta in Week 4 of the 2017 season in which Hyde had two interceptions. What stood out to Frazier is how opposing offenses began changing their strategy by attempting fewer deep passes.

Hyde’s interception against New England reminded Frazier of that game.

“When he made that play and I watched it again, I said, 'Finally, someone decides to test us with a shot and Micah makes this play,’” Frazier said. “I’m not sure if we’ll see many shots down the field like that again.”