The top diplomats of Russia and the United States are holding crucial talks on Friday as a weeks-long standoff over Ukraine teeters on the cusp of a pivotal and potentially violent phase, with rising concerns that Europe may again be beset by war.

U.S. Secretary of State Antony Blinken and Russian Foreign Minister Sergey Lavrov are meeting in Geneva, once a key Cold War crossroads, trying to avert a possible Russian invasion of Ukraine amid Moscow’s demands for concessions from NATO over its relationship with the former Soviet republic.

Blinken on Thursday played down any prospects of an immediate fix in the Geneva talks, which are set to run about two hours, saying resolving the difficult issues “won’t happen quickly” – and emphasizing that he doesn’t expect a resolution on Friday. 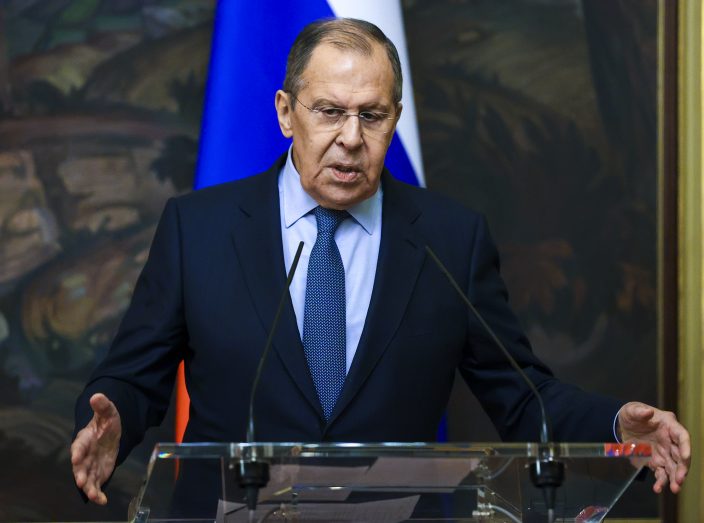 Washington and its allies have repeatedly promised “severe” consequences such as biting economic sanctions — though not military action — against Russia if an invasion goes ahead by 100,000 Russian troops who have been positioned near the Ukrainian border for weeks.

After meeting with Ukraine’s president in Kyiv and top diplomats from Britain, France and Germany in Berlin this week, Blinken was set for a face-to-face with Lavrov that is shaping up as a possible last-ditch effort at dialogue and a negotiated agreement — but both sides sticking to so-far-irreconcilable red lines.

On Thursday in Berlin, Blinken warned of a “swift, severe” response from the U.S. and its allies if an invasion is launched, and the U.S. Treasury Department slapped new sanctions on four Ukrainian officials. Blinken said the four were at the center of a Kremlin effort begun in 2020 to damage Ukraine’s ability to “independently function.” 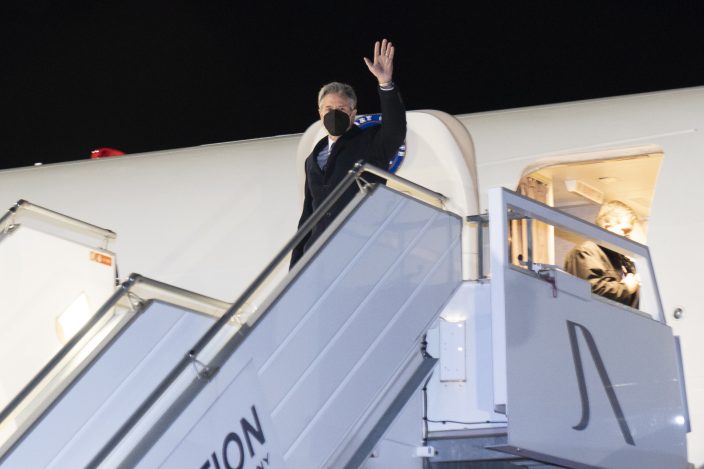 The Russian Foreign Ministry on Thursday laid out its planned agenda for the meeting: texts of two proposals by Moscow for new treaties with both the United States and NATO on security guarantees.

The State Department, meanwhile, put out three statements – two on Russian “disinformation,” including specifically on Ukraine, and another entitled “Taking Action to Expose and Disrupt Russia’s Destabilization Campaign in Ukraine.”

Blinken took pains to stress U.S. unity with its allies in opposition to a possible Russian invasion — and tried to do just that Thursday, a day after U.S. President Joe Biden drew widespread criticism for saying retaliation for Russian aggression in Ukraine would depend on the details and that a “minor incursion” could prompt discord among Western allies. 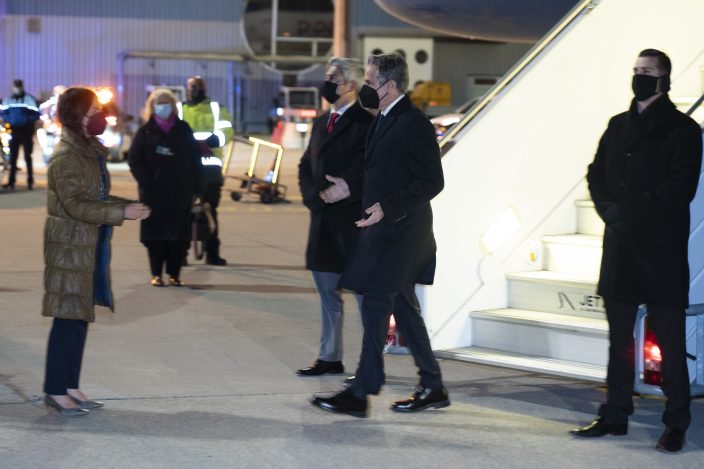 Secretary of State Antony Blinken, second from right, is greeted by Ambassador Bathsheba Crocker, U.S. Representative to the United Nations and Other International Organizations in Geneva, left, as he arrives at Geneva Airport, Thursday, Jan. 20, 2022, in Geneva, Switzerland. (AP PhotoAlex Brandon, Pool)

On Thursday, Biden cautioned that any Russian troop movements across Ukraine’s border would constitute an invasion and that Moscow would “pay a heavy price” for such an action.

“I’ve been absolutely clear with President Putin,” Biden said. “He has no misunderstanding: Any, any assembled Russian units move across the Ukrainian border, that is an invasion.”

Russia has denied it is planning an invasion and instead accused the West on Thursday of plotting “provocations” in Ukraine, citing the delivery of weapons to the country by British military transport planes in recent days.

Russia wants binding security guarantees, including a permanent prohibition on Ukrainian membership in NATO, to which Kyiv aspires, and the removal of most of the U.S. and allied military presence in eastern Europe.

The U.S. and its European partners say they are willing to consider certain less-dramatic gestures but that the Russian demands are out of the question and that Putin knows they are nonstarters.

Talks on Ukraine would pose challenge of their own for Biden

US seeks balance as fears grow Russia may invade Ukraine