Pope Francis pledged Friday to provide justice to victims of clergy sexual abuse, a day after an independent audit faulted his predecessor, Pope Benedict XVI, for having botched four cases of abusive clergy when he was archbishop of Munich, Germany.

Francis met with the members of the Vatican office that handles sex abuse cases in a previously scheduled annual audience. The Congregation for the Doctrine of the Faith was headed by Cardinal Joseph Ratzinger - Benedict before he became pope - for a quarter-century.

In his speech, Francis didn’t refer to the findings of a long-awaited report into how the Munich archdiocese handled abuse cases from 1945 and 2019. Ratzinger was archbishop there from 1977-1982. 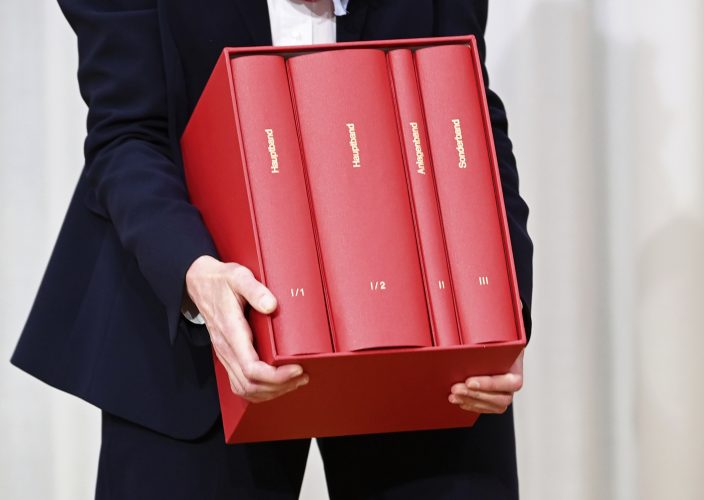 But Francis said the church was continuing to discern the way forward in the abuse scandal, which has discredited the Catholic hierarchy at the Vatican and around the world.

“The church, with God’s help, is carrying out the commitment with firm determination to do justice to the victims of abuse by its members, applying with particular attention and rigor to the canonical legislation envisaged,” Francis told the group.

He recalled he had recently updated the Vatican norms to handle abuse cases to make them more effective. 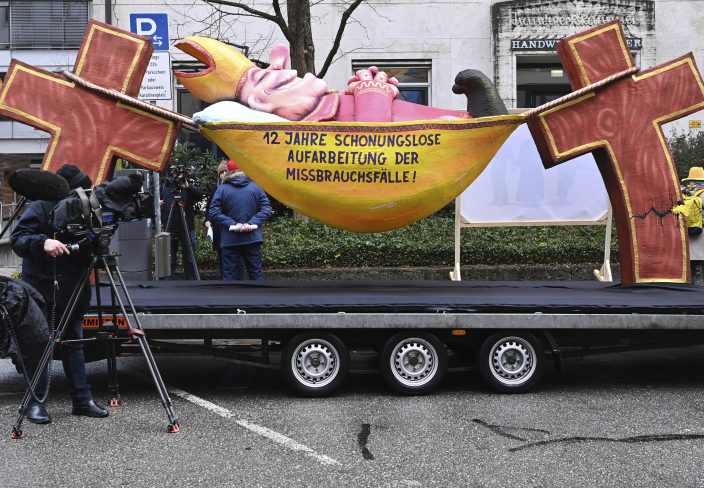 The sculpture The Hammock Bishop of a protest alliance of various organizations stands in front of the House of Bavarian Business, where the expert opinion on cases of sexual abuse in the Catholic Archdiocese of Munich and Freising is presented in Munich, Germany, Thursday, Jan.20, 2022. The diocese of Munich had commissioned the law firm with the expert opinion on the abuse cases. (Sven Hoppedpa via AP, Pool)

“This alone cannot be enough for to stem the phenomenon, but it is a necessary step to restore justice, to repair scandal and reform the offender,” he said.

The German report prepared by an independent law firm found that Ratzinger mishandled four cases of abusive clergy during his tenure as archbishop. Until Thursday, only one known case implicating his Munich tenure had been made public.

One of the report’s authors, Martin Pusch, said the negligence amounted to misconduct. Two of the cases, he said, involved perpetrators who were punished by the German judicial system but kept in church pastoral work without express limits on what they were allowed to do. No action was ordered under canon law.

In a third case, a cleric who had been convicted by a court outside Germany was put into service in the Munich archdiocese, and the circumstances speak for Ratzinger having known of the priest’s previous history, Pusch said.

The fourth case had already emerged publicly in 2010. It involved a pedophile priest whose transfer to Munich to undergo therapy was approved under Ratzinger in 1980. The priest was allowed to resume pastoral work, a decision the church said a lower-ranking official had made without consulting the archbishop. In 1986, the priest received a suspended sentence for molesting a boy.

Another of the report’s authors, Ulrich Wastl, said Benedict’s claim not to have attended a meeting in 1980 in which the priest’s transfer to Munich was discussed lacked credibility.

Prosecutors in Munich said they are examining 42 cases of possible wrongdoing by church officials arising from Thursday’s report. Spokesperson Anne Leiding told German news agency dpa that the cases were referred to them by the law firm that prepared the report last year.

If any suspicion of “possible criminally relevant behavior” emerges from the examination, Leiding said, prosecutors will seek further details from the law firm.

The law firm said on Thursday that the cases involve living officials who are still in office.

The Vatican didn’t immediately comment on the report, saying it would read it carefully in the coming days. Benedict’s longtime secretary, Monsignor Georg Gaenswein, also said the retired pope hadn’t yet read the report but would.

Benedict, who provided information to the report's authors, expressed his upset and shame about the scandal, Gaenswein said.

Benedict’s legacy as pope had already been colored by the clergy abuse scandal globally, even though as a cardinal he was responsible for turning around the Vatican’s approach to the issue.

Ratzinger took the then-revolutionary decision in 2001 to assume responsibility for processing abuse cases after he realized bishops around the world weren’t punishing abusers but were just moving them from parish to parish and enabling them to rape again.

That decision, however, came after Ratzinger was still sitting on cases at the Vatican. Years ago documentation emerged showing that Ratzinger in 1985 dithered on a case of a convicted child molester in California who asked to be defrocked, delaying any action for two years.

The case of the Rev. Stephen Kiesle was evidence that the Vatican under St. John Paul II strongly resisted letting priests leave active ministry, even if they were convicted rapists.

New Vatican law criminalizes abuse of adults, even by laity