In Costa Rica, officials are encouraging those infected with the coronavirus to skip voting in upcoming national elections. On the other side of the world, Beijing is locking down residential communities as the country anxiously awaits the start of the Winter Olympics on Feb. 4.

In Latin America and Asia, where the omicron variant is making its latest appearance, some countries are imposing such restrictions while others are loath to place new limits on populations already exhausted by previous constraints.

Omicron quickly swept through the places it first hit, such as South Africa, the U.K. and the United States, pushing daily cases far higher than at any time during the pandemic. 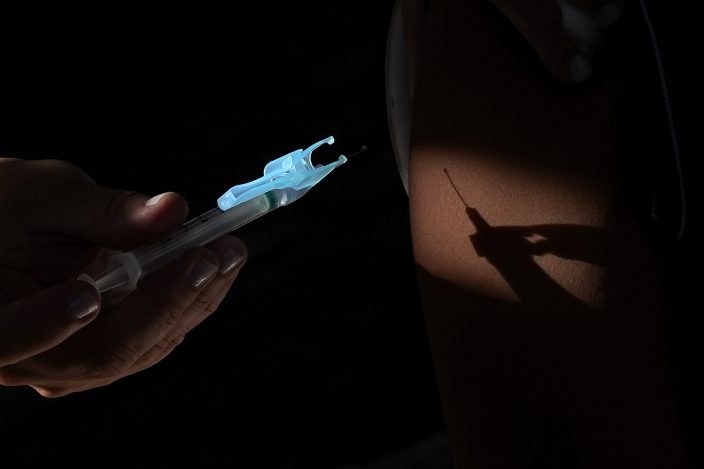 A health worker applies a shot of the Pfizer COVID-19 vaccine at a community health center in Brasilia, Brazil, Sunday, Jan. 16, 2022. Brasilia started the COVID-19 vaccination of children between ages 5 and 11. (AP PhotoEraldo Peres)

The Americas reported nearly 7.2 million new COVID infections and more than 15,000 COVID-related deaths over the past week, the Pan American Health Organization said Wednesday. Coronavirus infections across the Americas almost doubled between Jan. 1 and Jan. 8, from 3.4 million cases to 6.1 million, PAHO said.

Infections are accelerating in Bolivia, Brazil, Colombia and Peru, and hospitalizations are rising in Argentina, Paraguay and Uruguay, said PAHO Director Carissa Etienne. The Caribbean islands are experiencing their steepest increase in COVID-19 cases since the start of the pandemic, Etienne noted.

“Although omicron infections appear to be milder, we continue to urge caution because the virus is spreading more actively than ever before,” Etienne said. 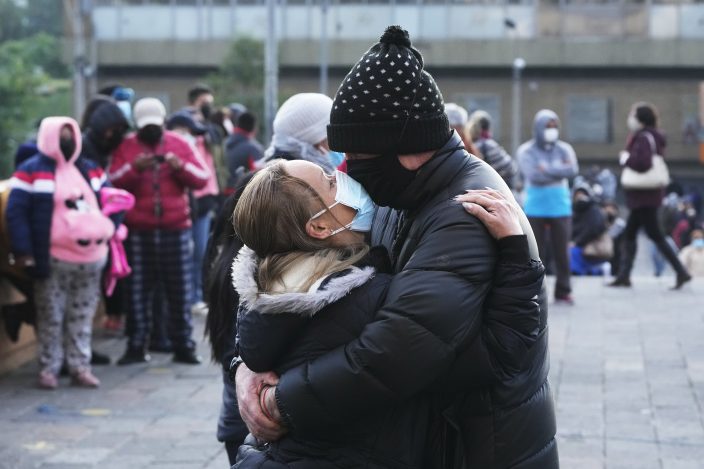 A couple embrace as they wait for a COVID-19 testing center to open, in Quito, Ecuador, Tuesday, Jan. 11, 2022. The provincial government center is offering low-cost COVID PCR tests as an upsurge in infections is feared following the holiday season. (AP PhotoDolores Ochoa)

Infections are also increasing in Asia, including in the Philippines, which has seen its worst coronavirus outbreak in recent weeks.

Countries in both regions are searching for a mix of restrictions that their exhausted populations will accept and that won't inflict undue damage on their economies.

“We’re already going on three years of the pandemic and the population is tired,” said Brazil’s president of the Council of State Health Secretariats, Carlos Lula. “There is no space for many restrictions. We’re going to have to face a third wave with precautions like masking, distancing and vaccination.” 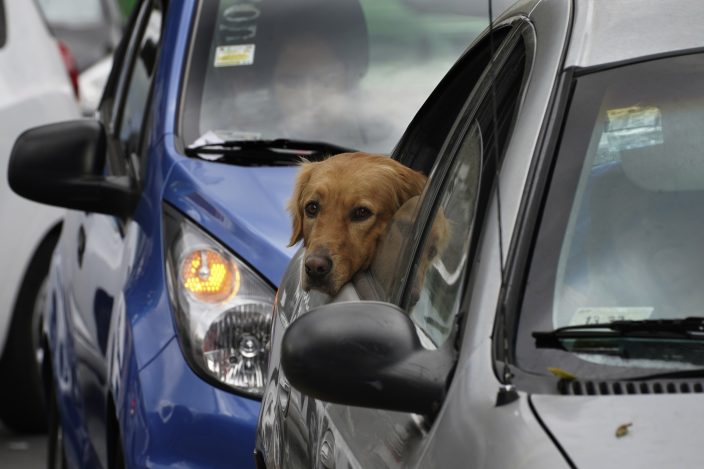 A dog peeks out the rear window of a car as his owner drives in to get tested for COVID-19 in Mexico City, Monday, Jan. 10, 2022. (AP PhotoMarco Ugarte)

Argentina and Mexico also have largely ruled out imposing any national restrictions, instead banking on their vaccination campaigns and the apparently less severe symptoms of the omicron variant.

Mexico President Andrés Manuel López Obrador, having just emerged from a week of isolation after his second coronavirus infection in the past year, downplayed the threat. “It is demonstrable that this variant does not have the same seriousness as the earlier, the delta,” López Obrador said this week.

Antonio Pérez, 67, runs a small stand in a Mexico City market selling notebooks, pens and other school supplies. He was forced to shutter his shop for three months early in the pandemic, rocking him financially. But he agreed with the government’s decision then — a time when little was known about the virus’s spread and no one was vaccinated — and with the hands-off approach now, when most of the population is vaccinated and there is less pressure on hospitals. 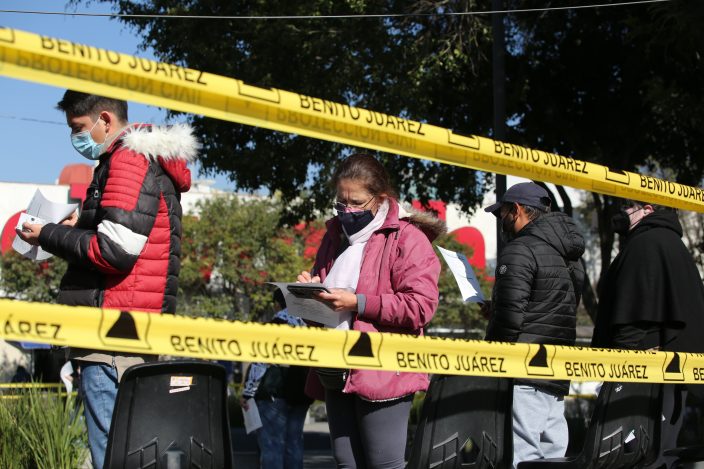 People line up to be tested for COVID-19, in the Benito Juarez borough of Mexico City, Saturday, Jan. 15, 2022. (AP PhotoGinnette Riquelme)

Immunization, masks and social distancing are the way to go now, he said, speaking through his own N95 mask. “I don’t think you can do anything else.”

Some states in Brazil have reimposed restrictions but stopped short of closing down businesses as they did last year. Peru, however, has revived a nationwide curfew, and Ecuador has banned public and private events or large gatherings of any kind.

In Costa Rica, public health concerns are colliding with constitutional guarantees for the Feb. 6 presidential and congressional elections. Authorities concede they can’t stop people from voting, but Eugenia Zamora, president of the Supreme Electoral Tribunal, recently told news outlets that those who test positive for coronavirus should “abstain” from going out to vote. 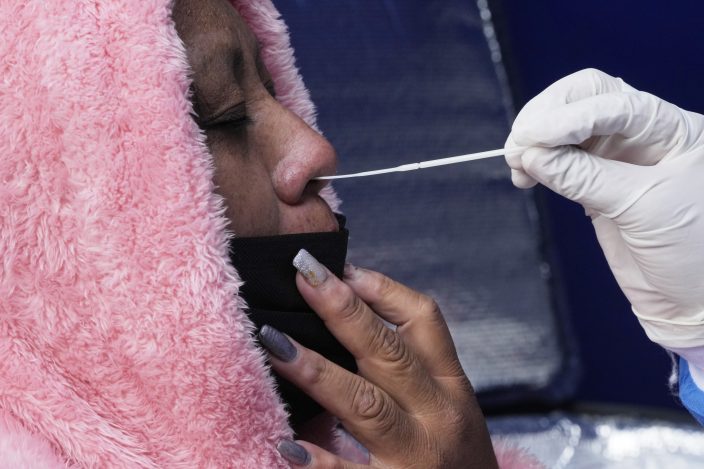 A healthcare worker takes a nasal swab sample from a woman to test for COVID in Quito, Ecuador, Tuesday, Jan. 11, 2022. The provincial government testing center is offering low-cost COVID PCR tests as an upsurge in infections is feared following the holiday season. (AP PhotoDolores Ochoa)

Demographer Luis Rosero said that according to his projections, the new wave of infections could peak right around election day. Under current health protocols, those who test positive in Costa Rica are obligated to isolate.

Costa Rica’s daily confirmed infection totals have risen from fewer than 100 in December to more than 5,000 this month. So far, however, the government has imposed few restrictions, such as requiring soccer clubs to play without fans.

Two other Central American countries, Panama and Honduras, have not imposed any restrictions despite seeing their cases more than double during the past week. 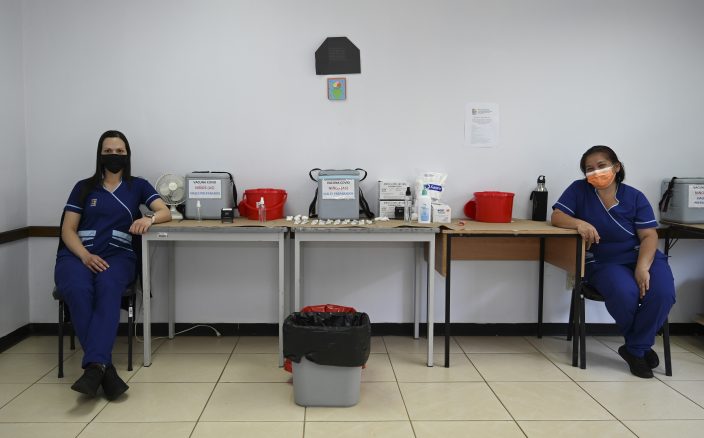 Puerto Rico, among the hardest-hit places in the Caribbean amid the region's current surge, tightened restrictions again this month after the U.S. territory saw its COVID-19 test positivity rate jump from 5% late last year to more than 40% in recent weeks.

Gov. Pedro Pierluisi has required that those working in the health, food, education, tourism and entertainment sectors get their booster shots, as well as public school students age 12 and older. He also reinstated a ban on alcohol sales from 12 a.m. to 5 a.m. and prohibited most businesses from operating during those hours.

In Chile, infections grew 151% in one week, but the only restriction the government has imposed so far is to lower the capacity limit for public spaces. The country has a high vaccination rate, with more than 92% of those 18 and older and 78% of minors having received two doses. The government started offering a fourth dose this month. 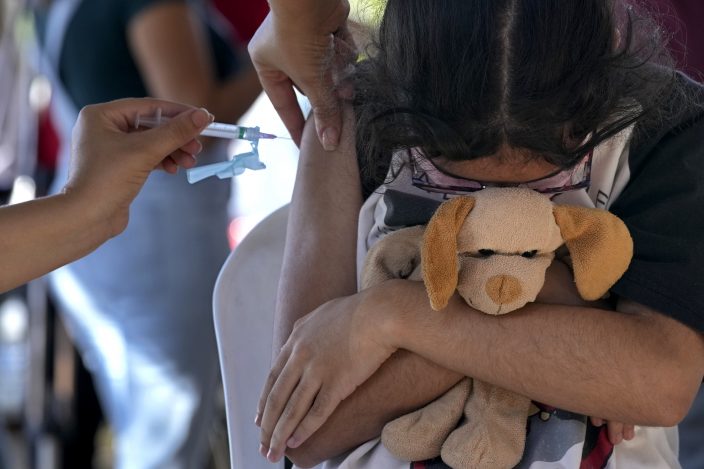 A girl hugs her stuffed toy as she gets a shot of the Pfizer COVID-19 vaccine at a community health center, in Brasilia, Brazil, Sunday, Jan. 16, 2022. Brasilia started the COVID-19 vaccination of children between ages 5 and 11. (AP PhotoEraldo Peres)

Still, in some South American countries, omicron is having a dire effect.

A major hospital in Bolivia’s largest city stopped admitting new patients because of a lack of personnel, and one of Brazil’s most populous states canceled scheduled surgeries for a month. Argentina’s federation of private health care providers estimates about 15% of its workers currently have the virus.

In Asia, South Korea actually eased its restrictions on gatherings slightly this week. But officials have expressed concern about a surge in infections over the Lunar New Year holiday, which begins at the end of the month, when millions of people usually travel across the country to meet relatives. 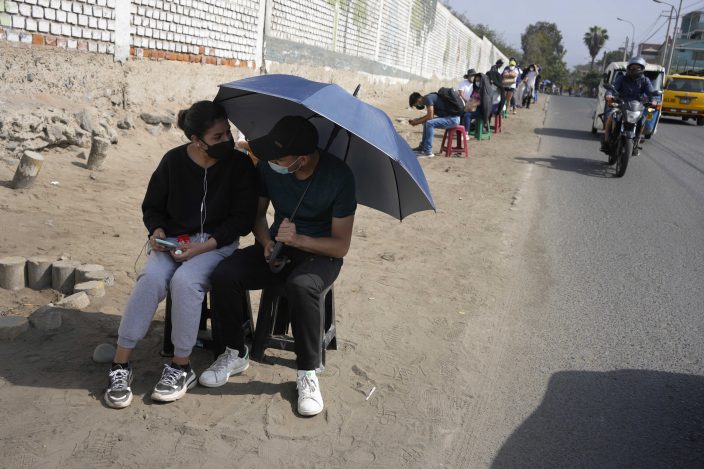 Residents wait to be tested for COVID-19 at a sports complex in the San Juan neighborhood of Lima, Peru, Tuesday, Jan. 11, 2022. Authorities in Peru are confirming a third wave of the pandemic. (AP PhotoMartin Mejia)

In China, Beijing has moved classes online and locked down some office buildings. Japan, meanwhile, is maintaining strict border controls as infections surge, but otherwise doing little more than shortening business hours for restaurants and bars.

Hong Kong authorities have banned indoor dining after 6 p.m. and ordered certain businesses, such as museums and gyms, to close until at least early February. The city is also culling small animals including hamsters and chinchillas and halting their import and sales after several hamsters in a pet shop tested positive for the coronavirus.

In the Philippines, officials this week started banning commuters who have not been fully vaccinated from riding public transportation in greater Manila, a region of more than 13 million people. The move sparked protests from human rights groups. Daily confirmed infections soared from a few hundred last month to more than 30,000 in recent days. 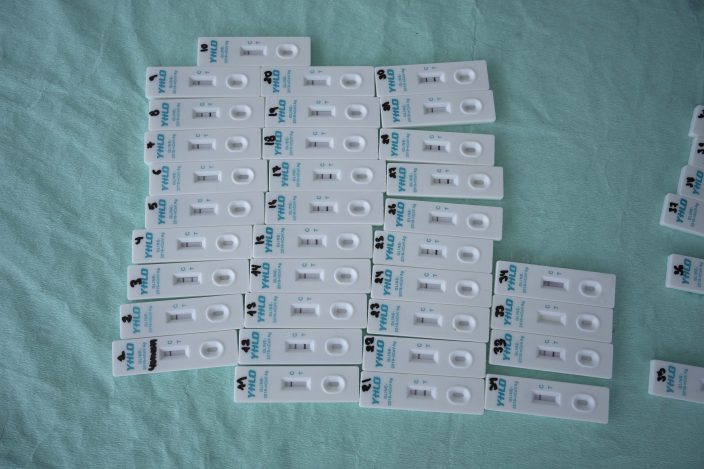 Antigen test cartridges used in diagnosing COVID-19 sit on a table at a sports complex converted into a makeshift testing site, in the San Juan neighborhood of Lima, Peru, Tuesday, Jan. 11, 2022. Authorities in Peru are confirming a third wave of the pandemic. (AP PhotoMartin Mejia)

Roman Catholic Church leaders in the Philippines capital were forced to cancel the Jan. 9 procession of the Black Nazarene, a centuries-old black statue of Jesus Christ, for a second year. Because the event is one of Asia’s biggest religious festivals, drawing millions of mostly barefoot pilgrims, officials feared it could become a superspreader during the omicron surge.

“If you’re vaccinated, you have a fighting chance. If not, we’ll be burying, filling our cemeteries,” Duterte said in televised remarks. 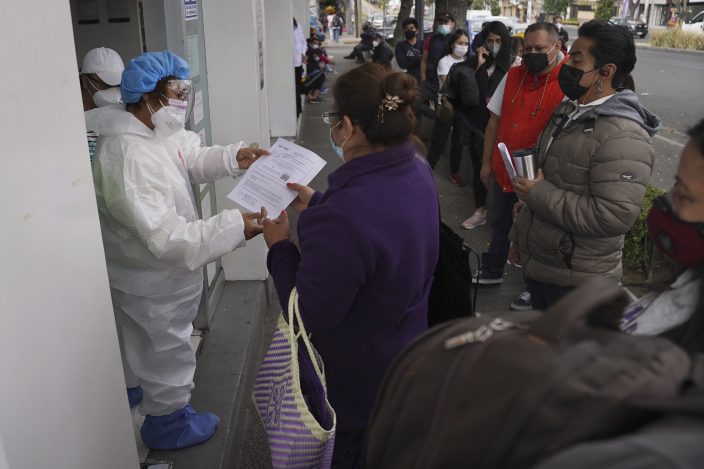 A woman gets her results after getting tested for COVID-19, outside a pharmacy in Mexico City, Monday, Jan. 10, 2022. (AP PhotoMarco Ugarte) 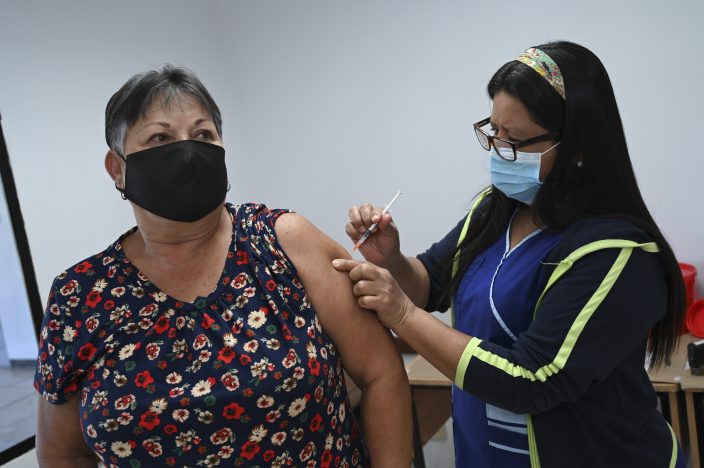 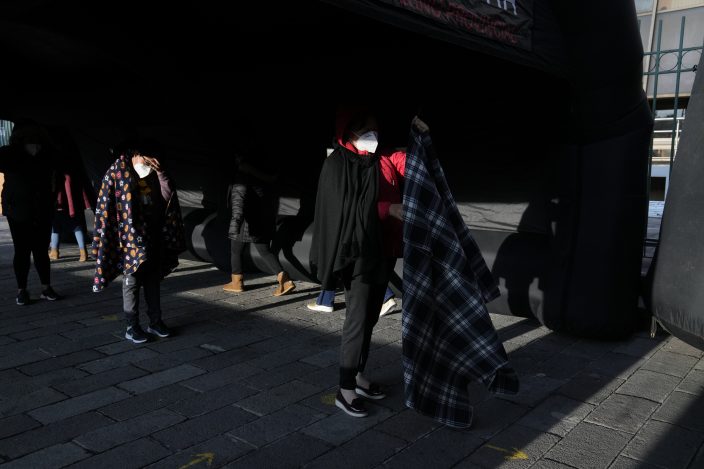 Residents wait to be tested at a COVID testing center in Quito, Ecuador, Tuesday, Jan. 11, 2022. The provincial government center is offering low-cost COVID PCR tests as an upsurge in infections is feared following the holiday season. (AP PhotoDolores Ochoa)