BETTING LINE: Buccaneers by 3, according to FanDuel SportsBook. 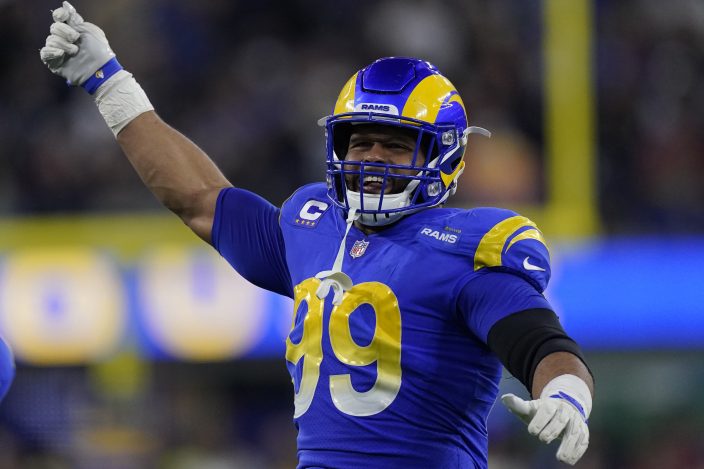 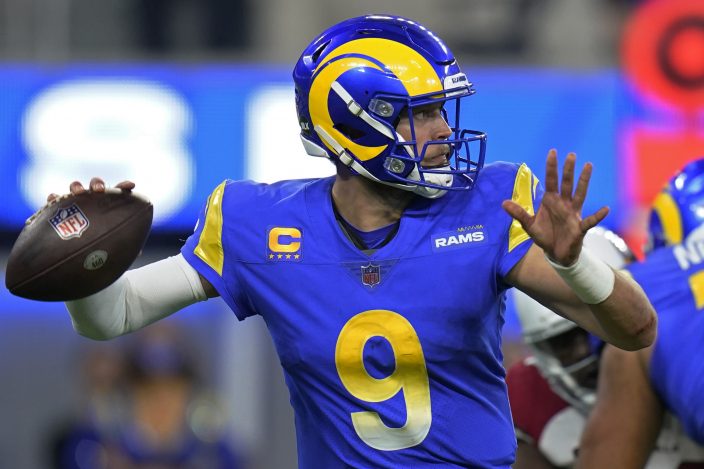 TURNOVER DIFFERENTIAL: Rams plus-2; Buccaneers plus-10

RAMS PLAYER TO WATCH: NFL receiving leader Cooper Kupp had the quietest game in his record-breaking season for the Rams last week against Arizona, matching his season low with five receptions for a season-low 61 yards. The receiving Triple Crown winner still made his 17th touchdown reception of the year, and he freed up the rest of the Rams’ offense as an obvious target of the Cardinals’ defense. Los Angeles is almost certain to need a bigger offensive game this week to keep up with Brady and the Bucs, and Kupp is overdue for a breakout postseason performance after being injured for two of the Rams’ previous three playoff runs of his career, including the 2018-19 Super Bowl surge.

BUCCANEERS PLAYER TO WATCH: With leading receiver Chris Godwin lost to a season-ending knee injury and Antonio Brown no longer with the defending Super Bowl champs after refusing to re-enter a game, WR Mike Evans continues to show why the Bucs were such an attractive destination for Brady in free agency in 2020. Evans is the only player in NFL history to begin a career with eight consecutive 1,000-yard receiving seasons. He had nine catches for 117 yards and a TD in last week’s wild-card victory over Philadelphia. He set a franchise record with 14 TD receptions this season, second in the league behind Kupp. Evans had eight catches for 108 yards in Tampa Bay’s 10-point loss to the Rams during the regular season.

KEY MATCHUP: Brady and a nicked-up offensive line vs. the Rams' pass rush featuring DT Aaron Donald and LB Von Miller. No QB consistently does a better job of getting rid of the football than Brady. Teams that have given the Bucs the most trouble over the past two seasons, including the Rams, have been able to make the seven-time Super Bowl champion uncomfortable in the pocket. He threw for 432 yards but just one TD in the most recent meeting. The Rams sacked him three times.

KEY INJURIES: LT Andrew Whitworth (knee) was injured on the first play of the Rams’ playoff win over the Cardinals. His status is uncertain for Sunday. ... Bucs All-Pro RT Tristan Wirfs (ankle) and Pro Bowl C Ryan Jensen (ankle) were hurt during last week’s win over the Eagles. Wirfs’ status may linger until game time. Backup RT Josh Wells (quadriceps) is on the injury report, too, after being hurt against Philadelphia.

SERIES NOTES: The Rams lead the all-time series 18-9, including both meetings since Brady joined the Bucs last season. It’s the third time the franchises have met in the playoffs, with the previous two matchups coming in low-scoring NFC championship games during the 1979 and 1999 seasons. The Rams won both — prevailing 9-0 on Jan. 6, 1980 in Tampa, and 11-6 with Kurt Warner throwing the winning TD pass to Ricky Proehl with less than five minutes remaining on Jan. 23, 2000 in St. Louis. The Rams took the last two regular-season meetings, 27-24 on the road in 2020, 34-24 at home this season.

STATS AND STUFF: Sean McVay needs one victory to become the winningest postseason coach in the Rams’ modest playoff history. He is currently tied with John Robinson with four postseason wins. ... QB Matthew Stafford got the first playoff victory of his 13-year NFL career last week despite throwing a career-low 17 passes. He set the Rams’ single-season records for yards passing (4,886) and completions (404) in the 17-game campaign. ... RBs Sony Michel and Cam Akers teamed up for 113 yards rushing last week. Akers returned from a torn Achilles tendon in Week 18, putting Los Angeles’ rushing attack in top form. ... Akers is averaging 122.3 yards from scrimmage in his three career playoff games. ... WR Odell Beckham Jr. has six TD receptions in his last eight games. He made his first career playoff TD catch and got his first postseason win last week against Arizona. ... Aaron Donald and Leonard Floyd each sacked Brady in the Rams’ win in September. Seven-time All-Pro Donald has three sacks in seven career playoff games. ... Three-time All-Pro CB Jalen Ramsey hasn’t had a postseason interception in the five ensuing games since his playoff debut with Jacksonville in January 2018. ... If 40-year-old LT Whitworth can’t play or is limited by his ankle and knee injury, fourth-year backup Joseph Noteboom is likely to make his first career playoff start. ... Brady’s long list of career accomplishments includes postseason records for yards passing (12,720), TD passes (85), wins (35) and games played (46). He led the NFL with a career-best 5,316 yards passing this season. He also paced the league in completions (485), attempts (719) and TD passes (43). ... The Bucs have won a franchise-best five straight playoff games. They’ve scored at least 30 points in each of the victories. ... TE Rob Gronkowski scored his 15th postseason TD last week against the Eagles. Hall of Famer Jerry Rice (22) is the only other player with more career playoff TD receptions. ... While the Bucs became the first team to win a Super Bowl played in its home stadium last February, they had to win won three road playoff games to get there. Technically, last week’s wild-card win over the Eagles was the club’s first “home” playoff win since the 2002 season. ... The Bucs are 8-1 at Raymond James Stadium this season.