Aaron Rodgers understands time is running out on his hopes of winning a second Super Bowl title with the Green Bay Packers.

The 38-year-old quarterback’s latest postseason run begins Saturday night as he tries to beat the team that has served as the three-time MVP’s biggest playoff nemesis.

Rodgers owns an 0-3 playoff record against the San Francisco 49ers, though he’s beaten them in the regular season each of the last two years. The top-seeded Packers (13-4) and 49ers (11-7) face off again Saturday night in an NFC divisional playoff game at Lambeau Field. 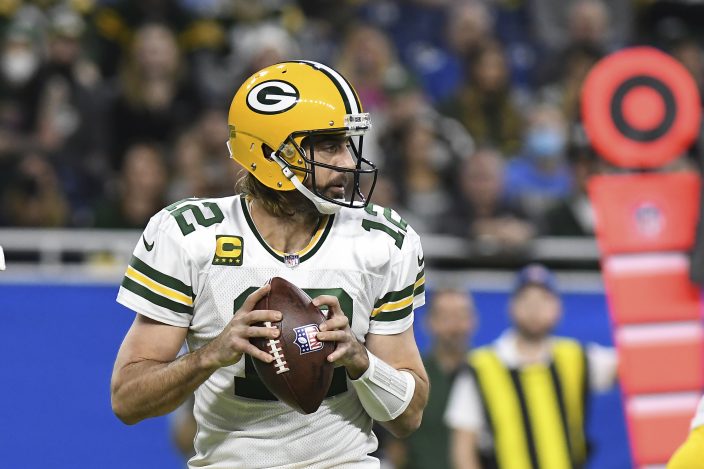 Since stumbling to a 3-5 start, the 49ers have won eight of 10 while showing a knack for delivering away from home. They secured a playoff berth by rallying from a 17-0 deficit to win an overtime road game with the Los Angeles Rams, and followed that with a 23-17 wild-card victory at Dallas. 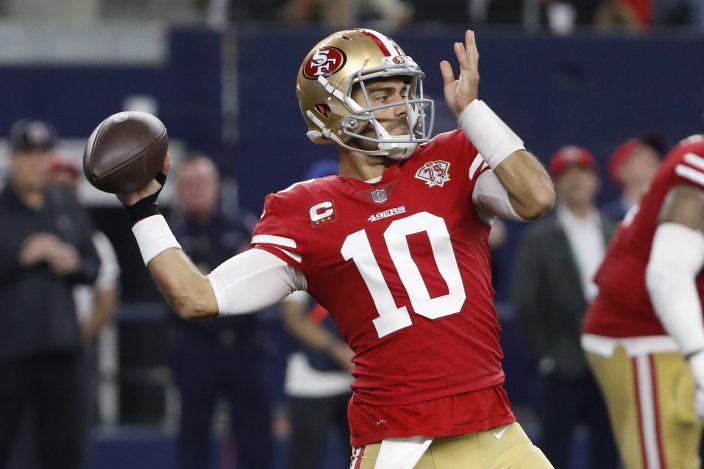 “Putting that pressure on your team early, it creates a mindset,” Garoppolo said. “It creates an atmosphere in the locker room of a sense of urgency that we have to win now and we have to make some plays.”

But the 49ers can lean on their successful postseason history against Rodgers’ Packers, including a 37-20 victory in the NFC championship game two seasons ago. 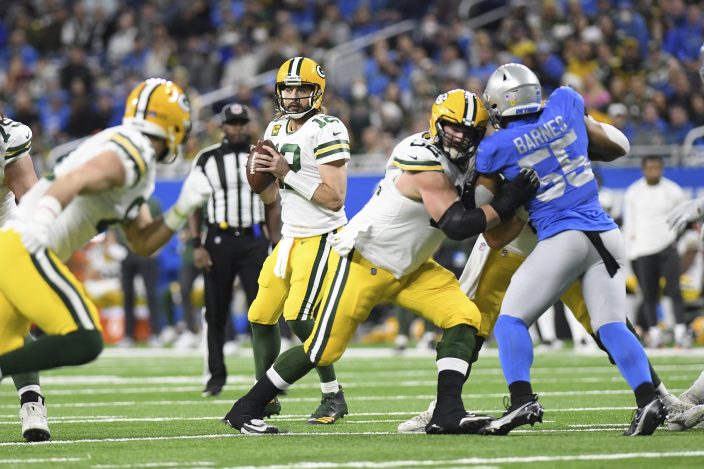 “This is a special opportunity,” Rodgers said. “We’re not going to make it bigger than it is. We’ve gotten this far being level-headed and even-keeled and not rising a roller coaster of emotions and we’re going to keep on doing the same thing. So if it was good enough to get us this far, it’s good enough to get us past this point.”

Deebo Samuel has added another role to his do-everything season. 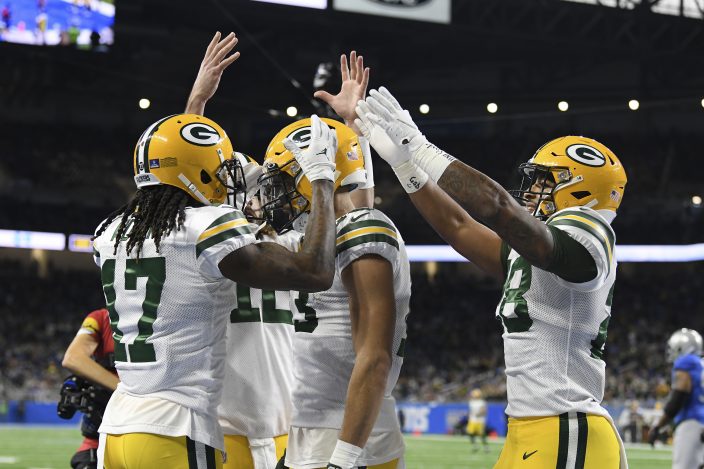 Green Bay Packers wide receiver Allen Lazard (13) is congratulated by teammates after scoring during the first half of an NFL football game against the Detroit Lions, Sunday, Jan. 9, 2022, in Detroit. (AP PhotoLon Horwedel)

The dynamic receiver and runner showed off his prognostication skills last week. After San Francisco intercepted a pass, Samuel told coach Kyle Shanahan to get him the ball and he’d score. Shanahan called for a handoff on the next play, and Samuel took it 26 yards for a TD.

“I’ve been doing this for a long time and I’ve never, ever, ever been around a football player that called his own shot,” 49ers offensive coordinator Mike McDaniel said. “I get in basketball, but when you’re playing with 22 people are on the field, 11 of them are trying to tackle you with every ounce of being that they have. And you just say, ‘Hey yeah, give me the ball, I’m going to put the ball in the box,’ and for him to do it, that was a special moment that only a special player could accomplish.”

Samuel has 1,880 yards from scrimmage and 15 touchdowns this season, including the playoffs. 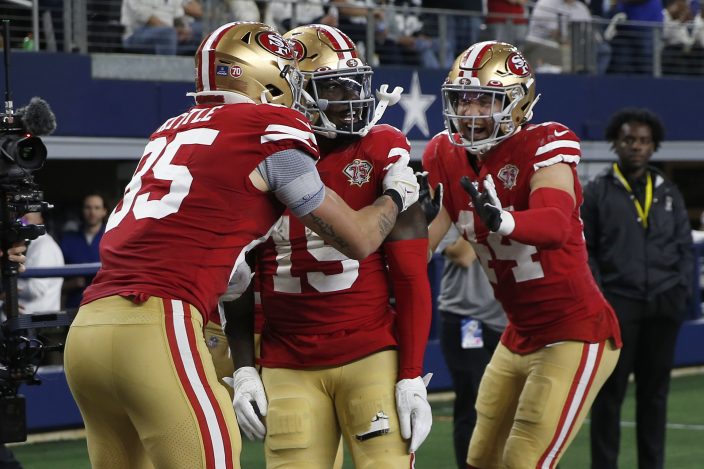 Green Bay’s most obvious concern is slowing down a 49ers rushing attack. Elijah Mitchell and Samuel combined to run for 168 yards against the Cowboys.

The Packers say they also must watch out for what linebacker De’Vondre Campbell referred to as the “eye candy." Campbell was referring to various shifts and pre-snap motions that Shanahan uses to get defenders looking the wrong way. 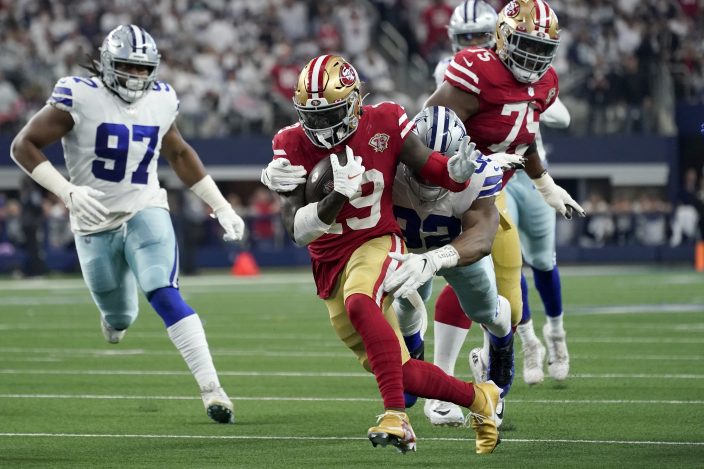 “The way he designs his plays, the motions, and all the different kinds of shifts and all that kind of stuff, he gets everybody’s eyes wandering,” Packers defensive tackle Kenny Clark said. “So if your eyes are in the wrong place, if you’re not doing your job or doing what you’re coached to do, he’s able to exploit that.”

Packers offensive tackle David Bakhtiari (knee) and cornerback Jaire Alexander (shoulder) are questionable and wide receiver Marquez Valdes-Scantling (back) is doubtful. The Packers are expecting wide receiver Randall Cobb (core) and offensive tackle Billy Turner (knee) back from injuries that knocked them out for the latter part of the regular season.

Green Bay’s Davante Adams caught 12 passes for 132 yards and a touchdown in the Packers’ regular-season victory over the 49ers.

San Francisco is stronger in the secondary now than back in September thanks to Thomas’ late-season emergence, but defensive coordinator DeMeco Ryans knows slowing down Adams will be a tall task.

“They make it difficult because they do a great job of moving Davante around,” Ryans said. “He doesn’t stay at one spot. He can move into the slot. He can play outside. He’s all over the place.”

Saturday’s forecast in Green Bay calls for a high temperature of 19 degrees with a low of 7, though snow isn't expected.