There was a brief moment of nostalgia inside the Daytona 500 Club when reigning IMSA sports car champions Pipo Derani and Felipe Nasr crossed paths, spoke briefly in Portuguese, then shared a warm embrace.

The Brazilians were celebrating the championship as teammates only 10 weeks ago. Now here they were in a hospitality suite inside Daytona International Speedway preparing to open the 2022 season as rivals.

Nasr left Action Express Racing after winning the title to become a Porsche factory driver. He is tasked with preparing the Penske Porsche Motorsports LMDh program for its 2023 debut, a job that includes driving a Team Penske entry in this year's World Endurance Championship and an opportunity to bring Roger Penske back to the 24 Hours of Le Mans for the first time since 1971. 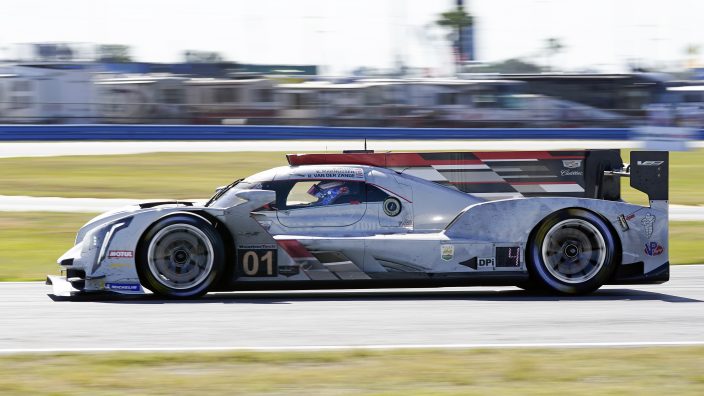 But first comes the Rolex 24 at Daytona, the unofficial opening event of the North American racing season. Instead of being teammates in the 60th running trying to defend their overall title, Derani and Nasr will be rivals.

“We achieved what we meant to achieve as a team, Felipe and I, and things change," Derani said. “I'm happy to be here as the champion. It's a different time, but a fantastic time.”

The action began Friday, the first of three days of preparation for the twice-round-the-clock endurance race that begins Jan. 29 and ends 24 hours later. Derani is back with Action Express, as is Mike Conway, the team's endurance driver since 2017. Nasr has been replaced by Tristan Nunez, the 26-year-old Florida native and son of former professional tennis player and coach Juan Nunez. 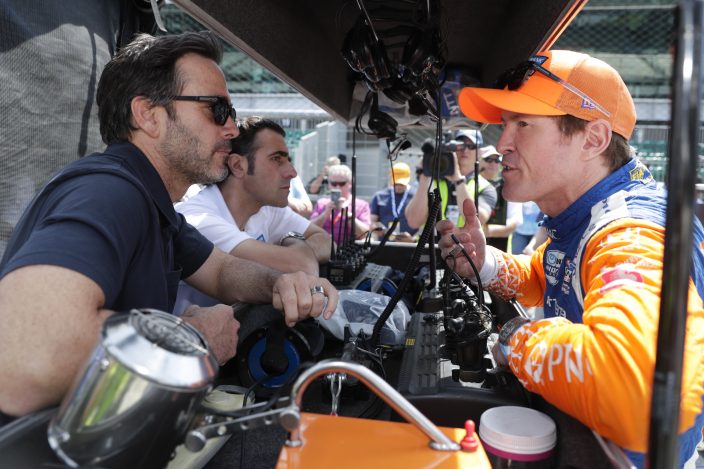 FILE - NASCAR driver Jimmie Johnson, left, and Indycar driver Scott Dixon, right, talk during practice for the Indianapolis 500 IndyCar auto race at Indianapolis Motor Speedway in Indianapolis, in this May 16, 2019, file photo. Johnson and Dixon will be competing in the Rolex 24 at Daytona endurance race that begins next Saturday, Jan. 29, 2022, at 1:30m p.m. ET. (AP PhotoMichael Conroy, File)

Nasr is the defending IMSA champion, but he has only Daytona then the remaining three IMSA endurance races on his 2022 schedule. He's committed this season to work for Porsche and Penske in an unconventional gap year, leaving only enough free time to assist Pfaff Motorsports in the IMSA debut of a new GTD Pro class.

It means Nasr won't be running for the overall race win; the victor will come from the Daytona Prototype international class, the category where Derani and Action Express are entered. But the Grand Touring class of enhanced production cars, split it into two divisions beginning this year, accounts for 36 of the whopping 61 entrants in next weekend's race.

“It feels a little weird, I guess, but I am getting used to it,” said Nasr. He tested earlier this week at Sebring with Penske, who turns 85 next month, present for the session and their first meeting. 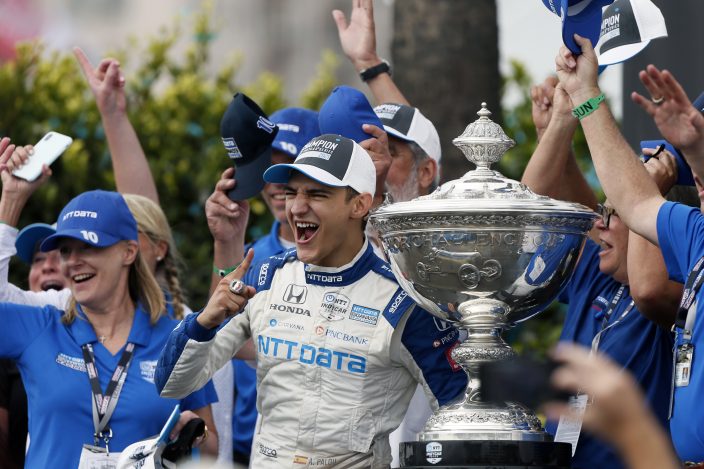 FILE - NTT IndyCar Series winner Alex Palou, center, celebrates with the trophy with team members after taking fourth place in an IndyCar auto race at the Grand Prix of Long Beach, Sunday, Sept. 26, 2021, in Long Beach, Calif. Palou will compete in the Rolex 24 at Daytona for the first time. (AP PhotoAlex Gallardo, File)

“I'm very excited about this new challenge and since I've chosen to be a race car driver, challenges make a big part of your career," Nasr said. "I had the chance to meet Roger in person... and you can tell he's super excited on this new project. It's just great to see the same energy within the project.”

The track is open Friday and Saturday for two full days of practice and a 100-minute qualifying race Sunday that will set the starting grid for next weekend.

The total number of cars planning to start next Saturday is the most at Daytona since 2014 and drivers have dropped in from all over the world. There are more than 50 past Rolex 24 winners spread through all five of the classes. 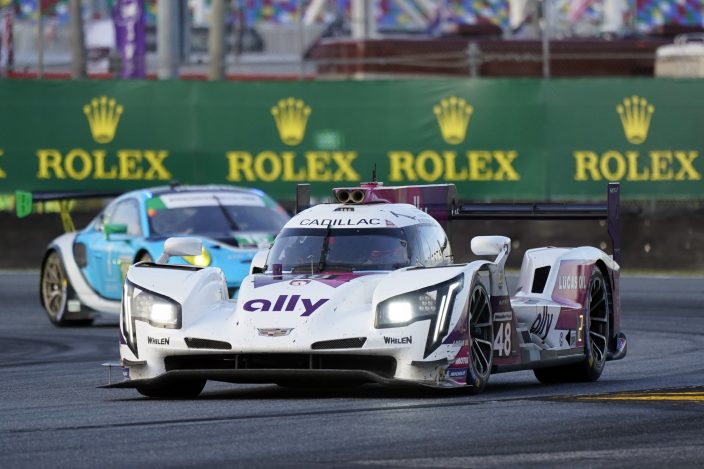 FILE - Jimmie Johnson drives the Cadillac Dpi during the Rolex 24 hour auto race at Daytona International Speedway, Saturday, Jan. 30, 2021, in Daytona Beach, Fla. Johnson is part of the No. 48 Cadillac team that will compete in the race beginning Jan. 29, 2022. (AP PhotoJohn Raoux, File)

The 24 Hours of Le Mans winners are in Daytona, with two-time Rolex winner Kamui Kobayashi back to drive one Action Express car with his WEC championship teammate Jose Maria Lopez making his debut. Conway, also a part of the champion WEC team, is in the sister Action Express car.

IndyCar has a dozen drivers in the field, including all four from Chip Ganassi Racing. Ganassi, in his second year as the flagship Cadillac team, has once again assembled a pair of “star cars” by bringing reigning IndyCar champion Alex Palou and two-race winner Marcus Ericsson to their first Rolex, while six-time series champion Scott Dixon is back for the 19th consecutive year.

Jimmie Johnson, the seven-time NASCAR champion who will run the full IndyCar season for Ganassi this year, has also returned in a combined effort between Action Express and Hendrick Motorsports. He's part of the No. 48 Cadillac team that was runner-up at the Rolex a year ago, and Johnson is the centerpiece of the lineup with Kobayashi, Lopez and Mike Rockenfeller.

Also in the seven-car top DPi class is four-time Indianapolis 500 winner Helio Castroneves, who moved from last year's overall Rolex winning team to Meyer Shank Racing alongside Simon Pagenaud. The two former Penske drivers will both be full-time drivers for Michael Shank in IndyCar this year.

Alexander Rossi, another Indianapolis 500 winner, will also return for his only scheduled endurance race of the year. Because he's in a contract season in IndyCar with Andretti Autosport, Rossi told Wayne Taylor Racing he only has time to try to help the team defend last year's Rolex victory alongside Filipe Albuquerque and Ricky Taylor; Castroneves was replaced by Will Stevens.

Pato O'Ward and Colton Herta, two of IndyCar's young stars who both have Formula One aspirations, have teamed with DragonSpeed USA in the Le Mans Prototype 2 class with Devlin DeFrancesco, an upcoming IndyCar rookie, and Eric Lux. Rinus VeeKay is also in the class that has 10 entrants for the second consecutive year, including defending Rolex class-winning team Era Motorsport and reigning class champions PR1 Mathiasen Motorsports.

The entry list in the Le Mans Prototype 3 class expanded from six to 10 in the second season of the category. Riley Motorsports won both the Rolex and season championship and has returned, and four-time Rolex winner Joao Barbosa is driving for Sean Creech Motorsport.

This new class replaced GT Le Mans this season and is loaded with 13 entries among eight different manufacturers. Corvette Racing won both the Rolex and the championship with the No. 3 entry of Antonio Garcia, Jordan Taylor and Nicky Catsburg. The No. 4 Corvette plans to run only the Rolex and then shift to a full WEC season.

This is the class where Nasr will compete in a Porsche with Pfaff Motorsports, which moved to GTD Pro after winning last year's GT Daytona championship. The Rolex will mark the GTD Pro debuts for Aston Martin, Ferrari, Lamborghini and Lexus.

The class is now running under the same regulation specifications as the new GTD Pro class but each team is required to have drivers with lower-ranked bronze or silver ratings in its lineups. The class has 22 entries — up from three last season — among nine manufacturers.

Mercedes-AMG brought both of its teams back that finished 1-2 in last year’s Rolex. Andy Lally, who leads all drivers in the field with five Rolex victories, returns with Magnus Racing in its debut in the Aston Martin Vantage GT3.