Reggie Jackson scored 19 points, including two free throws with 18.2 seconds remaining, and the Los Angeles Clippers rallied from a 24-point second-half deficit to beat Joel Embiid and the Philadelphia 76ers 102-101 on Friday night.

Nicolas Batum had 15 points, seven rebounds and a key steal late in the game for the Clippers. Los Angeles, playing the second of an eight-game, 13-day trip, won for the second time in its last five games.

Embiid, who tied his career high with 50 points on Monday night, had 40 points, 13 rebounds and six assists. Tobias Harris added 20 points and Tyrese Maxey had 19 points and eight assists for Philadelphia, which lost for the third time in its last 12. 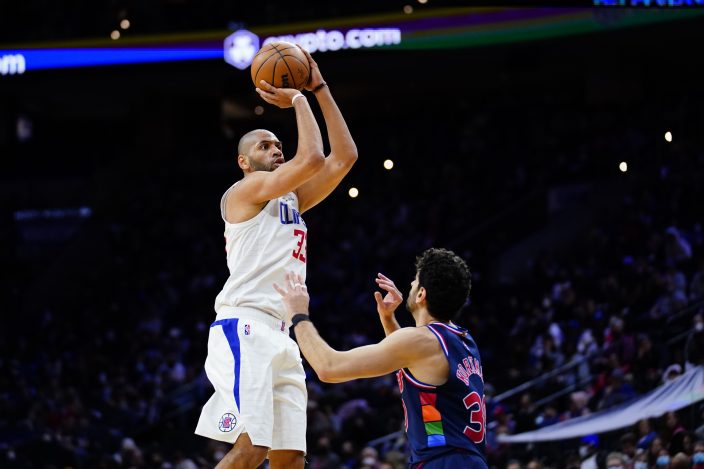 Los Angeles Clippers' Nicolas Batum, left, goes up for a shot against Philadelphia 76ers' Furkan Korkmaz during the second half of an NBA basketball game, Friday, Jan. 21, 2022, in Philadelphia. (AP PhotoMatt Slocum)

Marcus Morris’ 3 with 1:52 left tied it at 96. Batum stripped Embiid on Philadelphia’s ensuing possession, and Ivica Zubac’s layup put the Clippers up 98-96 with 1:30 remaining.

Los Angeles stretched its lead to 100-97 on Amir Coffey’s 8-footer with 39.7 seconds to play. Embiid then made a pair of free throws with 22 seconds remaining. Jackson then sank his free throws for LA. Up 3, the Clippers let Embiid go in for an easy layup.

The 76ers quickly fouled Morris, who missed both free throws with 9.4 seconds left, but Maxey’s runner at the buzzer was short. 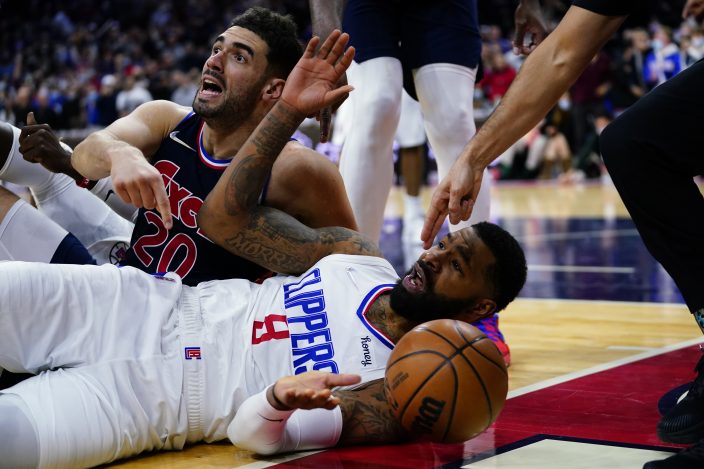 Embiid started slowly but heated up in the second quarter.

First, the nearly unguardable 7-footer hit a 3-pointer. Then, he stole the ball, dribbled coast to coast and, looking like Magic Johnson in his heyday, beat the defense single-handedly and finished with a one-handed dunk. On the next possession, he faked a drive, then pulled back and smoothly swished a 16-footer.

Late in the quarter, Embiid flew past Isaiah Hartenstein for a too-easy, two-handed dunk, helping the Sixers turn their seven-point first-quarter deficit into a 54-40 halftime lead. Philadelphia extended its advantage to 68-44 when Harris made a pair of free throws with 7:39 left in the third. 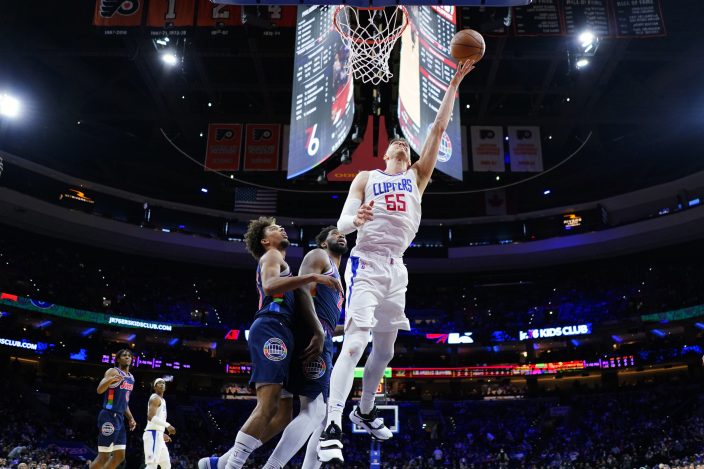 It looked like the 76ers had the game in control, but the Clippers clawed back.

Lue was happy to be in Philadelphia to visit with 76ers coach Doc Rivers, his coaching mentor. Lue played for Rivers in Orlando from 2003-04.

Philadelphia 76ers' Joel Embiid (21) reacts after not getting a foul call during the second half of an NBA basketball game against the Los Angeles Clippers, Friday, Jan. 21, 2022, in Philadelphia. (AP PhotoMatt Slocum)

Rivers hired Lue as an assistant in Boston in 2011. Lue entered Friday 197-132 in six seasons as a head coach with the Clippers and in Cleveland, where he won the NBA title in 2016.

“He gave me my first opportunity,” said Lue, who succeeded Rivers as Clippers coach in 2020. “Someone that’s mentored me my whole coaching career and someone I look up to, so it’s just good to see him.” 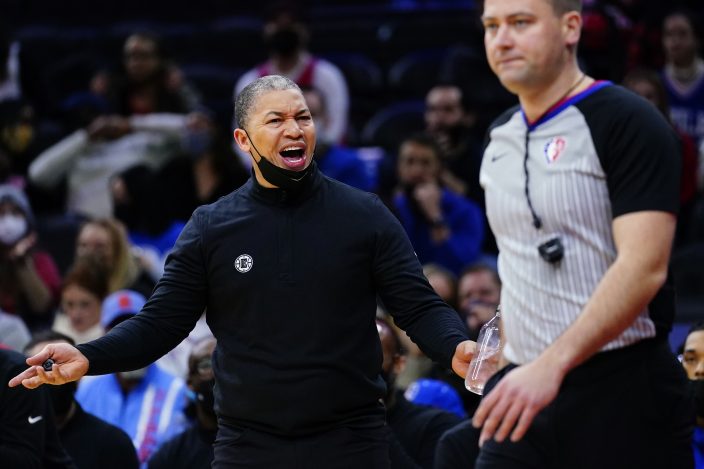 Los Angeles Clippers' Tyronn Lue yells to referee Gediminas Petraitis during the first half of an NBA basketball game against the Philadelphia 76ers, Friday, Jan. 21, 2022, in Philadelphia. (AP PhotoMatt Slocum)

Clippers: Batum returned to the lineup after missing Wednesday’s game against Denver due to health and safety protocols. ... Paul George (right elbow) has missed the last 15 games, and Kawhi Leonard (right knee) hasn’t played all season.

76ers: Danny Green (right hip) missed his fifth in a row, Matisse Thybulle (right shoulder) his fourth straight and Shake Milton (back) his ninth. Seth Curry (ankle) also was out. 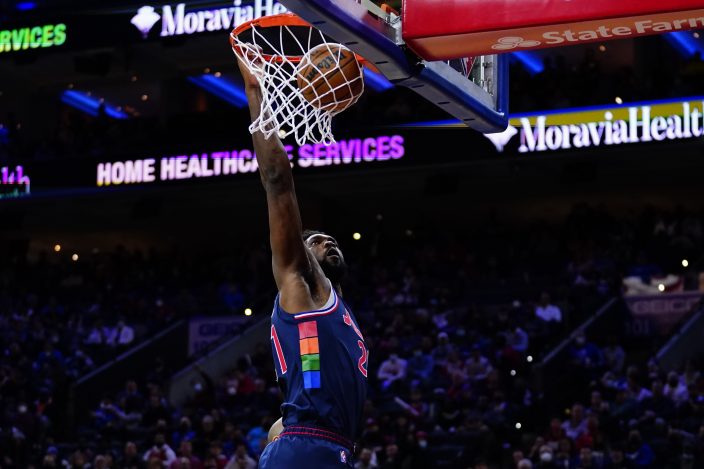 Philadelphia 76ers' Joel Embiid dunks the ball during the first half of an NBA basketball game against the Los Angeles Clippers, Friday, Jan. 21, 2022, in Philadelphia. (AP PhotoMatt Slocum)

Morris was back on the court after sitting out Wednesday due to personal reasons. The Philadelphia native had 12 points and nine rebounds. ... The teams' second meeting this season will be March 25 in Los Angeles.

Clippers: At the New York Knicks on Sunday.

76ers: At San Antonio on Sunday.