Cammi Granato had never forgotten the young girl she lent her stick and gloves to during one of the former U.S. Olympian’s first hockey camps in Chicago in the late 1990s.

It was years later when Granato discovered that girl just happened to be Hilary Knight.

“Her stick broke and I said, ‘Here, just take mine right now,’ because she didn’t have another one. I mean, she was so little,” Granato recalled. “I remember her distinctly at that moment. I didn’t know it was Hilary until Hilary told me years later that it was her.” 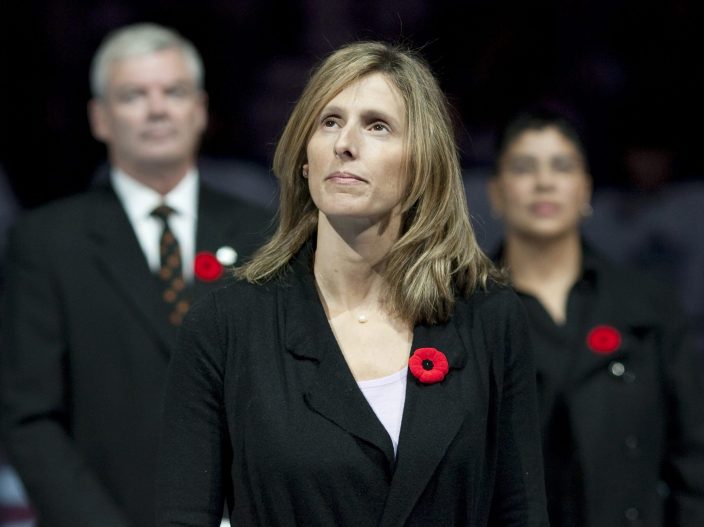 FILE - Cammi Granato stands on center ice after being inducted into the Hockey Hall of Fame before an NHL game between the Toronto Maple Leafs and the Buffalo Sabres in Toronto, Nov. 6, 2010. Granato had never forgotten the young girl she lent her stick and gloves to during one of the former U.S. Olympian’s first hockey camps in Chicago in the late 1990s. It was not until years later when Granato discovered that girl just happened to be Hilary Knight. (AP PhotoThe Canadian Press, Chris Young, File)

Knight was eight, and drawn to the sport in large part due to Granato, who captained the 1998 United States team that beat Canada in Nagano to win the Winter Olympics' first women’s hockey gold medal.

The symbolism of her passing the stick on to Knight isn’t lost on the 50-year-old Granato.

Much like Granato and her teammates did to inspire a generation of girls to take up hockey, the 32-year-old Knight is doing the same, having become the face of a U.S. team preparing to defend its latest Olympic title at the Beijing Games.

“That’s the one thing I really admire about this group of women. They’re actually out there growing the game, pushing the envelope for more rights, for more equality while they’re playing,” said Granato, the first female Hockey Hall of Fame inductee who now serves as a scout for the NHL's Seattle Kraken.

“So Hilary, both on and off the ice, what she means for the growth of the game is exponential,” she added. “She’s an incredible role model. She’s got a great personality. She’s fun. She a lethal goal-scorer. ... she’s a powerhouse.”

Knight is making her U.S. women's hockey record-matching fourth Olympic appearance in which she’s won a gold and two silvers.

The 5-foot-11 forward has a powerful skating style and hard shot, with Knight ranking fifth in the U.S. Olympic record book with 17 career points (six goals, 11 assists), one behind Granato. At the world championships, Knight surpassed Granato’s records (44 goals and 78 points) in August by increasing her totals to 47 goals and 80 points.

A few months later, Knight was still having difficulty grasping the reality of moving ahead of her idol.

“It still feels so distant still,” she said. “It still feels very much that Cammi’s No. 1 to me, personally, you know? Because that’s what it feels like, right? I still feel very much so like a little kid in many ways.”

She continues to play because of the joy she still draws from hockey. Yet Knight has proven more than capable of taking on many of the challenges women have faced in advancing the game.

Knight was at the forefront of the U.S. players' threat to boycott the 2017 world championships on home soil, successfully achieving their bid for better pay and more equitable treatment from USA Hockey. Two years later, Knight helped form the Professional Women’s Player’s Hockey Association, which continues to push for a North American women’s pro league with sustainable wages.

On the ice, Knight has led the U.S. in points and/or scoring at five world championship tournaments. At the 2017 worlds, she scored the overtime goal to seal a 3-2 win over Canada in the gold medal game.

Knight’s dual impact has earned her immense respect from teammates and opponents.

“She puts her team before her always, and fights until the end,” Finland captain Jenni Hiirikoski said. “We have a lot of good battles on the ice, and she’s a really big star for our game. It’s been an honor to play against her so many years, and hopefully she’ll also play many more.”

“When I was a young girl, I looked up to Cammi Granato. Now, no one’s Cammi, but when you look at someone who carries the weight of this sport on her shoulders like Cammi did ... you can put Hilary Knight in that category,” she said. “So what does Hilary Knight mean to this game? You can’t put it into words. You just watch it evolve in front of your eyes.”

Knight politely deflects the attention, focusing ahead on the next challenge in becoming the first U.S. team to successfully defend its Olympic title. There is always a new test to keep her coming back.

“Honestly, coming in every day and being humbled by the sport because it’s a challenge, right?” Knight said. “That’s what keeps us all hungry to continue to come back and try to be a part of this team. The women in that room are incredible, and it’s intoxicating in a way. You just want to be a part of it.”

Knight recalls attending Granato’s camp, but a more vivid memory is a meeting they had in 2006, when the national team held an exhibition game against the Choate private school boys’ team in Connecticut. Her only disappointment was school officials not letting her suit up and play.

That summer, however, Knight earned an invite to join the national team, and a year later made her debut while being awarded Granato’s No. 21 jersey.

Knight is now the team’s senior member. Difficult as it’s been to watch many of her contemporaries retire, her passion to keep playing is rekindled by the young, talented newcomers. Just don’t tell her that defender Caroline Harvey was five when Knight made her national team debut in 2007.

“Yeah, I don’t do math any more,” Knight said with a chuckle.

Reminded the U.S. series of pre-Olympic games was called “The MyWhy Tour,” Knight shared what her why was.

“It’s for the next generation. I went through this experience. I had great role models,” Knight said. “And to be able to spark some sort of inspiration in the next generation, to go out here and do better than we’ve done it, is at the end of the day my why.”