Alize Cornet stood midcourt on Margaret Court Arena waving to the singing fans and patting her heart after an Australian Open third-round win on a sunny Saturday afternoon.

While the experienced French player was touched to be serenaded on her 32nd birthday, she much preferred her own gift — the shot at a Grand Slam quarterfinal in what could be her last year on the tour.

Cornet had a 4-6, 6-4, 6-2 comeback win over 29th-seeded Tamara Zidansek in 2 hours, 43 minutes on the hottest day of the tournament so far at Melbourne Park. 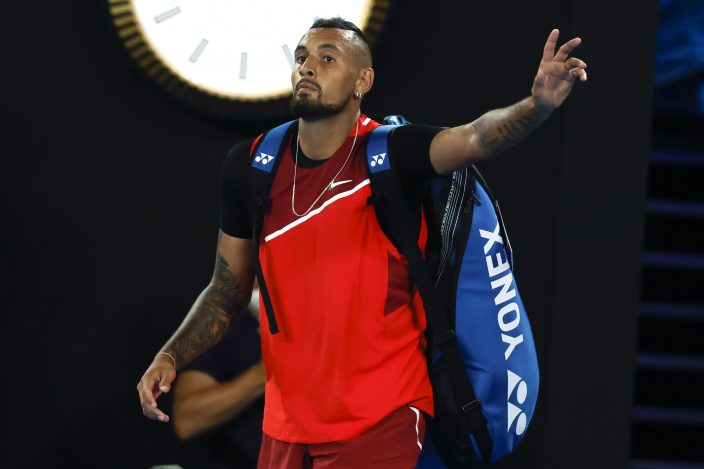 Nick Kyrgios of Australia gestures as he walks from Rod Laver Arena following his second round loss to Daniil Medvedev of Russia at the Australian Open tennis championships in Melbourne, Australia, Thursday, Jan. 20, 2022. (AP PhotoHamish Blair)

She has reached the fourth round in Australia for the first time 13 years, and she recalled how she had a match point before losing to eventual finalist Dinara Safina of Russia the previous time back in 2009.

“I think that’s why we all keep playing and keep pushing ourselves because we’re so addicted to these feelings, this joy right after the match point," Cornet said. “It’s really amazing. To start the year this way definitely makes me want to play some more tennis.”

The No. 61-ranked Cornet will next play two-time major winner Simona Halep. She's not looking beyond that, yet.

“I’m don’t want to think about this quarterfinal because I have the feeling it’s getting a little like an obsession," she said. “I’m enjoying so much my run here so far. I had a really great time on the court again with the crowd supporting me. I want to fill my heart with all this energy without thinking I might get finally my quarterfinal that I’m looking for for the past 15 years.”

Nick Kyrgios claimed he was threatened in the players’ gym at Melbourne Park after he and Thanasi Kokkinakis upset top-seeded Croatian pair Nikola Mektic and Mate Pavic in an Australian Open second-round doubles match in front of a raucous home crowd on Friday.

The trouble started, according to Kyrgios, when a member of the support team approached him after the match.

“Just letting you know after yesterday’s chop fest in doubles my opponent’s coach and trainer proceeded to threaten to fight in the players gym ... tennis is a soft soft sport ... all because I moved and hit them with a tennis ball,” Kyrgios wrote Saturday on Twitter.

Kokkinakis, describing it in a social media post, said “That was crazy!!" and joked about it being like UFC.

What was the first priority for Adrian Mannarino ahead of his fourth-match against 20-time major winner Rafael Nadal?

The French left-hander didn’t get to bed until almost dawn on Saturday after a late victory ensured his best Grand Slam result.

“I don’t feel good to be honest. I’m kind of exhausted right now, but it was cool," Mannarino said in post-match interview. "I was so focused on what I had to do. I was not thinking about the fact I was tired. I was like, ‘OK, go get the next point.’”

Even at the hour it finished, there were still some vocal fans at Margaret Court Arena.

“The crowd was cool. Some people had a couple of drinks, I guess, and they were commentating," Mannarino noted.

“It’s 3 a.m. I don’t really care about who I’m playing next," Mannarino said. “Is the last thing I’m going to think about. I just want to enjoy the moment right now.”

Ex-champion Sofia Kenin out in 1st round of Australian Open