If she can stay upright, stay within the gates, there’s no beating Sofia Goggia in downhill these days. That’s why she’s an overwhelming favorite to repeat as Olympic champion at next month’s Beijing Games.

A week after crashing at high speed in Austria, Goggia captured her fourth win in five World Cup downhills this season on Saturday despite a mishap-filled run in which the Italian was all over the shortened Olympia delle Tofane course.

Hit by a big gust of wind shortly into her run, Goggia was pushed way wide and had to check her skis to get back into the racing line. A bit further down, she again drifted off course and almost missed a gate. But Goggia regained her speed after each mishap and won by 0.20 seconds ahead of Ramona Siebenhofer of Austria. 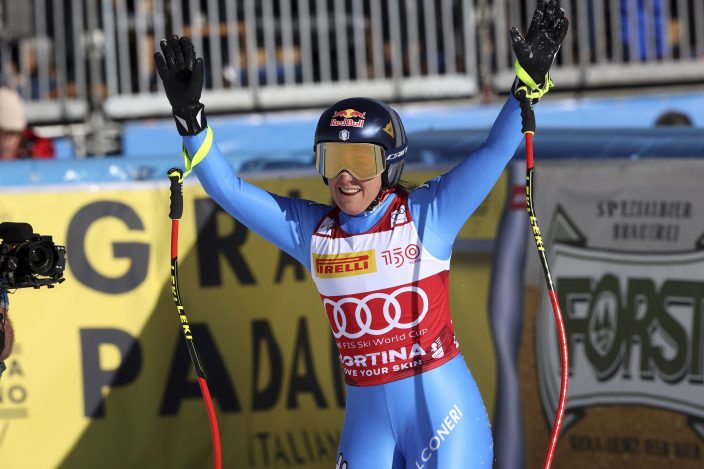 Goggia appeared upset with herself immediately after crossing the finish line, then was clearly surprised when she picked her head up and saw she was in the lead, raising her hands as if to say, “How did that happen?” Then she fell backward onto the snow in delight.

“I had so much wind that I got twisted around,” Goggia said. “It’s incredible, with everything that I did today, to see the green light. It’s a dream, especially here in Cortina. When I realized I was first my heart exploded.”

Goggia missed her home world championships in Cortina last season after breaking a bone in her right knee. Then at Altenmarkt-Zauchensee last Saturday, she was leading when she lost control in a dark section of the course and hit the safety nets. She avoided serious injury but was banged up to the point that by Monday she couldn’t walk. 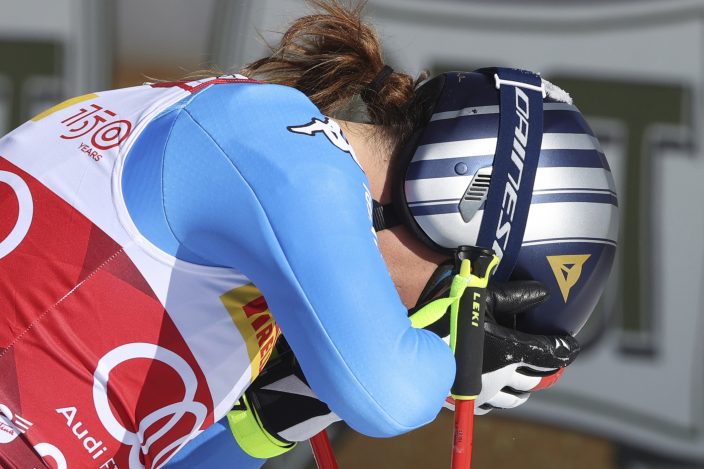 “I had a tough week,” Goggia said. “I was doing physical therapy all day.”

Ester Ledecka, the Czech athlete who won golds in both skiing and snowboarding at the 2018 Olympics, finished third, 0.26 behind Goggia.

It was Goggia’s sixth win overall this season, including two super-Gs, and she can add to her career total of 17 victories in another super-G on Sunday. 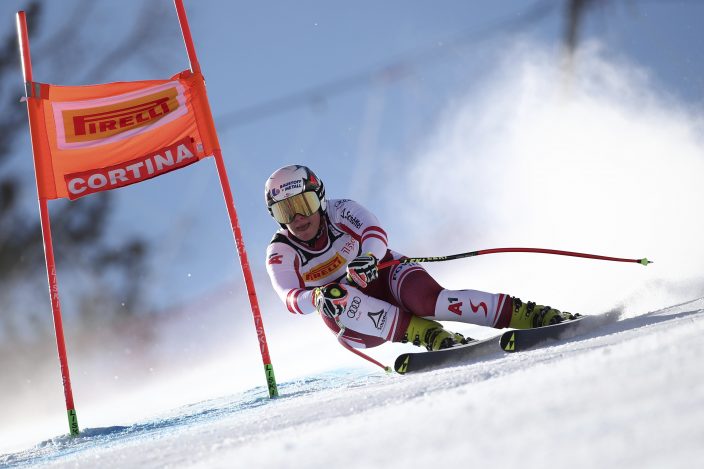 Goggia also won a downhill in Cortina four years ago, when she was just starting to succeed Lindsey Vonn as the sport’s top speed skier.

“Today I felt all the warmth and affection of the fans,” Goggia said. “I think this is one of the greatest wins of my career — for many reasons.”

Strong winds on top forced organizers to lower the start, eliminating several characteristic sections of the Cortina course, such as the Tofane Schuss, a chute between two walls of rock.

With about a third of the course removed, 30 seconds were chopped off from the times of Friday’s final training session, which Goggia — who else? — led.

Breezy Johnson, the American who finished second in the opening three downhills of the season, missed her second straight downhill after crashing in Friday’s second training session. It was her second crash in two weeks.

Ledecka grabbed her first podium result of the season in skiing. Her best result in snowboarding’s parallel giant slalom this season also came in Cortina, having won a World Cup race last month on the other side of the valley at the Italian resort.

Lara Gut-Behrami, the Swiss skier who won two gold medals at last season’s worlds in Cortina plus last weekend’s downhill when Goggia crashed, made several mistakes in her run and finished ninth.

Federica Brignone, like Gut-Behrami a former overall champion, had to place her skis into a snow-plow position to regain control over a jump midway down. She finished 19th.

The top American finishers were Jacqueline Wiles in 14th and Alix Wilkinson in 18th for the 21-year-old's first World Cup points.

The Beijing Games open Feb. 4 and the women’s downhill is scheduled for Feb. 15.