Toni Eggert and Sascha Benecken are World Cup overall champions for the sixth time, getting that title back just in time for the Olympics.

Eggert and Benecken won the season’s World Cup doubles finale Saturday, a win that was good enough to vault them into the top spot in the season-ending standings. 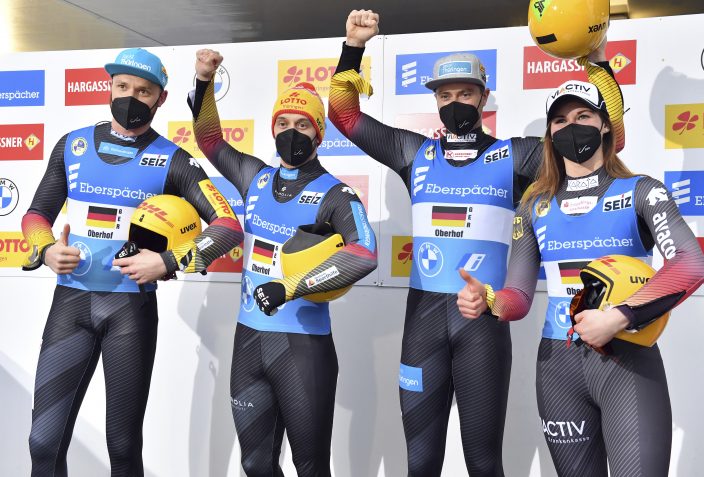 Toni Eggert, Sascha Benecken, Johannes Ludwig and Julia Taubitz from Germany, from left, are happy about the victory in the team relay competition at the Luge World Cup in Oberhof, Germany, Sunday, Jan. 16, 2022. (Martin Schuttdpa via AP)

Eggert and Benecken finished the season with 907 standings points, 24 more than the Latvian sled of Andris Sics and Juris Sics. The Sics brothers finished fifth in Saturday’s race; they needed a second-place finish hang on to the top spot and claim the overall title.

It’s the sixth World Cup title in the last eight seasons for Eggert and Benecken.

The U.S. did not have a sled in Saturday’s doubles finale, with the Olympic-bound pairing of Zack DiGregorio and Sean Hollander skipping the last two races to concentrate on preparations for next month’s Beijing Games.

Wolfgang Kindl of Austria rallied in the second heat to win the final race of the men’s World Cup season, finishing in 2:10.246.

Latvia’s Kristers Aparjods was second in 2:10.267 and Nico Gleirscher of Austria was third in 2:10.546. Kindl was third after the first run behind Italy’s Dominik Fischnaller and Germany’s Johannes Ludwig, both of whom found trouble late in their second runs and wound up finishing eighth and 11th, respectively.

For the U.S., Jonny Gustafson tied a season-best by finishing 14th and Olympic silver medalist Chris Mazdzer finished 18th. Gustafson, Mazdzer and Tucker West will be racing for the U.S. at the Beijing Games.

Ludwig had already clinched the seasonlong World Cup title entering the finale and finished with 871 points after an 11th-place finish Saturday. Kindl was second in the final standings with 791, while Aparjods and Germany’s Felix Loch tied for third with 691.

The World Cup sliding season ends Sunday with a women’s race and a team relay.