In April, Brazil's federal police stormed the helipad of a boutique seaside hotel in Rio de Janeiro state, where they busted two men and a woman loading a chopper with 7 million reais ($1.3 million) in neatly packed bills.

The detainees told police they worked for G.A.S. Consulting & Technology, a cryptocurrency investment firm founded by a former waiter-turned-multimillionaire who is the central figure in what is alleged to be one of Brazil’s biggest-ever pyramid schemes.

Police say the company owned by 38-year-old Glaidson Acácio dos Santos had total transactions worth at least $7 billion ($38 billion reais) from 2015 through mid-2021 as part of a Bitcoin-based Ponzi scheme that promised investors 10% monthly returns. 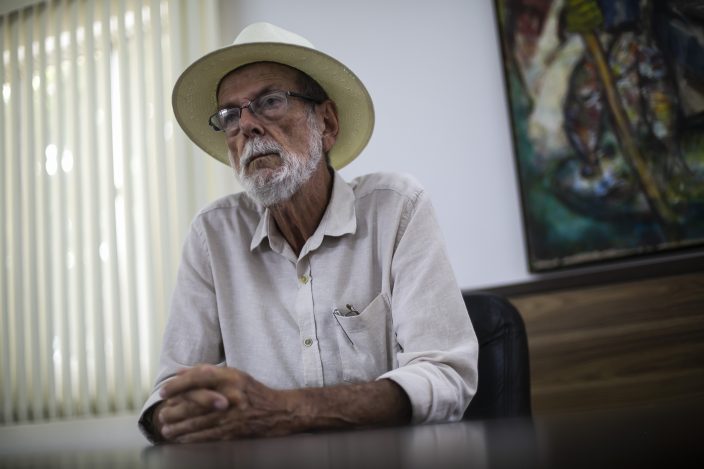 Mayor Jose Bonifacio listens during an interview in his City Hall office of Cabo Frio, Brazil, Wednesday, Dec. 15, 2021. Bonifacio acknowledges his city found itself under a spell. “The talk of the town was to know how much [bitcoin] was at, who was giving a bigger return,” he said.  (AP PhotoBruna Prado)

In hundreds of pages of documents obtained by The Associated Press, federal and state police and prosecutors accuse dos Santos and his associates of running a sophisticated racket defrauding thousands of small-scale investors who believed they were getting rich off Bitcoin’s steep appreciation. He is now in a Rio jail awaiting trial on charges including racketeering, financial crimes and ordering the murder and attempted murder of two business competitors. He remains under investigation in the attempted murder of a third competitor.

In public statements, dos Santos has repeatedly asserted his innocence. His lawyers didn’t reply to AP requests for comment.

Despite the long list of charges he faces, dos Santos represents an unlikely hero to his fervent supporters. Many view him as a modest Black man whose unorthodox Bitcoin business made them wealthy by gaming a financial system they believe is rigged by wealthy white elites. 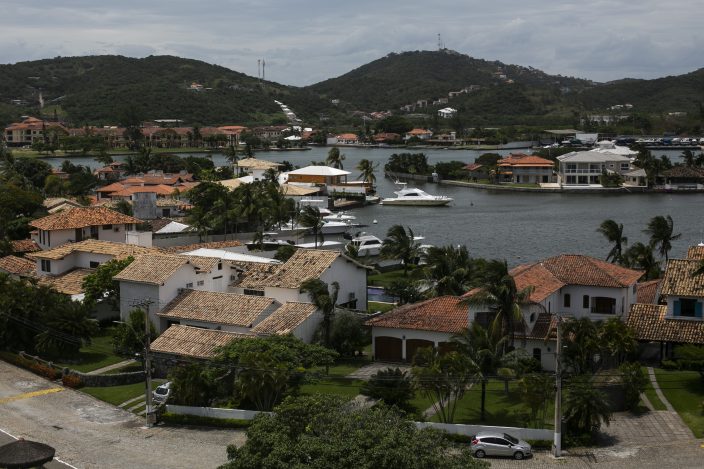 A view of the luxury condominium where former waiter-turned-multimillionaire Glaidson Acacio dos Santos had a home in Cabo Frio, Brazil, Wednesday, Dec. 15, 2021. Dos Santos, the founder of G.A.S Consulting & Technology, a cryptocurrency investment firm, is the central figure in what is alleged to be one of Brazil’s biggest-ever pyramid schemes. (AP PhotoBruna Prado)

The case also underscores the fast-growing appetite for cryptocurrencies in Brazil, where years of economic and political crises have made digital currencies an attractive shield against depreciation of the Brazilian real and double-digit inflation.

Bitcoin fervor was particularly keen in Cabo Frio, the resort town of 230,000 where G.A.S. was based. As G.A.S. revenues rose, enriching early adopters, copycat firms sprang up, seeking to cash in on the craze. A wave of cryptocurrency-related violence soon followed.

With so many alleged pyramid schemes, Cabo Frio came to be known as the “New Egypt.” And as the town’s top dog, dos Santos was dubbed the “Bitcoin Pharaoh." 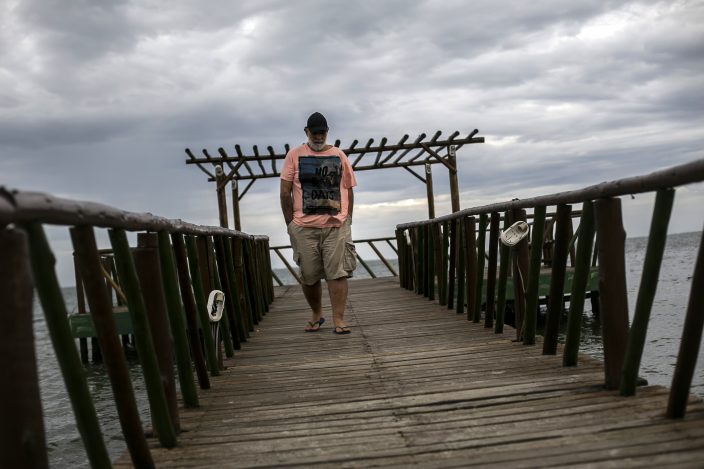 Gilson Silva do Carmo, an alleged victim of the G.A.S Consulting & Technology, a cryptocurrency investment firm, walks off after an interview in Iguaba Grande, Brazil, Wednesday, Dec. 15, 2021. Federal and state police and prosecutors accuse the firm of running a sophisticated racket defrauding thousands of small-scale investors who believed they were getting rich off bitcoin’s steep appreciation. Do Carmo watched in horror as the seizures and arrests unfolded; he had invested the rest of his savings in the company just weeks earlier. (AP PhotoBruna Prado)

Police say dos Santos began trading in Bitcoin after leaving his job as a waiter in 2014. A one-time evangelical preacher in training, he enlisted clients from the Universal Church of the Kingdom of God, Brazil’s largest neo-Pentecostal group, who earned a referral fee for bringing in fresh recruits and kicking back money to G.A.S., police documents say.

Jéfferson Colombo, a cryptofinance researcher at Sao Paulo’s Getulio Vargas Foundation, said religious groups are often targeted by pyramid schemers. “It’s through contacts that you increase the base of the pyramid,” he said.

In a statement, the Universal Church said it was cooperating with authorities and accused dos Santos of “harassing and recruiting” pastors and their flocks to join his company. 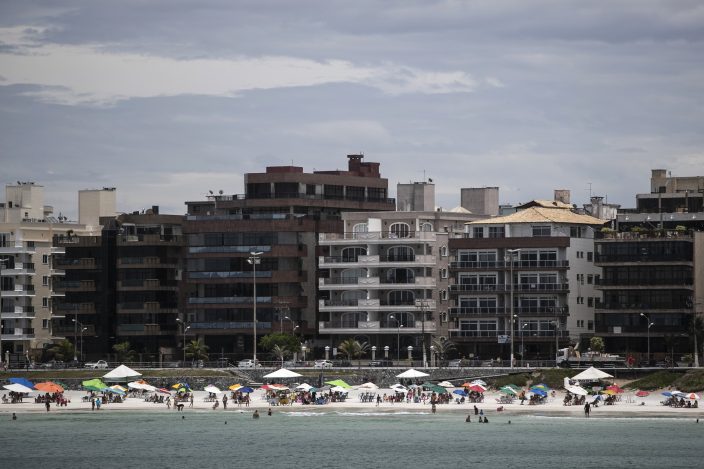 Beachgoers congregate on Fort Beach in Cabo Frio, Brazil, Wednesday, Dec. 15, 2021. As revenues rose for the cryptocurrency investment firm G.A.S Consulting & Technology, enriching some early adopters, copycat firms sprang up, seeking to cash in on the craze. Cabo Frio, the home of G.A.S. founder, 38-year-old Glaidson Acacio dos Santos, came to be known as the “New Egypt” and as the town’s top dog, dos Santos was the “Bitcoin Pharaoh." (AP PhotoBruna Prado)

By 2017, dos Santos was starting to make serious money — and attract authorities' attention. That year his company’s transactions totaled nearly 10 million reais ($1.8 million), 15 times higher than the previous year as money siphoned in and out of his bank accounts from all over Brazil, according to a federal police report. The country’s financial intelligence unit also noticed the company — at the time registered as a restaurant — was regularly trading cryptocurrency on online exchange platforms.

The alleged scheme worked like this, according to prosecutors: Dos Santos would instruct clients to deposit their money – in cash to avoid further scrutiny – into bank accounts run by managing partners. The money would then be transferred to dos Santos or his Venezuelan wife, Mirelis Yoseline Diaz Zerpa, who would either pocket it, use it to buy bitcoins and other cryptocurrencies as well as traditional financial assets, or pay off other members of the scheme.

Clients were promised a 10% monthly return on their investments over 12- to 48-month contract periods, but did not own the bitcoins they were told G.A.S. was purchasing with their money. And, they were assured, it was risk-free: They would get their entire initial investment back at the end of the contract. 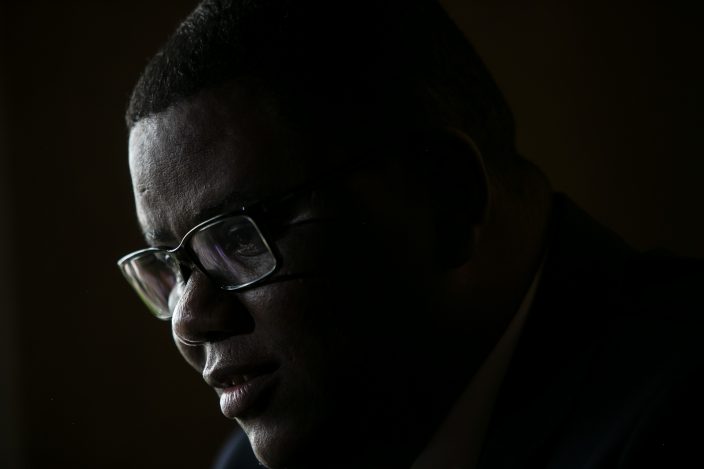 Lawyer Luciano Regis, 35, during an interview in Sao Pedro da Aldeia, Brazil, Wednesday, Dec. 15, 2021. Regis, a lawyer representing victims of G.A.S Consulting & Technology, a cryptocurrency investment firm founded by a former waiter-turned-multimillionaire who has become the central figure in what is alleged to be one of Brazil’s biggest-ever pyramid schemes. (AP PhotoBruna Prado)

“If he wanted to run for mayor, governor even, he’d win,” said Gilson Silva do Carmo, 52, one of dos Santos' alleged victims.

The chubby young man in thick-rimmed glasses was also gaining a taste for the high life, police and prosecutors said. Dos Santos bought expensive jewelry and a swanky apartment as contracts poured in from elsewhere in Latin America and as far away as the U.S., Europe and the Gulf. 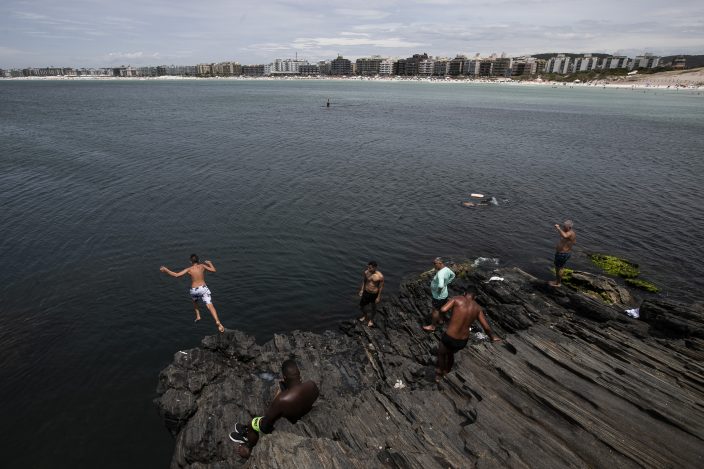 Bathers dive into the waters of Fort Beach in Cabo Frio, Brazil, Wednesday, Dec. 15, 2021. Brazil became one of the first countries in the world to approve Bitcoin exchange-traded funds, second only to Canada. In and around Cabo Frio, where some had seen their friends and neighbors reap rewards by investing their life savings in the cryptocurrency investment firm G.A.S Consulting & Technology, many began to fear the cost of missing out. (AP PhotoBruna Prado)

At the same time, Brazil’s securities regulator was making digital currencies more attractive: It authorized the country’s investment funds to invest in cryptocurrencies in 2018, giving them greater credibility. Last year, Brazil approved Bitcoin exchange-traded funds, only the second country in the world to do so. And Rio de Janeiro has recently said it wants to offer incentives to those paying city property taxes using bitcoins.

Meanwhile, trades in Brazilian reais on the world’s largest cryptocurrency exchange, Binance, jumped to nearly $8.5 billion in the fourth quarter of 2021, from just $152 million over the same period a year earlier, according to market data provider Kaiko.

In and around Cabo Frio, where residents had seen their neighbors reap rewards by investing their life savings in G.A.S., many began to fear missing out.

Do Carmo was among them. After catching COVID-19 and struggling to get back to work, he was forced to tap his retirement savings to make ends meet.

Then his therapist told him he sold his house to invest in G.A.S., and had been receiving 10% monthly returns for a year. Do Carmo invested 40,000 reais ($7,000) — just over half the money left in his retirement fund.

In Cabo Frio, dos Santos' success inspired other budding entrepreneurs to follow in his footsteps — not to mention those of Charles Ponzi, who died nearby in a Rio de Janeiro hospital charity ward in 1949. The Italian immigrant who engineered one of the largest scams in U.S. history in the 1920s was buried in a public Rio cemetery with his last $75.

Some competitors promised even higher returns than G.A.S. — 20% or more a month.

Cabo Frio Mayor José Bonifácio acknowledged his city found itself under a spell. “The talk of the town was to know how much (Bitcoin) was at, who was giving a bigger return,” he said.

In mid-April, he discussed with associates how rivals were encroaching on his turf, according to WhatsApp messages intercepted by federal police.

Less than four months later, on Aug. 4, Wesley Pessano, who advertised himself on social media as a cryptocurrency trader, was shot dead in his Porsche. Police accuse dos Santos of ordering the hit.

Rio state police have also linked two attempted killings to dos Santos and what they called his “extermination team.” On March 20, a trader known as Nilsinho was shot while driving his BMW through Cabo Frio. He was severely injured but survived. Three months later another firm’s operator was targeted, his car hit by 40 bullets; he also survived.

Things came to a head on April 28 when Rio federal police, acting on an anonymous tip, seized the 7 million reais at the helipad of the Insolito Boutique Hotel in Buzios, a short drive from Cabo Frio. A monthslong investigation into dos Santos' business followed.

On Aug. 25, alerted that dos Santos was planning to flee Brazil, federal police raided more than a dozen locations linked to G.A.S., including dos Santos' home where he was found with 13.8 million reais ($2.5 million) and taken into custody. Agents also found hard drives containing 10 times that amount in Bitcoin, gold bars, jewelry and several sports cars, including a white Porsche Panamera and an electric blue BMW Z4 convertible.

Sixteen other associates were also charged, including Diaz Zerpa, dos Santos' 38-year-old wife, who left the country weeks before the raid and is believed to be in Florida, according to authorities. They say she withdrew more than 4,300 bitcoins worth $185 million (1 billion reais). AP attempts to locate her were unsuccessful.

Do Carmo watched in horror as the seizures and arrests unfolded; he had invested the rest of his savings in the company just weeks earlier.

“I thought, ‘My God, what have I done?’” he said. “You watch everything you fought for, your entire life wash away from one moment to the next.”

Still, many early G.A.S. investors who had been receiving regular monthly payments refused to believe dos Santos did anything illegal.

After his arrest, a crowd gathered outside broadcaster TV Globo in Rio de Janeiro to protest coverage of the alleged racket. In October, scores of supporters blocked the street outside a federal courthouse in Rio, demanding his freedom.

Jeferson Brandão, a tax lawyer, G.A.S. investor and vocal advocate of dos Santos, said the company offered an attractive alternative to a banking sector that “only charges you fees.”

G.A.S. offered investors a chance to “take part in the profit," Brandão said. "'Instead of giving you a crumb of the cake, I’m going to give you a slice.’”

From prison, dos Santos has maintained his innocence. In an open letter to investors last month, he blamed the authorities for freezing G.A.S. assets and “prohibiting me from paying you.”

Prosecutors have identified at least 27,000 G.A.S. victims, with operations in at least 13 Brazilian states and seven other countries, including the U.S., United Arab Emirates, the U.K. and Portugal.

The true tally is likely much higher, said Luciano Regis, a lawyer representing dozens of victims. He said one of his clients enlisted her husband, mother, brother, sister-in-law and an 82-year-old aunt, investing a total 822,000 reais (about $150,000).

“It’s hard to have a conversation with anyone in Cabo Frio who doesn’t know someone who invested,” he said.