The fourth-seeded Krejcikova was ousted in the second round of her two previous trips to Melbourne Park and is into the last eight at the Australian Open for the first time.

She'll next play Madison Keys, who reached the semifinals in Australia in 2015 and was runner-up at the 2017 U.S. Open. 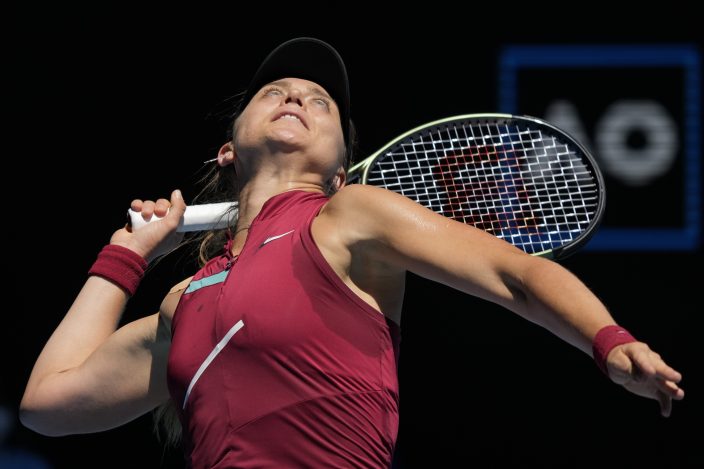 Paula Badosa of Spain serves to Madison Keys of the U.S. during their fourth round match at the Australian Open tennis championships in Melbourne, Australia, Sunday, Jan. 23, 2022. (AP PhotoSimon Baker)

Keys overpowered eighth-seeded Paula Badosa 6-3, 6-1 in the first of the fourth-round matches on Day 7 at Rod Laver Arena.

The 26-year-old American, who beat 2020 Australian Open champion Sofia Kenin in the first round, hit 26 winners and made only 18 unforced errors against Badosa to continue her unbeaten start to 2022. She claimed her sixth career title at a tune-up tournament in Adelaide last week.

Krejcikova went into her match against Azarenka believing the former 32-year-old, former No. 1-ranked player from Belarus was the favorite to win. 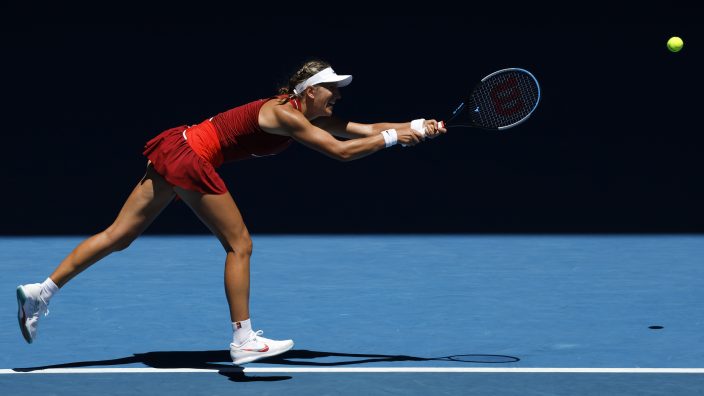 Victoria Azarenka of Belarus makes a backhand return to Barbora Krejcikova of the Czech Republic during their fourth round match at the Australian Open tennis championships in Melbourne, Australia, Sunday, Jan. 23, 2022. (AP PhotoHamish Blair)

“She’s a champion here. She likes this court. She’s very experienced on this court. I have a lot of respect for her,” Krejcikova said. But, "I was doing everything to get this one, really preparing for a dream like this.

“And yeah, I’m in the quarterfinals.”

The fourth-seeded Krejcikova needed only 85 minutes to beat the 2012 and 2013 champion, who made 28 unforced errors and dropped five service games. 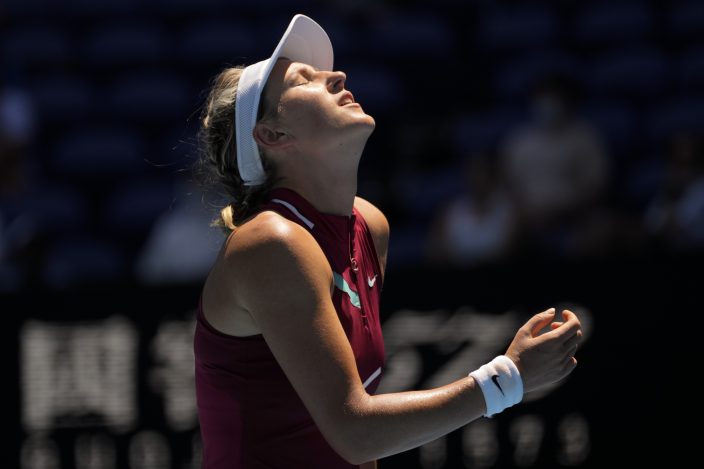 Victoria Azarenka of Belarus reacts after losing a point to Barbora Krejcikova of the Czech Republic during their fourth round match at the Australian Open tennis championships in Melbourne, Australia, Sunday, Jan. 23, 2022. (AP PhotoSimon Baker)

In later matches, top-ranked Ash Barty was scheduled to play No. 60-ranked Amanda Anisimova, who saved two match points before upsetting defending champion Naomi Osaka in the third round.

The winner of that match between Barty and Anisimova will play No. 21-seeded Jessica Pegula, who beat fifth-seeded Maria Sakkari 7-6 (0), 6-3 on Margaret Court Arena.

In the men’s draw, Rafael Nadal was continuing his quest for a men’s record 21st Grand Slam singles title when he faced French left-hander Adrian Mannarino.