When the vast majority of your life is happening within the four walls of your home, every square foot counts. So the past two years have inspired some serious, space-saving creativity.

“Everybody all of a sudden was just surrounded by their environment, just sort of thinking, ‘If I’m going to be spending this much time here, I really want it to be great quality space,'” says interior designer and HGTV host Vern Yip.

Oddly enough, one popular strategy for creating multipurpose spaces at home in 2022 is an innovation born more than a century ago: the Murphy bed, a fully made bed emerging from a wall to instantly transform a living room into a bedroom. 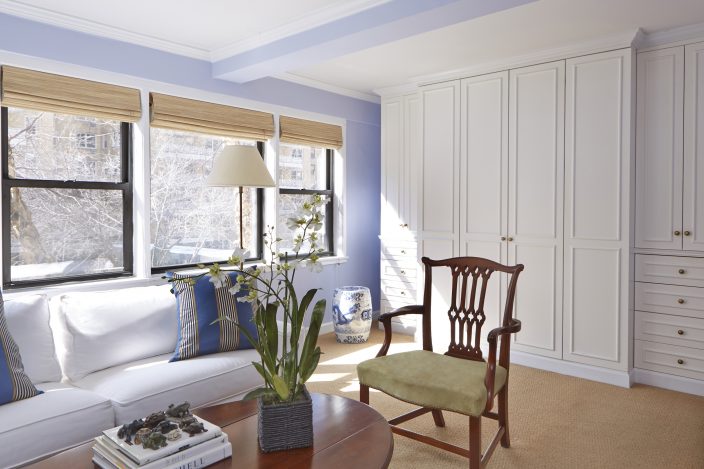 New Jersey-based interior designer Karen Topjian remembers seeing Murphy beds in old black-and-white Hollywood movies and thinking they looked wonderfully glamorous. It seemed almost magical, she thought. Unlike a sofabed that requires moving cushions and some degree of assembly, Murphy beds have the superpower of transforming a space with just a single motion.

Of course, the spring-loaded metal bed that nearly destroyed Charlie Chaplin in his 1916 short film “One A.M.” appeared pretty uncomfortable. Even the World War II-era models probably weren’t especially cozy, Topjian says, no matter how chic they looked in the movies. But technology has improved dramatically.

Today, she says, high-quality Murphy beds open easily and can be outfitted with high-end mattresses and lush bedding. 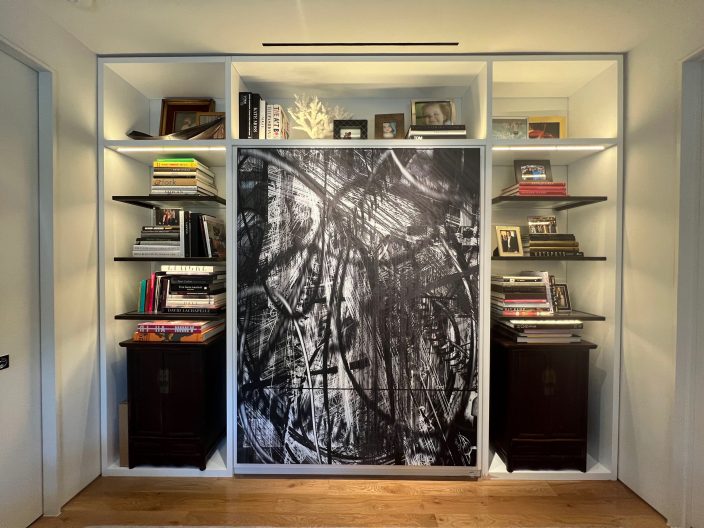 So when a client with a New York studio apartment challenged her to create a space where he could eat, sleep, live and work, Topjian designed a Murphy bed built into custom hardwood shelving, giving the compact living space plenty of storage and flexibility.

And the appeal of Murphy beds is moving beyond those who live in apartments. As the pandemic lingers, even people with larger homes are facing “small-space living issues,” says Heather Higgins, another New Jersey interior designer.

Whether elderly relatives are moving in or adult children are returning home, many people are puzzling over how to add extra sleeping space to existing rooms. Depending on the circumstances, a Murphy bed can be the solution. 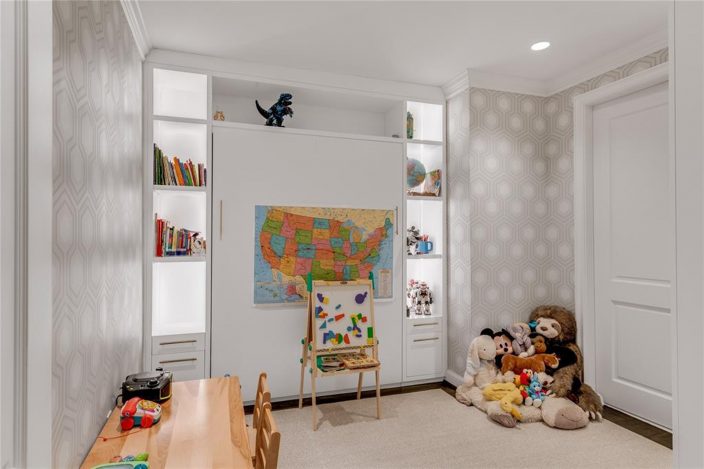 Among its best uses:

MAKING GUESTS AT HOME — WITHOUT SACRIFICING A ROOM

Interior designer Gonzalo Bueno has a meticulously planned home office in Dallas. Behind his desk, a dramatic black-and-white painting extends from floor to ceiling, flanked on both sides by built-in shelving. 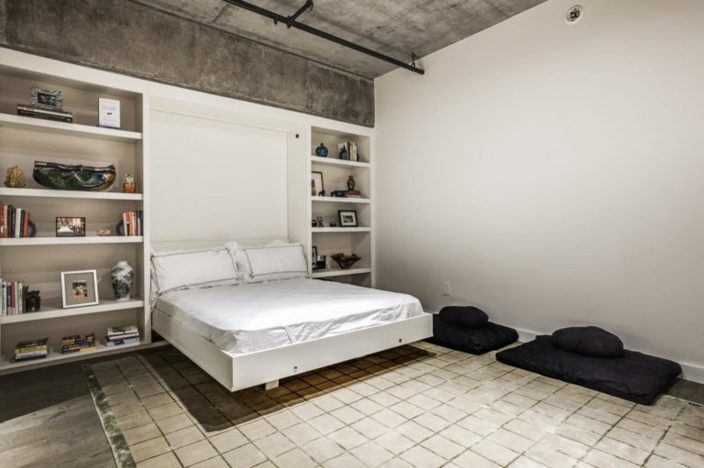 For 90% of the year, he says, his office is laid out in exactly this way. But when relatives visit from Mexico, his desk is moved forward and that painting is pulled down to reveal a Murphy bed.

It’s a better option than even the highest quality sofabed, he says: “This is a queen-size bed — a real bed. So it’s heaven” for visitors. “But for my 90% of the year, it just looks like a beautiful built-in with an art piece.”

Bueno created a similar design for clients who needed a playroom for their children and a guest room for visiting grandparents. They didn’t want older relatives sleeping on a sofa bed, but also didn’t want to lose an entire room to a queen-size bed. One end of their playroom now houses a Murphy bed concealed within built-in storage. 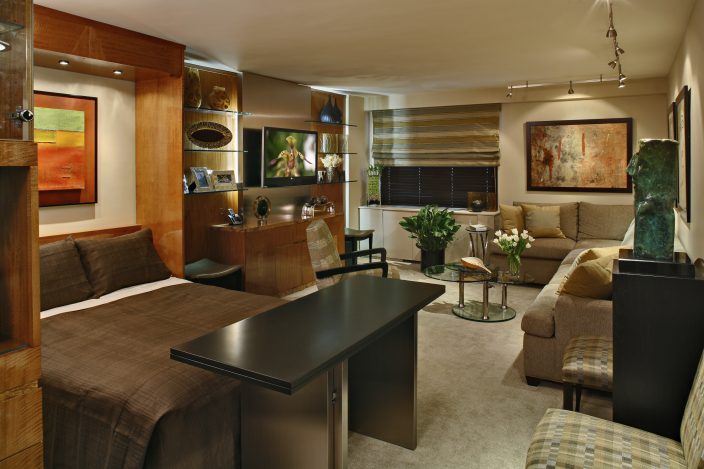 Murphy beds can also be practical for single parents whose children don’t live with them full-time. Bueno has a client who uses a spare bedroom primarily as a meditation space. But when his child lives with him, a Murphy bed is kept open and the room feels entirely like a bedroom.

Higgins says the pandemic is inspiring some city dwellers to shift to a smaller apartment so they can afford a second space outside the city. In cases like this, a Murphy bed can make the city space more manageable. 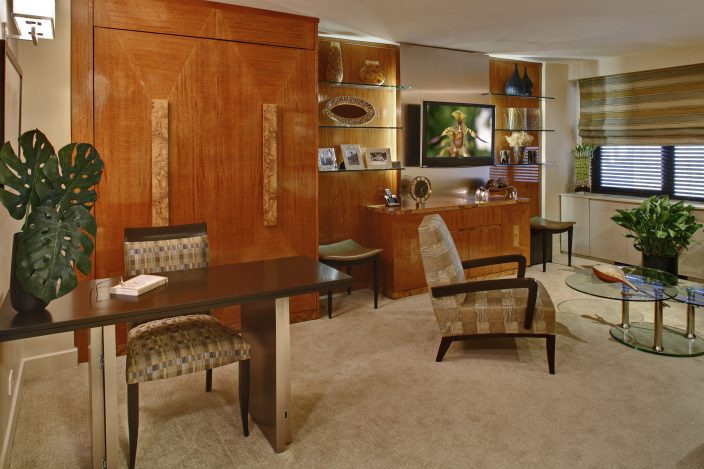 Topjian recommends mapping out the room with the bed open to make sure it won’t feel too crowded. Make sure any furniture you’ll need to shift out of the way isn't too heavy or awkward.

If you’ll be using a Murphy bed as your primary sleeping space and opening it frequently, it helps to choose a lightweight memory foam mattress rather than a conventional model. And look for a good-quality one that lowers slowly and “makes a soft landing,” Topjian says.

Make sure your Murphy bed comes from a reliable manufacturer, the designers emphasized. The name was once trademarked, but has been used by a wide range of retailers since 1989. 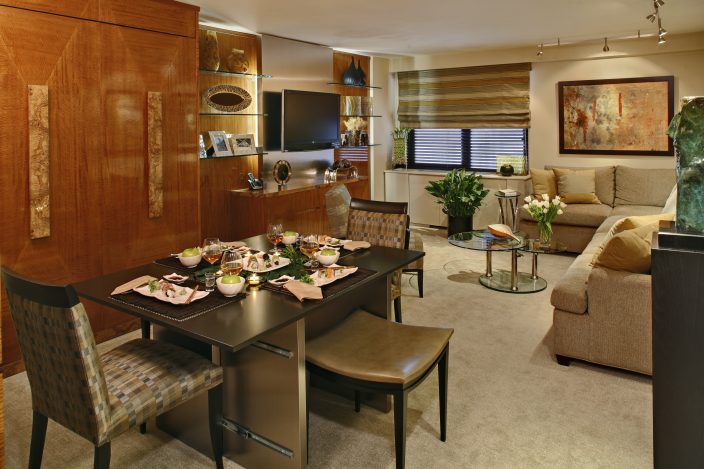 HOME OFFICE IN A SPARE BEDROOM

For those who have converted a spare bedroom into a work-from-home office, it can be challenging to create a space that looks professional on video calls while still keeping a bed there.

“People are paying a lot of attention to what their background is” on video calls, Yip says. “That little portion of your living environment that you’re sharing now with the rest of the world -- what does it say?”

A Murphy bed can offer the elegant appearance of wooden doors, rather than a view of a bed laden with pillows and blankets.

Beyond creating a work-friendly Zoom background, that can also help you concentrate.

“You wouldn’t want to be working all day seeing a bed next to you,” Bueno says. “It will just be too too tempting.”