Two of the biggest names left in the tournament — Rafael Nadal and Ash Barty — play their quarterfinal matches at Melbourne Park. Nadal’s opponent will be Denis Shapovalov, who surprised himself when he beat third-seeded Alexander Zverev in straight sets. The 22-year-old Canadian has reached the last eight at a Grand Slam for a third time, less than a month after a positive COVID-19 test on arrival in Australia threw his preparation into disarray. “I’m just really happy with where I am in terms of my game, in terms of the level, right now,” Shapovalov said. He’ll have a tough opponent in Nadal, who is playing in his 14th Australian Open quarterfinal. Nadal is trying to break a three-way tie for most men's major singles titles with Novak Djokovic and Roger Federer and win his 21st. In the other men's quarterfinal, 17th-seeded Gael Monfils will play Wimbledon finalist Matteo Berrettini. Barty will play American Jessica Pegula for a place in the women's semifinals. She's hoping to break a 44-year drought for Aussie women at the Australian Open by winning the singles title. In the other quarterfinal, French Open champion Barbora Krejcikova will play another American, Madison Keys. Krejcikova beat two-time former champion Victoria Azarenka in the fourth round while Keys beat Paula Badosa. Keys and Krejcikova will begin the day program on Rod Laver Arena. 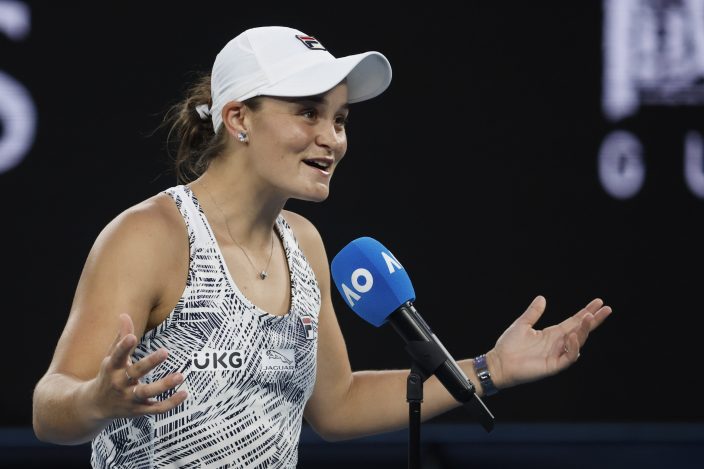 Ash Barty of Australia gestures as she is interviewed following her win over Amanda Anisimova of the U.S. in their fourth round match at the Australian Open tennis championships in Melbourne, Australia, Sunday, Jan. 23, 2022. (AP PhotoHamish Blair)

63 — the number of Grand Slam tournaments it took for Cornet to reach the quarterfinals.

QUOTE OF THE DAY:

“To be in my first quarterfinal, it’s a dream come true. The journey goes on. I still can’t believe it." Cornet.