Lebanon’s former Prime Minister Saad Hariri announced Monday he was suspending his work in politics and will not run in parliamentary elections scheduled in May. The decision marks the first time in three decades that the powerful Sunni family is out of politics and comes as Lebanon is in the throes of a financial meltdown.

Hariri’s decision came after Saudi Arabia, once his main backer and the country where the Hariri family made much of its fortune, has distanced itself from the 51-year-old politician.

Hariri, a three-time prime minister and current member of parliament, inherited the political leadership from his late father, billionaire businessman Rafik Hariri, who was one of Lebanon’s most powerful and influential politicians after the end of the 1975-90 civil war. The late Hariri was assassinated in February 2005 in a massive truck bomb in Beirut. Afterward, the family chose Saad Hariri to lead the family despite the fact that he has an older brother. 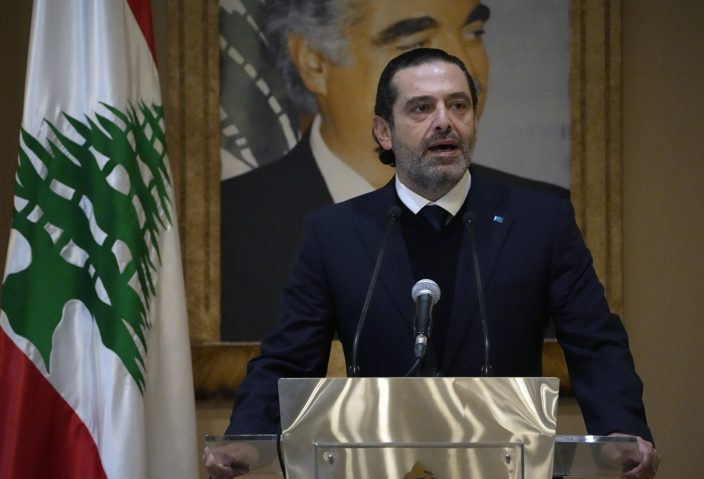 Former Lebanese Prime Minister Saad Hariri speaks during a press conference in front of a picture of his late father and former Prime Minister of Lebanon Rafic Hariri, at his house in downtown Beirut, Lebanon, Monday, Jan. 24, 2022. Hariri said Monday he is suspending his work in politics and will not run in May’s parliamentary elections. (AP PhotoHussein Malla)

Hariri said he now sees that Lebanon does not have the chance for a positive future with Iran’s growing influence in Lebanon, internal divisions, rising sectarian sentiments and the dysfunction of the state.

Hariri acknowledged he had failed to prevent Lebanon from falling into the worst economic crisis in its modern history. He added that he did all he can to prevent civil war in Lebanon by compromising, an apparent reference to forming governments that included the powerful Hezbollah group.

“Therefore, I declare that that I will suspend my work in political life and I call upon my family in the Future Movement to take the same step,” Hariri said, in reference to his political group. He held back tears as he spoke and vowed to continue to help people in need.

He added that he will not run in parliamentary elections neither will members of his Future Movement.

In 2020, a U.N.-backed tribunal sentenced a member of the Hezbollah militant group to life imprisonment for his involvement in Rafik Hariri’s assassination. Hezbollah denies the charges.

Hariri has been the most powerful Sunni Muslim politician in Lebanon since 2005. He took the post of prime minister three times until he was forced to resign in October 2019 following mass protests against the country’s ruling class after the government imposed a $6 monthly fee for using WhatsApp voice calls.

In 2017 when he was prime minister, Riyadh forced him to announce his resignation during a visit to the kingdom, citing Hezbollah’s domination in a televised statement. The dramatic move backfired: Hariri returned home and restored his alliance with Hezbollah, losing Saudi backing.

Hariri’s decision came despite the fact that several prominent politicians including Parliament Speaker Nabih Berri and Druze leader Walid Joumblatt tried to convince him to change his made.

Many in Lebanon fear that the abstention of the moderate Hariri to run could bring hardline Sunni politicians to play in bigger role in Lebanese politics.