While making biscuits and meatloaf at a fast-food restaurant during the coronavirus pandemic, 64-year-old Cynthia Nicholson often thinks back to her husband’s coal mining days in West Virginia.

In that job and in his time as a pipefitter, she said, the work was grueling and sometimes dangerous — but there were standards for safety, working conditions and wages, and people felt they were treated fairly. She said that was because he belonged to unions.

At Tudor’s Biscuit World in Elkview, a franchise of a regional chain that serves comfort food, Nicholson says workers have no such protection. With the coronavirus surging, she doesn't feel safe. 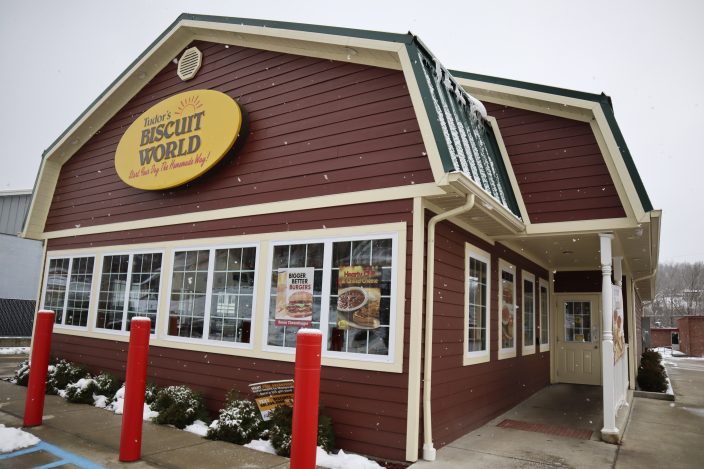 This Jan. 20, 2022 photo shows the Tudor's Biscuit World in Elkview, W.Va. Employees at the Elkview, W.Va., restaurant have already case ballots to decide whether or not they want to create a union. The votes will be read Tuesday. (AP PhotoLeah M. Willingham)

So, a few months ago she did the only thing that makes sense to her: She reached out to her late husband's union friends and asked for help. On Tuesday, after months of organizing, National Labor Relations Board officials will count votes cast by some of the franchise's roughly two dozen workers to find out if it will become the first unionized fast-food restaurant in the state.

The push for a union in this mountain town of fewer than 2,000 people echoes a larger national movement of organizing among retail and food service workers. In a business where workers have routinely been asked to stay on the job and interact with the public during the pandemic, they hope forming a union will give them more say in how they are treated.

The effort also resonates deeply in a state with a storied history of labor activism, coming 100 years after the largest worker uprising in U.S. history erupted in West Virginia coal country. 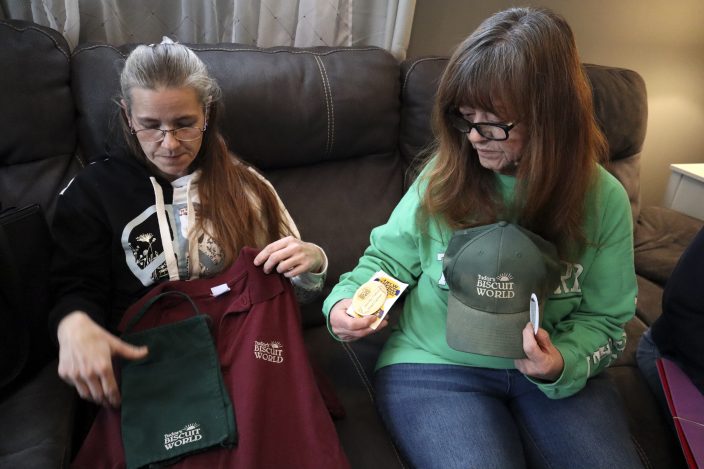 Former Tudor's Biscuit World employee Jennifer Patton, left, and current employee Cynthia Nicholson, right, show off their Tudor's Biscuit World uniforms and United Food & Commercial Workers Local 400 union stickers during an interview at Nicholson's Elkview, W.Va. home on Jan. 20, 2022. Patton said she was retaliated against and fired by management after she joined efforts to unionize the restaurant. Employees at the Elkview, W.Va., restaurant have already case ballots to decide whether or not they want to create a union. The votes will be read Tuesday. (AP PhotoLeah M. Willingham)

“We’re tired of being treated as badly as we’re being treated,” Nicholson said. “The workers are treated with no dignity, no respect, like they’re just a number.”

The vice president of Tudor's Biscuit World did not respond to a voicemail or text message from The Associated Press, and no one from the chain's corporate offices responded to phone calls.

Relatively unknown outside the region, Tudor's Biscuit World is a staple of West Virginia: a must-stop eatery where diners can get made-from-scratch biscuits doused in gravy; country-fried steak and sandwiches including the Miner or the Mountaineer. Founded in Charleston in 1980, the chain now has more than 70 locations, mostly in West Virginia and in parts of neighboring states Ohio and Kentucky.

Former Tudor's Biscuit World employee Jennifer Patton hold stickers displaying the logo of the United Food & Commercial Workers Local 400 union at her coworker's home in Elkview, W.Va., on Jan. 20, 2022. Patton said she was retaliated against and fired by management after she joined efforts to unionize the restaurant. Employees at the Elkview, W.Va., restaurant have already case ballots to decide whether or not they want to create a union. The votes will be read Tuesday. (AP PhotoLeah M. Willingham)

In one sense, the Elkview franchise, located off winding roads, is far removed from the West Virginia coal mines where men and women once stood in the vanguard of the American labor movement. In another, the connection is visceral.

Workers here feel connected to the state’s labor history in their bones, bonded by blood to men and women who saw the value of organizing for safer conditions and better pay in their own lives. Unions have been weakened considerably over the years, but many West Virginians remember a father, a husband or some other relative who once held a union job, and they witnessed the power of banding together.

“Workers across sectors are saying, ‘We are living through a moment in time where it’s making you wonder: Do you want to do this particular job because you could get sick and or die from it?’” he said. “In the early 20th century, it was the coal mine and lack of regulations and now it’s COVID.”

A century ago, concerns over safety and quality of life drew workers to Blair Mountain, where armed miners were subdued by government officials and at least 16 men died. It was a setback for the labor movement at the time, but union membership in the state reached a peak in the decades following the battle. In the 1940s and 1950s, roughly half of West Virginia workers were employed in heavy industries such as coal, steel and glass, and the majority of those workers belonged to a union.

By 2021, however, only 10.5% of West Virginia workers were represented by unions, according to U.S. Department of Labor statistics released last week.

Nicholson is a retired dental assistant who lives in Elkview. She started working at Tudor’s about a year ago, earning $9 an hour as a prep cook for extra income after her husband died of cancer.

She saw things that worried her immediately. After an employee tested positive for COVID-19, the restaurant's employees were never informed, she said. When one of her coworkers questioned the store’s COVID policy, Nicholson said, she started getting her hours cut. Employees often had to work past their scheduled hours to cover shifts and then were reprimanded for working overtime, she said.

Nicholson also alleges that she and other employees were shorted on their paychecks and charged hundreds of dollars for meals at work they never ate.

“The belittling that goes on astonished me,” she said, adding that in her previous job as a dental assistant, "You weren’t allowed to act like that.”

Nicholson reached out to one of the unions her husband had belonged to: the Plumbers & Pipefitters Local 625, based in the capital of Charleston. Union officials there connected her with the United Food & Commercial Workers Local 400, which represents 35,000 workers across six states and Washington, D.C.

When a majority of the workers at Tudor’s Elkview franchise signed authorization cards, Nicholson said, there was a lot of excitement. They hosted rallies where people held signs saying, “We love union biscuits.”

But soon the temperature changed. Employees started worrying that they could lose their jobs or have their hours cut. Nicholson said she was written up for small things, something that hadn't happened before.

Former Tudor’s head cashier Jennifer Patton, 38, said she was afraid of joining a union at first, but felt more comfortable after talking to her father-in-law, who was a union man.

She signed on after she found out that an employee she had been riding with to another Tudor’s location had tested positive for COVID-19 and she hadn’t been told.

Her decision had consequences: In the months that followed, she said, she was suspended multiple times even though she had never been disciplined previously and had even been promoted. Her bosses then took away her security clearance to work cashiers. Last week, she was fired.

Patton’s son just started his first year of college. She said paying for her son’s education is important to her.

“Me and my husband work every day, as many hours as we possibly can, and we still struggle," she said. "Nobody deserves to be talked to and treated the way we are.”

Thompson, whose ex-husband belonged to a union as a strip miner, hopes enough workers feel the connection to the state's past to tip the balance in favor of a collective bargaining unit now.

“Unions protected our family members, so many workers in this state’s history,” Nicholson said. “We need that protection at Tudor’s.”