Adam Fox scored the deciding goal in the sixth round of a shootout and the New York Rangers beat the Los Angeles Kings 3-2 on Monday night for their ninth win in 12 games.

Chris Kreider got his NHL-leading 30th goal, Barclay Goodrow also scored and Artemi Panarin had two assists as New York won its fifth straight at home. Igor Shesterkin stopped 28 shots to pick up his 20th win of the season.

Blake Lizotte and Alex Iafallo scored in the second period for Los Angeles. Jonathan Quick stopped 34 shots as the Kings lost for the fourth time in five games. 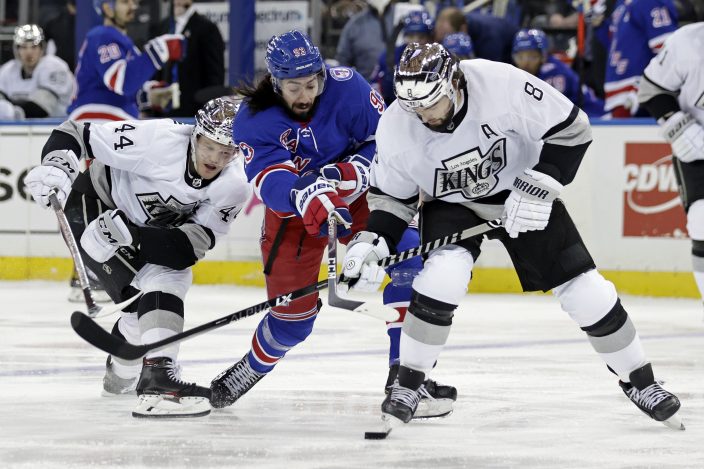 Los Angeles' Anze Kopitar and Panarin scored in the third round of the tiebreaker, and Kings rookie Quinton Byfield and New York's Alexis Lafreniere converted in the fifth round. After Shesterkin denied Arthur Kaliyev in the sixth round, Fox roofed a slick backhand that stuck in the net to win it.

The Rangers began overtime on a power play that carried over from the third period. After Kempe came out of the penalty box 46 seconds into the extra period, the teams played 4-on-4 for the rest of an overtime that had no whistles. New York had five shots and Los Angeles two in the period.

Shesterkin made a stellar save on Trevor Moore's breakaway 7 1/2 minutes into the third to keep Los Angeles' lead at 2-1. 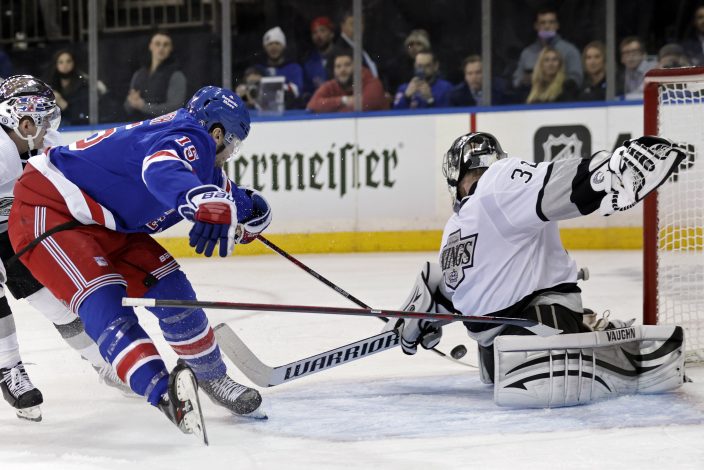 Goodrow tied it when he deflected Panarin's point shot from the left side for his eighth with 5:45 left in regulation.

Quick made an acrobatic glove save on Jacob Trouba at 7:09 of the second to keep the Kings down 1-0.

Lizotte tied it with 8:05 remaining in the middle period. After a turnover by the Rangers in their offensive zone, Lizotte rushed the puck up the ice and fired a shot over Shesterkin's right shoulder for his sixth. It came on Los Angeles' 19th shot on goal of the game. 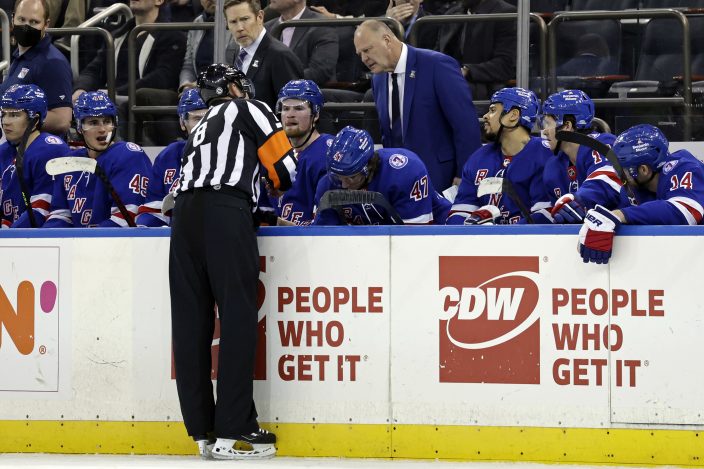 Panarin nearly regained the lead for New York with 1:34 left in the period as he brought the puck up the right side, got around Mikey Anderson and put a backhand past Quick that went off the crossbar. Panarin thought he had scored and raised his stick as he skated to the left, but play continued.

With the Kings on the power play after Goodrow's double-minor, Iafallo put Los Angeles ahead as he took a pass from Kopitar in front and backhanded it past Shesterkin for his 13th with 39 seconds to go in the second.

The Kings, who entered third in the NHL in shots on goal, controlled play for most of the opening period, outshooting the Rangers 11-3. 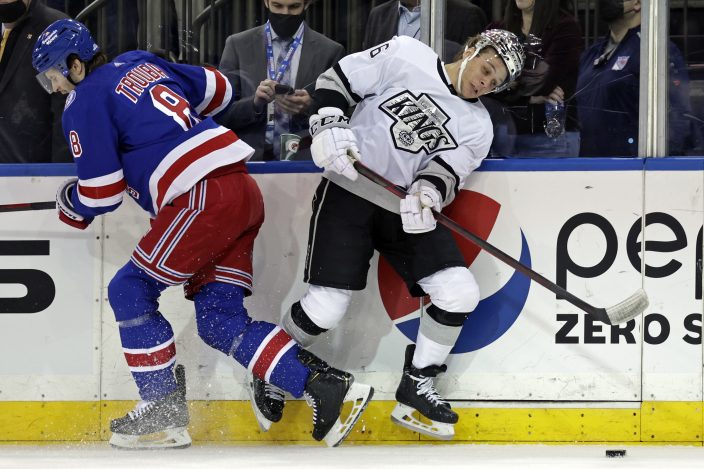 Tempers flared after former Ranger Brendan Lemieux delivered a hard hit from behind on Ryan Lindgren into the end boards to the left of the New York net. As several Rangers approached Lemieux, Lindgren got up and skated into Lemieux, earning a two-minute penalty for cross-checking. Lemieux was given a five-minute major for boarding and a game misconduct, resulting in his ejection.

After the teams skated 4-on-4 for two minutes, the Rangers went on the power play. Quick stopped Kreider's wrist shot from the right doorstep with 43 seconds left in the period on New York's second shot on goal of the period.

With time winding down, Kreider — who had his fifth career hat trick in Saturday's win against Arizona — got the Rangers on the scoreboard as he deflected Fox's pass in front with two seconds remaining in the first. It was Kreider's league-best 15th goal on the power play. 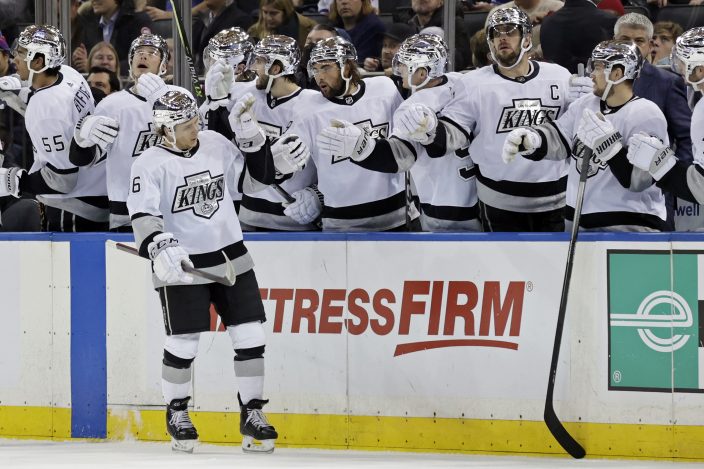 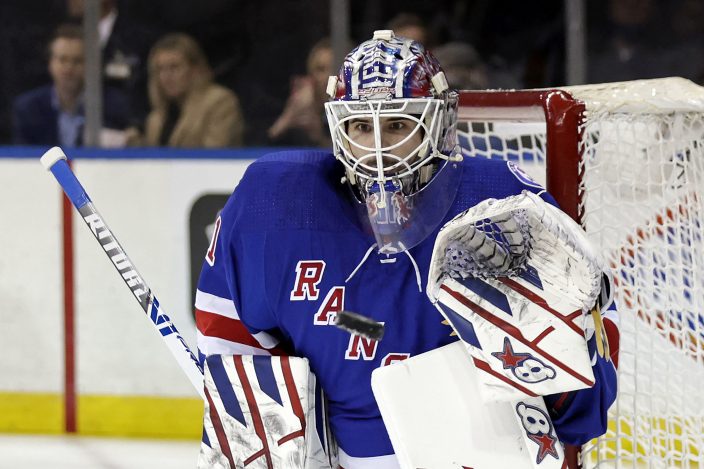 Kings: At the New York Islanders on Thursday night.

Rangers: At Columbus on Thursday night before playing nine of the next 11 at home. 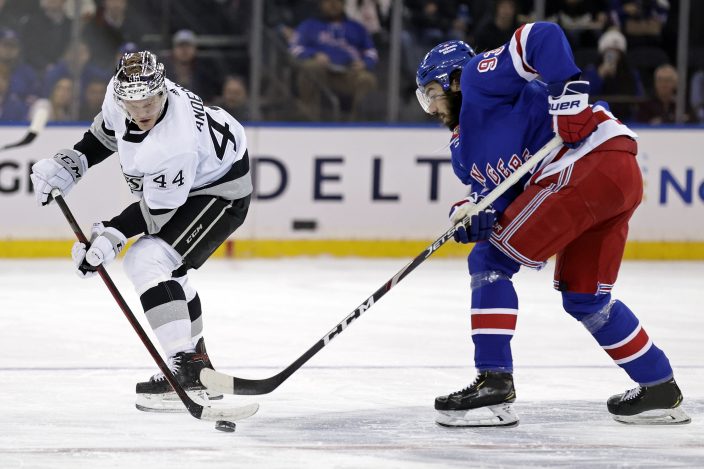