The 2008 Beijing Summer Olympics showcased China's reemergence on the world stage. In awarding those Games to China, the International Olympic Committee predicted the Olympics could improve human rights, and Chinese politicians hinted at the same.

Soaring promises are absent this time as the Beijing Winter Olympics open in just over a week in the midst of a two-year-long pandemic.

The Games are a reminder of China’s rise, but also its disregard for civil liberties, prompting a diplomatic boycott led by the United States, which has called China’s internment of at least 1 million Uyghurs a genocide. 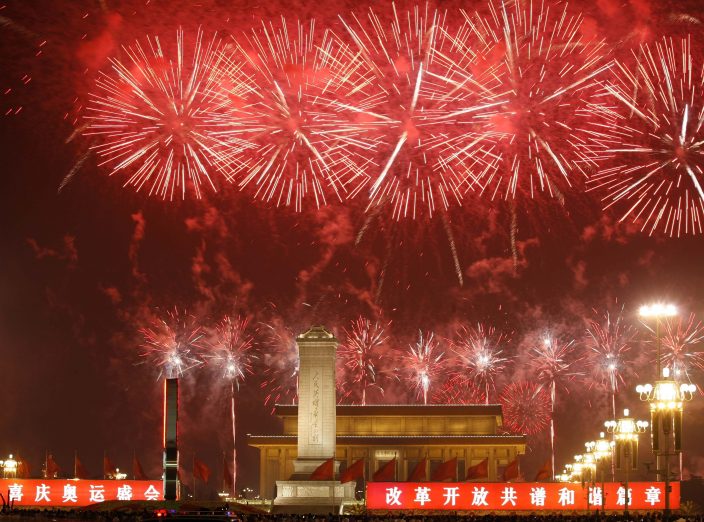 FILE - Fireworks explode over Beijing's Tiananmen Square to help mark the closing of the Beijing 2008 Olympics in Beijing on Aug. 24, 2008. The 2022 Beijing Winter Olympics open in just over a week. When Beijing held the Summer Olympics in 2008 the International Olympic Committee predicted they could improve human rights, and Chinese politicians hinted at the same. There are no soaring promises this time. (AP PhotoVincent Yu, File)

Rights groups have documented forced labor, mass detention and torture, which China calls the “lie of the century.”

With more political, economic, and military clout, China appears to worry less about global scrutiny than it did 13 1/2 years ago. And the pandemic has given it even more control over the Olympics, particularly with the isolation of visiting journalists, separated in a “bubble” from the general Chinese population.

“There’s nothing to ‘prove’ at this point; 2008 was a ‘coming out’ party and all this one does is confirm what we’ve known for the last decade,” Amanda Shuman, a China researcher at the University of Freiburg, wrote in an email to The Associated Press. 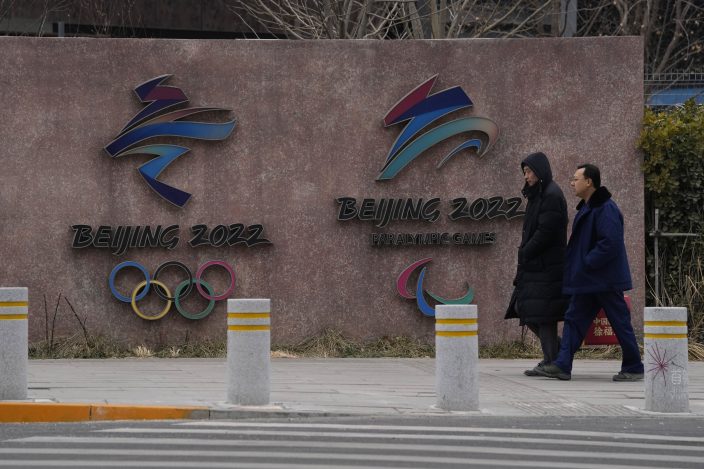 FILE - Workers walk past the logos for the Beijing Winter Olympics and Paralympics displayed at Shougang Park in iBeijing, China on Jan. 21, 2022. The 2022 Beijing Winter Olympics open in just over a week. When Beijing held the Summer Olympics in 2008 the International Olympic Committee predicted they could improve human rights, and Chinese politicians hinted at the same. There are no soaring promises this time. (AP PhotoNg Han Guan, File)

“If anything, there’s a lot less pressure than 2008,” she said. “The Chinese government knows full well that its global economic upper hand allows it to do whatever it wishes.”

The IOC had few options when it awarded China the Games or the second time. Six possible European candidates, led by Norway and Sweden, bowed out for political or cost reasons. Voters in two other countries — Switzerland and Germany — voted “no” in referendums.

IOC members eventually picked Beijing over Almaty, Kazakhstan, in a close vote — 44-40. The result came on paper ballots after the IOC said there was an electronic glitch in the first vote. Beijing becomes the first city to host both the Summer and Winter Games. 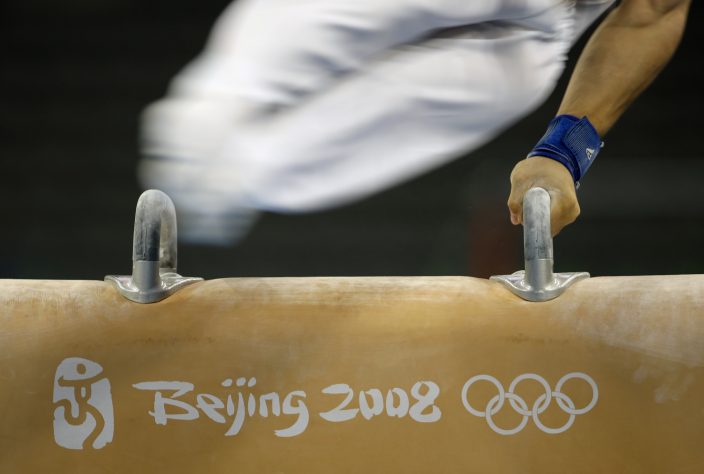 FILE - A gymnast performs at the pommel horse during a podium training at the Beijing 2008 Olympics in Beijing on Aug. 6, 2008. The 2022 Beijing Winter Olympics open in just over a week. When Beijing held the Summer Olympics in 2008 the International Olympic Committee predicted they could improve human rights, and Chinese politicians hinted at the same. There are no soaring promises this time. (AP PhotoOdd Andersen, File)

As for Kazakhstan, it was hit this month on the eve of the Olympics with massive protests and political unrest.

The IOC has allowed China to avoid human rights oversight. Beginning with the 2024 Paris Olympics, cities must adhere to the United Nations Guiding Principles on Business and Human Rights. However, China was not subjected to those rules when it was picked in 2015.

FILE - A Tibetan exile looks out from a tent at a protest rally to mark the end of the Beijing Olympics in New Delhi, India on Aug. 24, 2008. The 2022 Beijing Winter Olympics open in just over a week. When Beijing held the Summer Olympics in 2008 the International Olympic Committee predicted they could improve human rights, and Chinese politicians hinted at the same. There are no soaring promises this time. (AP PhotoMustafa Quraishi, File)

“When China hosts the Olympics again, it is no longer the China back in 2008,” Ai Weiwei, China’s famous dissident artist, wrote in an email to The AP. Ai helped design the famous Bird’s Nest stadium — hoping it would signify a new openness — and then regretted doing so, calling it and the Olympics China’s “fake smile.”

Ai was jailed in 2011 in China on unspecified charges and how lives in exile in Portugal. The Bird’s Nest will again host the opening ceremony on Feb. 4.

“China today has deviated further away from democracy, freedom of press and human rights, and the reality has become even harsher," Ai added.

Here are some examples of how China's tone has toughened.

In 2008, Beijing put some curbs on broadcasting from Tiananmen Square but allowed it; agreed to “protest zones," although they were never used with access repeatedly denied; and dropped some reporting restrictions more than a year ahead of the Games. It also unblocked its censored internet for journalists.

In 2022, there is less accommodation. The pandemic will limit journalists to a tightly sealed “bubble,” though there will be internet access. Chinese organizers have warned foreign athletes that any statement that goes against Chinese laws could be punished, and a smartphone app widely used by athletes and reporters has glaring security vulnerabilities, according to an internet watchdog.

Some national Olympic committees have advised teams and staff not to take personal phones or laptops to Beijing. The IOC, which generates billions from sponsorships and broadcast rights, seldom pushes back in public against Chinese organizers who are, in reality, the Chinese government.

Changes that affect 2022 began a month after the 2008 Olympics ended when the global financial crisis hit world economies. China fared better than most, which — coupled with the Olympics — increased its confidence. This also coincides with the rise of Xi Jinping, who headed the 2008 Olympics and was named General Secretary of the Chinese Communist Party in 2012.

“Although Xi was in charge of 2008 Olympic Games, the Winter Games is truly Xi's Games,” said Xu Guoqi, who teaches history at the University of Hong Kong. He is the author of “Olympic Dreams: China and Sports, 1895-2008."

Mary Gallagher, director of the Center for Chinese Studies at the University of Michigan, said the state of U.S. democracy and its “poor pandemic response” has further emboldened China.

“Right now the multiple U.S. failures create momentum for renewed nationalism and confidence in China,” Gallagher said by email. “This is made all the more effective by the Communist Party’s strict control over information, which can rain ‘positive energy’ down on what’s happening in China while only publicizing negative accounts of other countries, especially the U.S.”

China complained in 2008 that human rights protests around Tibet politicized the Olympics. The Olympic Torch Relay, taken on a world tour, faced violent protests in London and elsewhere. The IOC has not tried such a relay since, and then-President Jacques Rogge said the protests put the Beijing Olympics in “crisis.”

China again says the Olympics are only about sports, a shield the IOC's Bach also uses against critics. China says mixing in politics goes against the Olympic Charter, although China itself dabbled in politics by boycotting the 1980 Moscow Olympics.

“Sports and politics do mix,” Laura Luehrmann, a China specialist at Wright State University, said in an email. “Politics is about the distribution and use of limited resources — most notably power and decision-making, but also finances as well. Sports is all about power and money — even if framed as glorifying athletic achievement.”

Victor Cha, who served in the White House under President George W. Bush and is the author of “Beyond the Final Score — The Politics of Sport in Asia,” said China moaning about others politicizing sports was “the pot calling the kettle black.”

“There is no country that has ignored the Olympic Charter’s mandate to keep politics out of sports more than China," Cha, who teaches at Georgetown University, wrote in an essay last week for the Center for Strategic & International Studies.

“Much as the world would like the Olympics to be devoid of politics, as George Orwell once wrote: ‘Sport is war minus the shooting.’”

AP Sports Writer Stephen Wade reported for The Associated Press from Beijing for 2 1/2 years in the run-up and the follow-up to the 2008 Olympics.