The sight can be jarring during extreme drought: snowmaking guns lined up on a mountainside, blasting precious crystal flakes on a ski run while the rest of the land goes thirsty.

Snowpack in the U.S. West has decreased by about 20% in the last century, making man-made snow more vital each year to opening ski resorts and fueling ski town economies as they head into an uncertain future.

As the effects of drought and climate change increasingly hit home, the ski industry has invested millions of dollars in more efficient snowmaking systems amid questions about whether the practice is a wise use of energy and water. 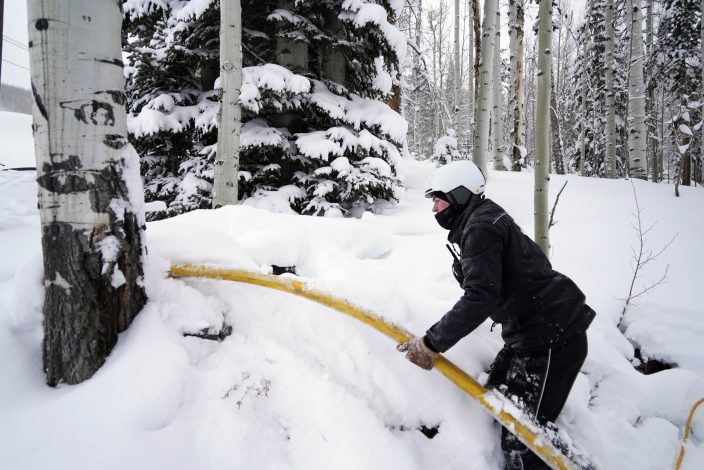 “There are impacts. They're regrettable. We’d rather not have to make snow,” said Auden Schendler, senior vice president of sustainability at Aspen Skiing Company in Colorado. “But our regional economy and the economies of all ski towns depend on your ski resort operating. And so this is a necessary evil."

Snowmaking has been around since at least the 1950s, but the practice became more widespread in the West after a severe drought in the late 1970s. According to the Colorado-based National Ski Areas Association, about 87% of the 337 U.S. alpine resorts the trade group represents have snowmaking capabilities.

Many resorts draw water from nearby streams or reservoirs and typically use compressed air and electricity to blow snow into piles on the slopes when it's cold. Those piles are then spread into a base layer that allows resorts to open in the early winter and to stay open through the spring. 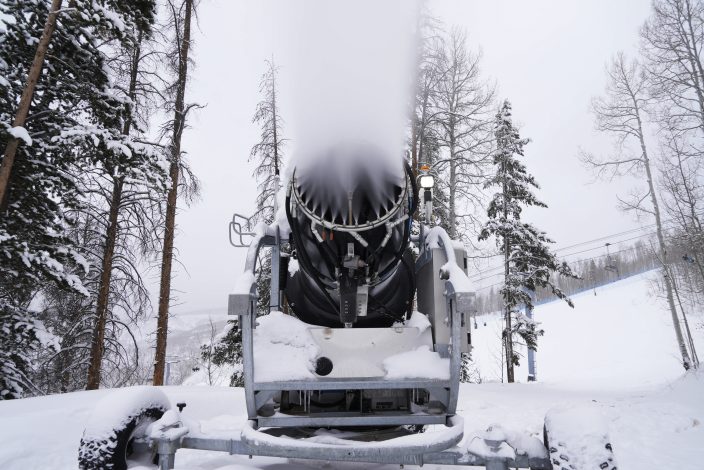 An analysis of most of the ski resorts in Colorado found snowmaking diverts about 1.5 billion gallons (6.8 billion liters) of water per year in the state, said Kevin Rein, state engineer and director of the Colorado Division of Water Resources. That's enough to fill about 2,200 Olympic-sized swimming pools.

It sounds like a lot, but Rein said snowmaking accounts for less than one-tenth of 1% of the water that is diverted in the state, with agriculture drawing about 85%. Moreover, about 80% of the water used in snowmaking returns to the watershed when the snow melts in the spring.

Snowmaking is recognized by the courts as a “beneficial use” in Colorado, said Rein, whose agency regulates the process. “It’s part of our tourism, it’s part of what we do in Colorado.” 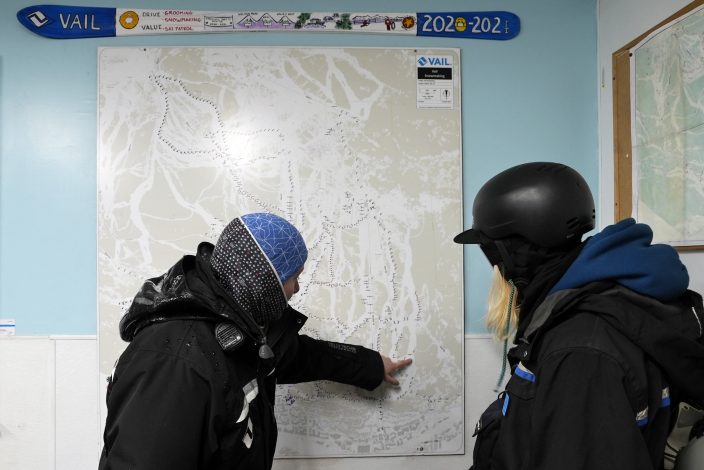 But Patrick Belmont, a professor and head of the Department of Watershed Sciences at Utah State University, said it's important to note that a lot energy is used during snowmaking, and a lot of water is lost through evaporation and sublimation.

“It’s not insignificant, especially in a place where we don’t have a whole lot of water to begin with. ... Every drop of water matters,” he said.

Belmont, an avid skier who recently published a wide-ranging study on snowmaking and climate change, also is concerned that man-made snow, which is denser and melts later than the real thing, can affect stream flows.

"There are a lot of fish that take their cues for things like when to spawn or when to do different things in their life based on how the flows are going up or down. So we’re changing those types of natural cues for some of those organisms,” he said.

Ski resorts have made huge strides in becoming more efficient and environmentally friendly, said Schendler, of the Aspen Skiing Company. But he also recalled a time when they often didn't pay much attention to weather forecasts, only to see the fruits of their labor melt in the warm afternoon sun.

“One way the industry has gotten smarter is they said, ‘Look, we’re not going to make snow if it’s not cold and if there’s not a forecast for it to stay cold," he said. "That sounds dumb and analog, but this industry is historically very analog."

Many resorts also have invested heavily in recent years to upgrade their snowmaking operations. Some have dug storage ponds to collect water in the spring when it's abundant, while a few are eying the use of reclaimed wastewater.

Colorado-based Vail Resorts, which owns 37 ski resorts in the U.S., Canada and Australia, announced during an earnings call in December a $3.6 million investment into its sustainability efforts this year, including making its snowmaking operations more energy efficient.

Over the past few years, the company has upgraded more than 400 snow guns across its resorts to blast more snow with less energy in less time. Meanwhile, Breckenridge, which is owned by Vail Resorts and is one of the country's largest and most popular ski areas, is getting 110 efficient snow guns.

“If I can make all the snow we need in a third the time, that’s a huge energy savings. It’s a huge labor savings," said Kate Schifani, snowmaking manager at Colorado’s Vail Mountain Resort.

Vail's modern snow guns can regulate water output and automatically shut down when the weather gets too warm — a major upgrade from older technology that required workers to monitor the temperature and manually turn off the system.

Besides using water more efficiently, ski areas are tapping more renewable energy to power snow guns, which account for about 20% of a typical resort's energy usage.

Since its inception, the voluntary program has cut emissions by about 129,300 tons (117,300 metric tons), according to the group. Participating resorts also have purchased renewable energy that accounts for an additional reduction of about 242,500 tons (220,000 metric tons) of greenhouse gas emissions. Those are tiny amounts compared to the United States' estimated 6 billion tons (5.4 billion metric tons) of greenhouse gases produced in 2021 — a total of about 32 minutes worth of the country's carbon emissions — according to the independent Rhodium Group.

But advocates say it’s a start.

“We can do what we can in our own operations, but if there’s going to be a future in outdoor recreation and a future for humanity just in general, we’re going to need every kind of solution we can find,” said Adrienne Saia Isaac, an NSAA spokeswoman. “We’ve got to effect change now.”

Schendler, who warns that the ski industry is not on track to be viable beyond 2050, agrees.

“The industry has historically responded to climate change by saying, ‘We’re going to clean our operations, we’re going to do good snowmaking, and we’re going to cut our carbon footprint,’" he said. "That’s awesome and noble and moral and good business, but it is not a solution to a global problem.”

The Associated Press receives support from the Walton Family Foundation for coverage of water and environmental policy. The AP is solely responsible for all content. For all of AP’s environmental coverage, visit https://apnews.com/hub/environment.