Most countries have made little to no progress in bringing down corruption levels over the past decade, and authorities' response to the COVID-19 pandemic in many places has weighed on accountability, a closely watched study by an anti-graft organization found Tuesday.

Transparency International’s 2021 Corruption Perceptions Index, which measures the perception of public sector corruption according to experts and businesspeople, found that “increasingly, rights and checks and balances are being undermined not only in countries with systemic corruption and weak institutions, but also among established democracies.”

Among other issues over the past year, it cited the use of Pegasus software, which has been linked to snooping on human rights activists, journalists and politicians across the globe. 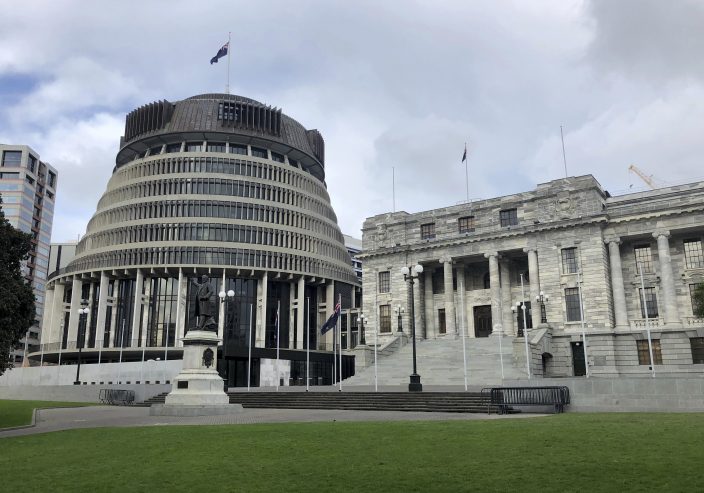 FILE - The New Zealand Parliament buildings, the Beehive on the left, the common name for the Executive Wing of the New Zealand Parliament and Parliament House on the right, in Wellington, New Zealand, Oct. 2017. Denmark, New Zealand and Finland tied for first place in the Transparency International’s 2021 Corruption Perceptions Index, which measures the perception of public sector corruption. The closely watched study finds that most countries have made little to no progress in bringing down corruption levels over the past decade. (AP PhotoMark Baker, File)

The report said the pandemic has “been used in many countries as an excuse to curtail basic freedoms and sidestep important checks and balances.”

In Western Europe, the best-scoring region overall, the pandemic has given countries “an excuse for complacency in anti-corruption efforts as accountability and transparency measures are neglected or even rolled back,” Transparency said. In some Asian countries, it said, COVID-19 “also has been used as an excuse to suppress criticism.” It pointed to increased digital surveillance in some nations and authoritarian approaches in others.

The report ranks countries on a scale from a “highly corrupt” 0 to a “very clean” 100. Denmark, New Zealand and Finland tied for first place with 88 points each; the first two were unchanged, while Finland gained three points. Norway, Singapore, Sweden, Switzerland, the Netherlands, Luxembourg and Germany completed the top 10. The U.K. was 11th with 78.

The United States, which slipped over recent years to hit 67 points in 2020, held that score this time but slipped a couple of places to 27th. Transparency said it dropped out of the top 25 for the first time “as it faces continuous attacks on free and fair elections and an opaque campaign finance system.”

Canada, which slid three points to 74 and two places to 13th, “is seeing increased risks of bribery and corruption in business,” the group said. It added that the publication of the Pandora Papers showed Canada as “a hub for illicit financial flows, fuelling transnational corruption across the region and the world.”

The index rates 180 countries and territories. South Sudan was bottom with 11 points; Somalia, with which it shared last place in 2020, tied this time with Syria for second-to-last with 13. Venezuela followed with 14 — then Yemen, North Korea and Afghanistan tied with 16 apiece.

Transparency said the control of corruption has stagnated or worsened in 86% of the countries it surveyed in the last 10 years. In that time, 23 countries — including the U.S., Canada, Hungary and Poland — have declined significantly in its index, while 25 have improved significantly. They include Estonia, the Seychelles and Armenia.

Compiled since 1995, the index is calculated using 13 different data sources that provide perceptions of public sector corruption from business people and country experts. Sources include the World Bank, the World Economic Forum and private risk and consulting companies.