When LeBron James gets his sixth point on Tuesday during the Los Angeles Lakers' game at Brooklyn, it'll put him up to 36,387 in his career.

Start the countdown. It's no longer be a question of if James will pass Abdul-Jabbar as the NBA’s all-time scoring leader, but when. At his current pace, it’s possible that James may move into the No. 1 spot by this time next season, maybe even a bit earlier. 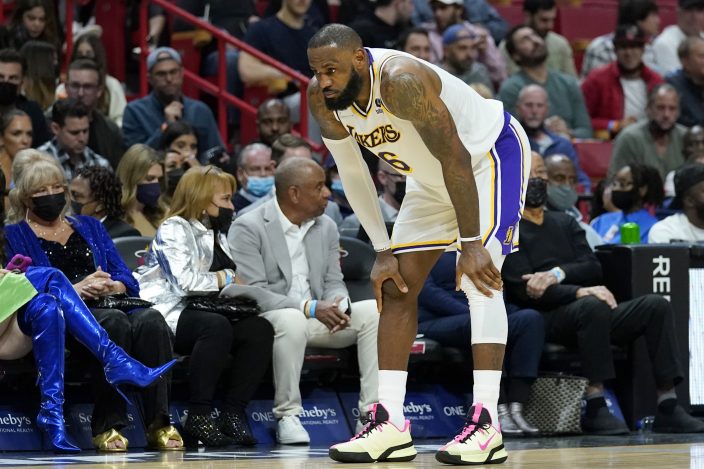 Los Angeles Lakers forward LeBron James (6) takes a break on the court during the second half of an NBA basketball game against the Miami Heat, Sunday, Jan. 23, 2022, in Miami. Miami won 113-107. (AP PhotoLynne Sladky)

“As I’ve continued to climb the ranks, it is natural, human, to look at it and see where you are and see if it’s even possible, see if you’re capable,” James said. 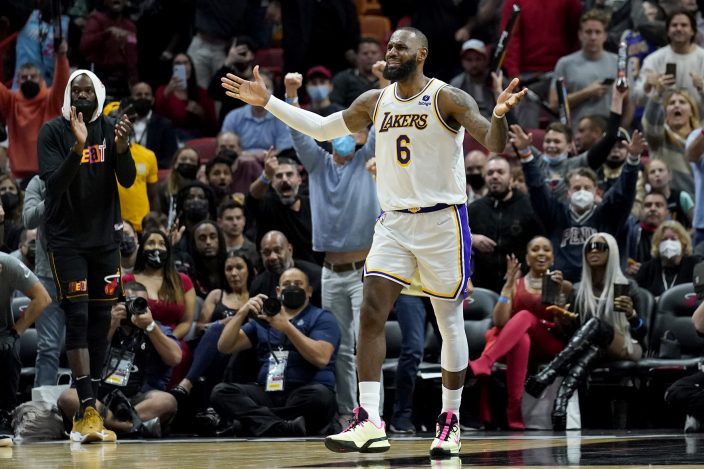 Los Angeles Lakers forward LeBron James (6) reacts to a call during the second half of an NBA basketball game against the Miami Heat, Sunday, Jan. 23, 2022, in Miami. Miami won 113-107. (AP PhotoLynne Sladky)

James is going to get a taste of what it’s like to catch Abdul-Jabbar in the next few games. When talking about official records, such as all-time scoring leaders, the NBA sticks solely to regular-season games and doesn’t add playoff totals to the mix. Add Abdul-Jabbar’s playoff games to his total, and he scored 44,149 points.

James is at 44,012 now. Another four, five, six, seven games at the most is all it will take for James to have scored more points than anyone in NBA history. It won’t be the official record. But on at least one list, James will be No. 1 in scoring very soon.

“He has a skillset that already has been well documented ... a pass-first guy who can lead the league in scoring," said Miami coach Erik Spoelstra, James’ former coach for four NBA Finals trips and two championships with the Heat. 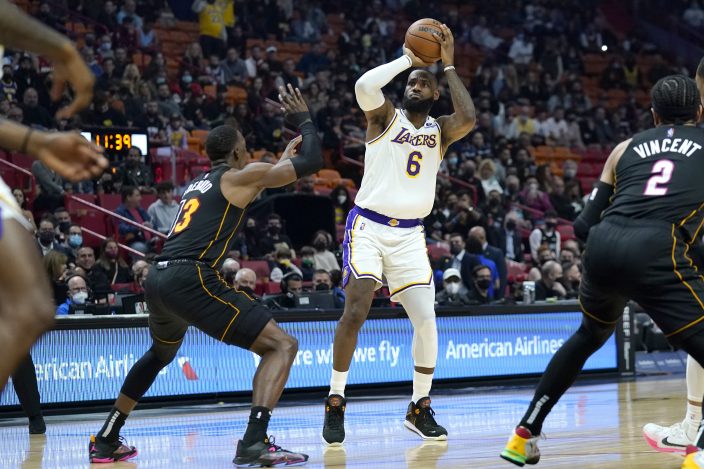 Ah, the passing. Don't overlook that.

James is now 83 assists shy of 10,000 in his career. He’s about to be the first triple-quintuple player in NBA history, the first with at least 10,000 points, 10,000 rebounds and 10,000 assists. He hit the rebound milestone last week; he’ll probably hit the assist milestone sometime between now and the All-Star break. He could have had the scoring record long ago if he had turned down more of those assist opportunities. 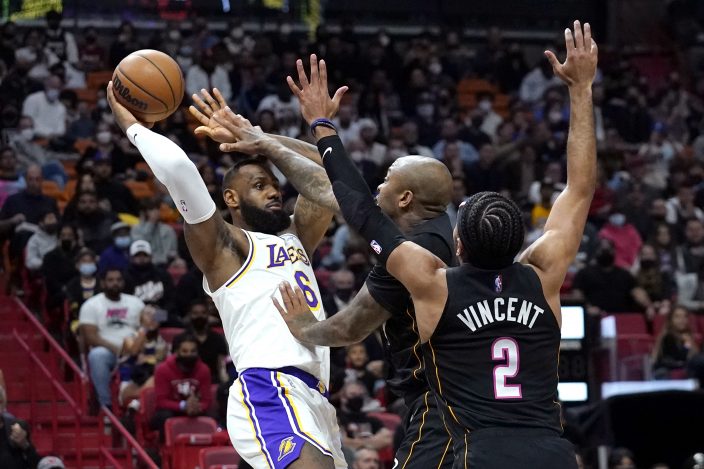 While there may not have been intent, technically, he’s been chasing them since Day 1.

He was tied for 1,157th on the NBA’s all-time scoring list after his rookie season. Moved into the top 500 after three seasons. Cracked the top 250 by Year 5. Was in the top 100 by the eighth season, the top 50 a year after that. By Year 14, he was in the top 10. And Tuesday’s game in Brooklyn will mark exactly two years since he moved into the No. 3 spot on the all-time scoring list by passing Kobe Bryant.

“Continuing to move the game forward (at)KingJames. Much respect my brother,” Bryant tweeted that night, the final one ever sent from his account. 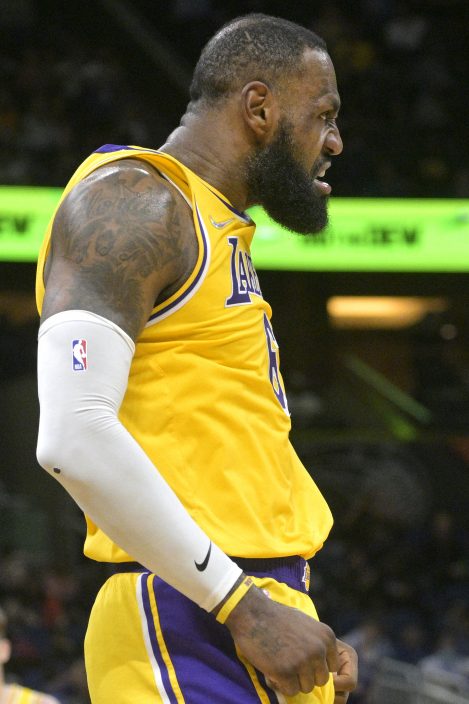 Bryant died the next day in the helicopter crash in which eight others, including his daughter Gianna, perished with him. Bryant played in 1,346 regular-season games. James will play in his 1,346th on Tuesday. 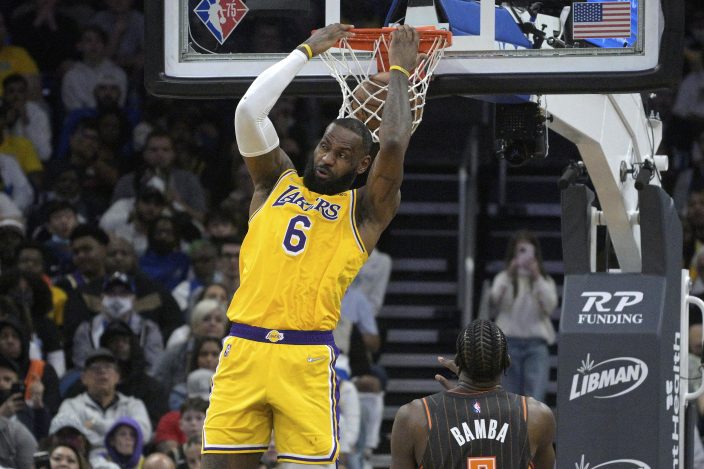 James is the only one on all four.

And this climb up the charts isn’t coming with James, now 37 and in his 19th season, sputtering to the career finish line. He’s putting up MVP-type numbers, at times single-handedly trying to keep the Lakers afloat while they sputtered around the .500 mark and waited for Anthony Davis to return to the lineup. Davis is likely to return Tuesday, after missing 19 of the Lakers' last 21 games. 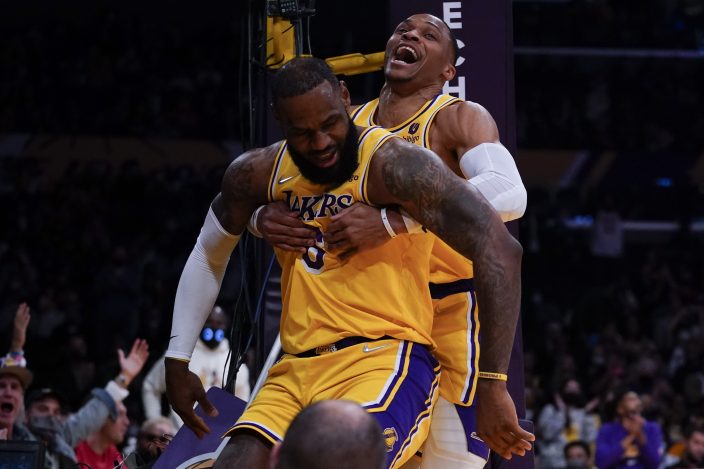 Los Angeles Lakers forward LeBron James (6) is helped off the floor by guard Russell Westbrook, right, during the first half of an NBA basketball game against the Indiana Pacers in Los Angeles, Wednesday, Jan. 19, 2022. (AP PhotoAshley Landis)

James has a current streak of scoring at least 25 points in 17 consecutive games; the only other player, in Year 15 or beyond, to do that is Bryant, who had a 17-game run in the 2012-13 season. James will try to break that tie on Tuesday.

“I don’t need to score 30 a night, but I’m in one of the best zones offensively I’ve been in in my career,” James said. “And I don’t plan on stopping. That’s just how I feel. I feel fantastic.” 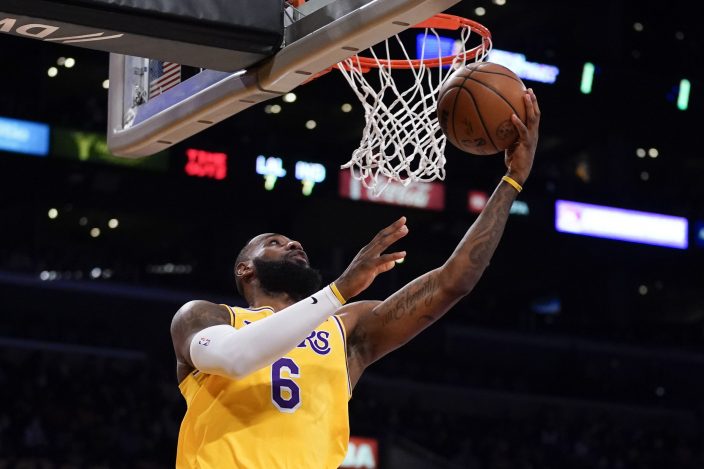 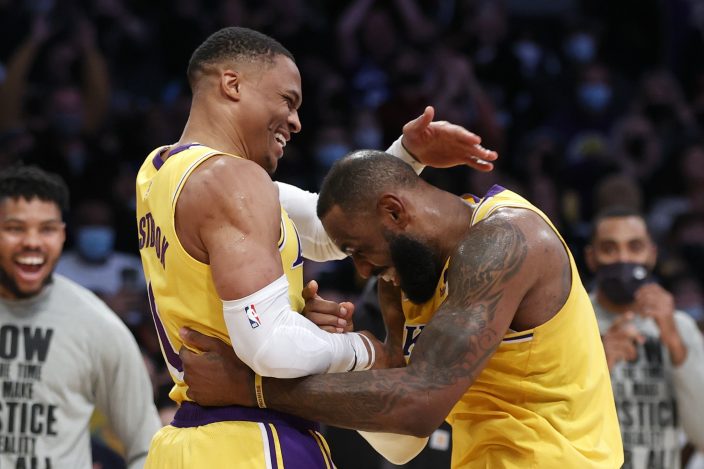 Los Angeles Lakers guard Russell Westbrook, left, is congratulated by forward LeBron James after scoring against the Utah Jazz during the second half of an NBA basketball game in Los Angeles, Monday, Jan. 17, 2022. The Lakers won 101-95. (AP PhotoRingo H.W. Chiu)