Sadio Mané got up from a horrible clash of heads that left him dazed on the ground, possibly with a concussion, to score a goal and help put Senegal into the quarterfinals of the African Cup of Nations on Tuesday.

Senegal won 2-0 against Cape Verde, which had two players sent off in the last 16 game in Cameroon's western city of Bafoussam.

The second red card was dished out to Cape Verde goalkeeper Vozinha when he raced out of his area and tried to head a ball clear with Mané chasing it down. The players' heads clashed badly as they both leaped in the air and Vozinha clearly sustained a concussion as he tried to get up afterward and ended up staggering around. 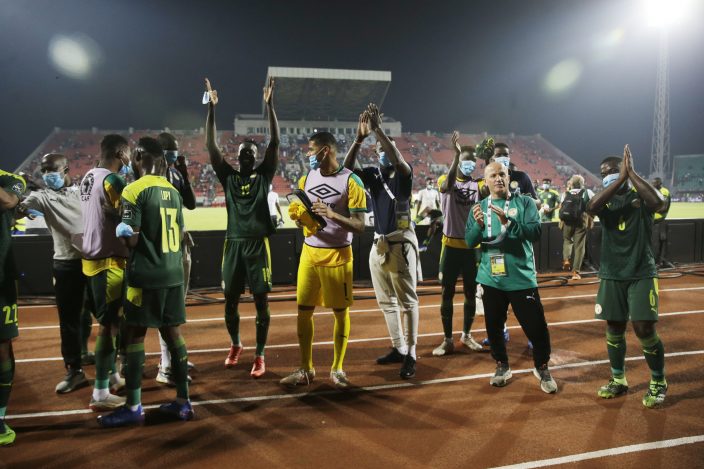 Senegal's Soccer players celebrates at the end of the African Cup of Nations 2022 round of 16 match between Senegal and Cape Verde at Kouekong Stadium, Bafoussam, Cameroon, Tuesday, Jan. 25, 2022. (AP PhotoSunday Alamba)

Vozinha left on a stretcher and wasn't around to see the red card referee Lahlou Benbraham held up for him.

But questions will be raised over Mané being allowed to continue after he hit the ground face first following the collision and lay still on his back for a moment, clearly dazed, possibly with a concussion.

The Liverpool forward dragged himself to his feet and scored less than 10 minutes later in the 63rd minute when a corner kick floated over everyone and fell to him, and he sent a right-footed shot back across goal and in off the crossbar. 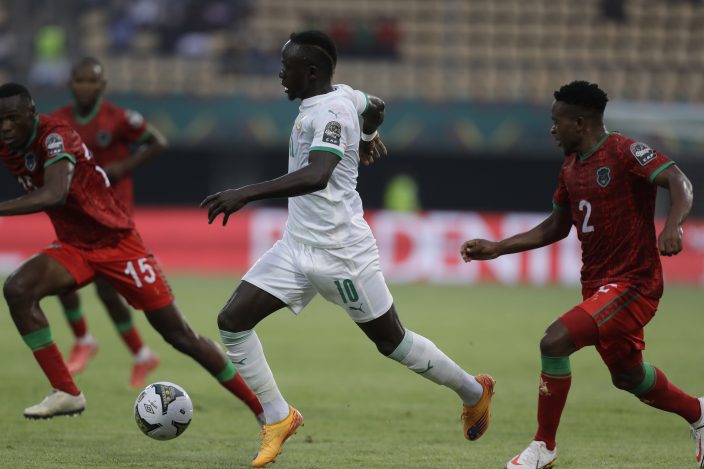 Mané was eventually substituted in the 70th minute, clearly struggling. It was more than 15 minutes after sustaining the head knock that appeared serious enough for him to be taken off immediately.

Senegal finished off nine-man Cape Verde with a second goal from a breakaway in injury time, when Bamba Dieng slid the ball past replacement goalkeeper Márcio Rosa.

Cape Verde was up against it from the 21st minute when Patrick Andrade was sent off for a tackle on Pape Gueye that earned him a yellow card first, then a red when referee Benbraham reviewed it on VAR. He had also sent off goalkeeper Vozinha after consulting VAR. 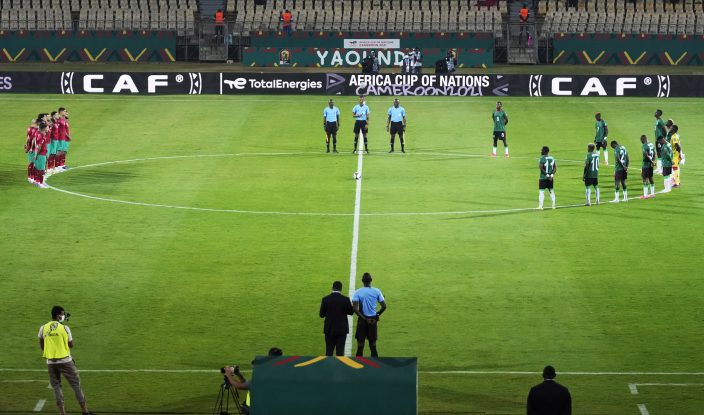 Referee Pacifique Ndabihawenimana of Burundi, with his assistants and players observe a minute of silence during the African Cup of Nations 2022 round of 16 soccer match between Morocco and Malawi at the Ahmadou Ahidjo stadium in Yaounde, Cameroon, Tuesday, Jan. 25, 2022. (AP PhotoThemba Hadebe)

The two red cards for Cape Verde meant seven red cards have been handed out in the first five knockout games of the African Cup. Every last 16 game has had at least one sending off.

Mané's injury again focused attention on soccer's struggle to deal effectively and safely with concussions. The issue has been high-profile in recent years, with the game criticized for allowing players to play on after having sustained dangerous head injuries.

Concussion substitutes are being trialed in some leagues but are not available to teams at the African Cup. Mané could be ruled out of Senegal's quarterfinal game on Sunday if a concussion is confirmed but there is also no mandatory recovery period for players. 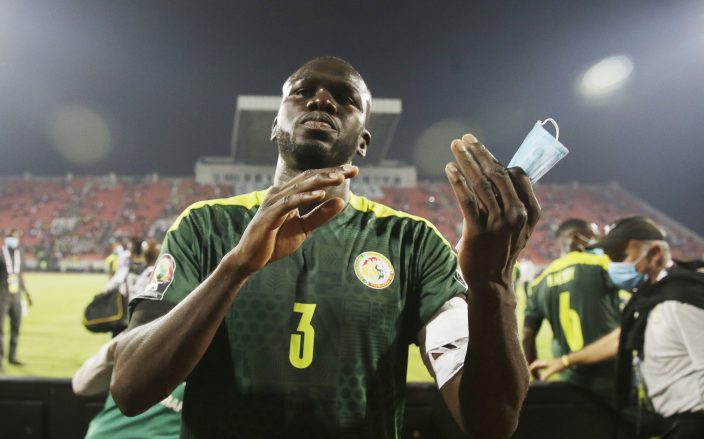 Senegal's Kalidou Koulibaly, celebrates at the end of the African Cup of Nations 2022 round of 16 match between Senegal and Cape Verde at Kouekong Stadium, Bafoussam, Cameroon, Tuesday, Jan. 25, 2022. (AP PhotoSunday Alamba)

Cape Verde goalkeeper Vozinha fought with team medics when they tried to help him off the field after the collision, insisting that he wanted to play on despite being unable to even stand properly. They eventually convinced him to walk shakily to the sidelines. The red card made certain he wouldn't be returning anyway.

The African Cup action continued a day after a crush outside the stadium at the Cameroon-Comoros last 16 game left eight people dead and seven others in a serious condition, throwing a shadow over the rest of the continent's top soccer tournament.

There was a moment's silence at both games Tuesday and some players wore black armbands.

From 3-0 down, Cameroon wins 3rd-place match on penalties