The Latest at the Australian Open on Wednesday (all times local): 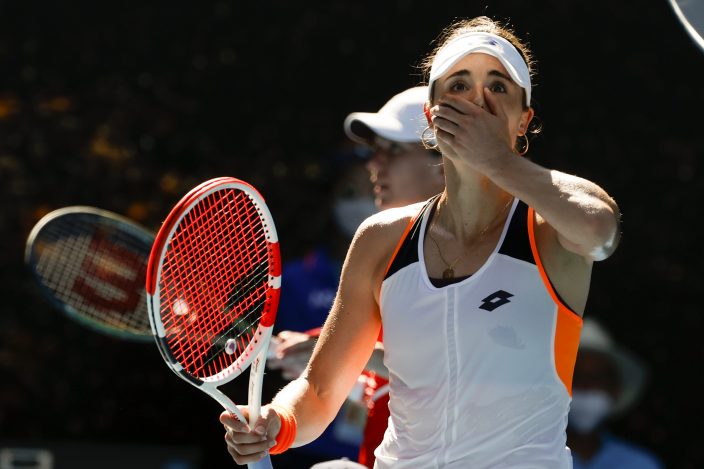 Alize Cornet of France reacts after defeating Simona Halep of Romania in their fourth round match at the Australian Open tennis championships in Melbourne, Australia, Monday, Jan. 24, 2022. (AP PhotoTertius Pickard)

The 32-year-old Cornet is making her first appearance in a quarterfinal at the Australian Open. She upset two-time major winner Simona Halep in the fourth round.

The 28-year-old Collins will be trying to match her best performance here when she advanced to the semifinals in 2019.

The winner will face either Iga Swiatek or Kai Kanepi, who play their quarterfinals match later in the day.

Second-seeded Daniil Medvedev is expecting one of the toughest challenges to his bid to collect a second consecutive Grand Slam singles title when he plays 21-year-old Felix Auger-Aliassime in a night match.

The winners will meet Friday in one men's semifinal, while Rafael Nadal and Matteo Berrettini have already booked their spot in the other, also on Friday.

The Latest: Muguruza gets Day 4 started at Australian Open