Billy Casper and Mickey Wright were undeniable homegrown greats. Phil Mickelson is clearly San Diego's most accomplished and beloved golfer of the modern era, and Tiger Woods has racked up a slew of memorable wins at Torrey Pines in his home state.

Jon Rahm is a Spaniard who lives in Arizona, yet he also occupies a prominent place in San Diego's golf landscape — and he's hoping to make it even bigger this week.

The world's top-ranked player leads a packed field to the edge of the California coast for the first round of the Farmers Insurance Open on Wednesday. 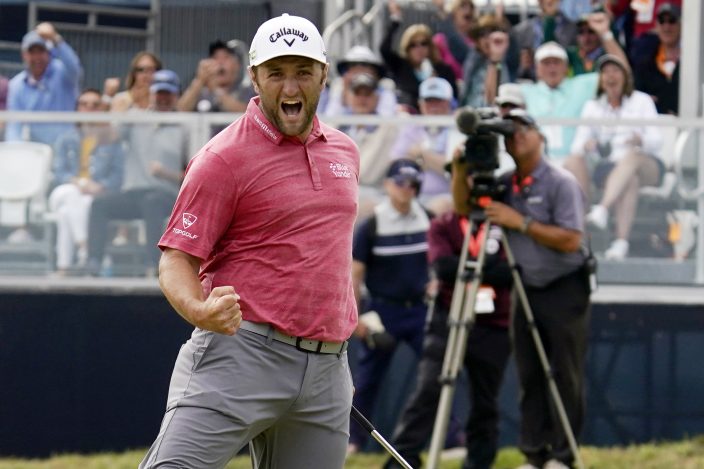 FILE - Jon Rahm, of Spain, reacts to making his birdie putt on the 18th green during the final round of the U.S. Open Golf Championship, on June 20, 2021, at Torrey Pines Golf Course in San Diego. The world No. 1 returns to the site of his U.S. Open victory this week for the Farmers Insurance Open, a tournament he has also won before. (AP PhotoGregory Bull)

Two of Rahm's six career PGA Tour victories occurred at Torrey Pines on these two gorgeous municipal courses — and both were landmark moments in his life.

He got the first win of his career at the Farmers tournament in 2017, and he seized his first major victory here in the U.S. Open last year. Rahm even got engaged in the area in 2018 while on a coastal hike with his now-wife, Kelley.

“It is a golf course that I love, (and) it’s a city that I love,” Rahm said Tuesday. “I have great memories all throughout my career here, my latest win being here as well. Just very excited to be here. It’s one of those weeks that I look forward to every year.”

Rahm secured his breakthrough victory on a stunning 60-foot eagle putt five years ago, becoming the first player to win in his Torrey Pines debut since Arnold Palmer in 1957. Rahm has three top-five finishes in his five starts at the tournament, which is in its 54th year at this famed course.

The biggest win of all occurred last June when he birdied his last two holes to storm past Louis Oosthuizen in the U.S. Open. Rahm was the first player come from behind in that fashion to win the Open by one shot — and he even did it on Father's Day, with both his 10-week-old son and his own father in the gallery.

Rahm is essentially a San Diego local after spending ample time each year in “my family's favorite city,” as he put it. His swing coach, Dave Phillips, lived here until recently, and his partners at Callaway are also based here.

And though he says he isn't superstitious about his patterns in a town that's been so lucky for him, he still has a routine he intends to keep. Rahm lit up as he described his plan to hit his favorite sushi restaurant and his favorite sandwich shop this week, along with near-daily stops at his favorite coffeehouse.

“A lot of times when I feel like I need a weekend without distractions, or I just come and practice, I will come and do that,” Rahm said. “We're probably here once every two months. That would be at the very least.”

The tournament is starting on Wednesday and finishing on Saturday to avoid television conflict with the NFL's two conference championship playoff games on Sunday. Such a brief gap between tournaments could be an annoyance to more routine-bound golfers — but the previous event was only 2 hours' drive away in the Palm Springs area, which means the travel obstacles were minimal.

Rahm is among those who didn't mind: “I drove over with my caddie Sunday night, and we did some practice (Monday), so (today) almost feels like a Wednesday.”

DRIVE TO SURVIVE, PUTT FOR DOUGH

The tournament marks the first week in which the players will be under the cameras of the reality-show producers whose Formula One documentary series on Netflix has contributed to a worldwide boom in the sport's popularity. While several players — including Rahm and Bryson DeChambeau — declined to participate, Justin Thomas and several others will be under a slightly hotter spotlight with behind-the-scenes coverage of their lives and games.

Thomas sounds cautiously optimistic about the attention, saying he'll pull out of the show if it becomes a distraction.

“I want it to be an opportunity,” Thomas said. “Just the fun, different things that people wouldn't necessarily see. ... There’s a lot of different aspects that I think will be great for not only myself, but guys that give people a little better understanding of who we are and grow our brand a little bit.”

Patrick Reed is back to defend his title after scorching the field for a five-stroke victory last year. Reed created plenty of drama during his ninth career win when he picked up his ball after a third-round drive, believing it was embedded. Although replays showed the ball had bounced, officials didn't penalize Reed, ultimately agreeing with his interpretation of events.

“It should be remembered as a victory,” Reed said of last year's tournament. “At the end of the day, the rules officials said we did nothing wrong.”