The Pittsburgh Penguins fell behind on three separate occasions against the Arizona Coyotes, but each time they had a quick answer.

The biggest response came in the third period, when Sidney Crosby and Kris Letang led a four-goal barrage to give the red-hot Penguins a 6-3 win over the Coyotes on Tuesday night.

Pittsburgh trailed early in the third before its offensive show, when Letang scored twice and Crosby netted his 11th for the Penguins, who won their sixth straight game. Arizona Coyotes goaltender Karel Vejmelka (70) looks over his shoulder to find a shot by Pittsburgh Penguins' Kris Letang in the net for a goal during the second period of an NHL hockey game in Pittsburgh, Tuesday, Jan. 25, 2022. (AP PhotoGene J. Puskar)

“What I liked about our team tonight is that we just had a stick-to-it-iveness,” Penguins coach Mike Sullivan said. “There was no panic on the bench.”

Pittsburgh has 17 wins in its last 19 games. Bryan Rust and Brock McGinn both scored their 10th goals of the season and Brian Boyle added a third-period goal. Tristan Jarry stopped 13 shots.

Arizona’s Clayton Keller scored his 16th goal and added an assist, and Nick Schmaltz also scored twice. Karel Vejmelka made 30 saves for Arizona, which has lost three straight and five of its last seven games. 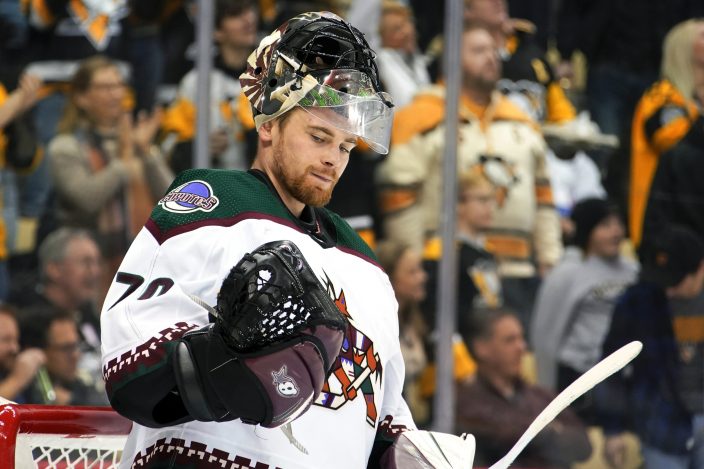 “They have a lot of skill … a lot of good players,” Schmaltz said. “I think maybe we just mismanaged a couple plays and if you do that against high-skill players, they’re going to make you pay.”

Crosby made it a 4-3 game with a give-and-go with Rust at 7:10 of the third. A streaking Rust took a pass from Crosby and returned it to the Penguins’ captain, who quickly buried a wrist shot from the slot.

Letang gave Pittsburgh a two-goal lead with about nine minutes left in the third with his second goal of the game. He took a pass from Evan Rodrigues and sent a blocker-side wrist shot past a diving Vejmelka. 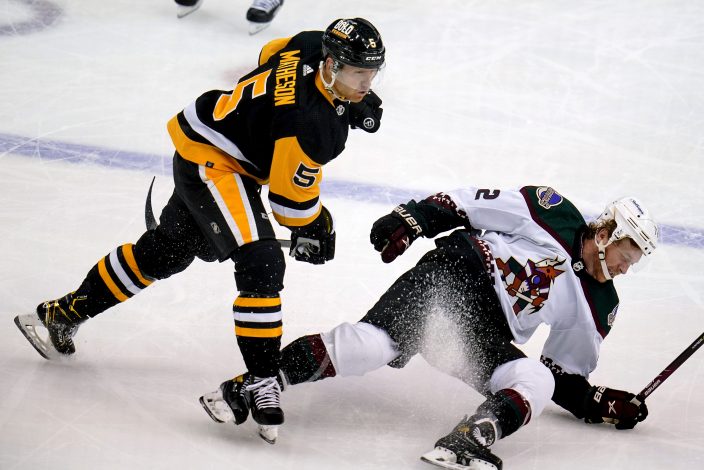 Schmaltz gave Arizona a 3-2 lead at 2:54 of the third period following a sloppy Pittsburgh turnover in the neutral zone. But McGinn tied it at 4:53 when he slid a backhander past Vejmelka.

Then, Crosby and Letang took over for Pittsburgh. 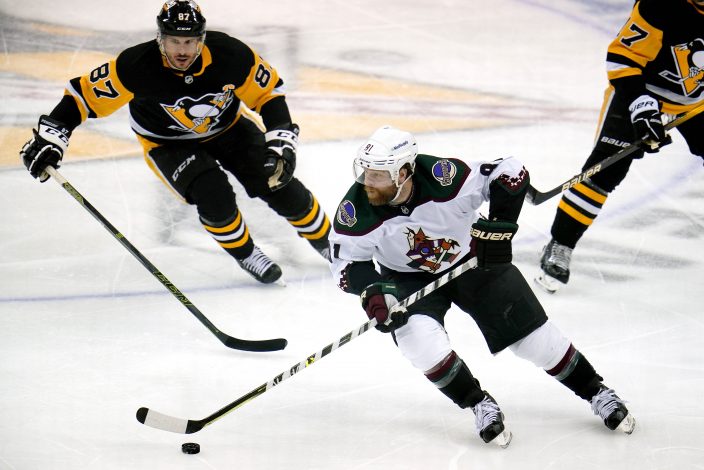 Schmaltz opened the scoring at 8:23 of the second period, and the teams closed the second with three power-play goals.

Rust tied the game on the man advantage at 11:31 of the second, but Arizona regained the lead, 2-1, with about four minutes left thanks to Keller’s power-play goal while Crosby and Jake Guentzel were in the penalty box.

Keller, who will represent the Coyotes in the All-Star game, has 13 goals and 27 points in his last 25 games for Arizona. 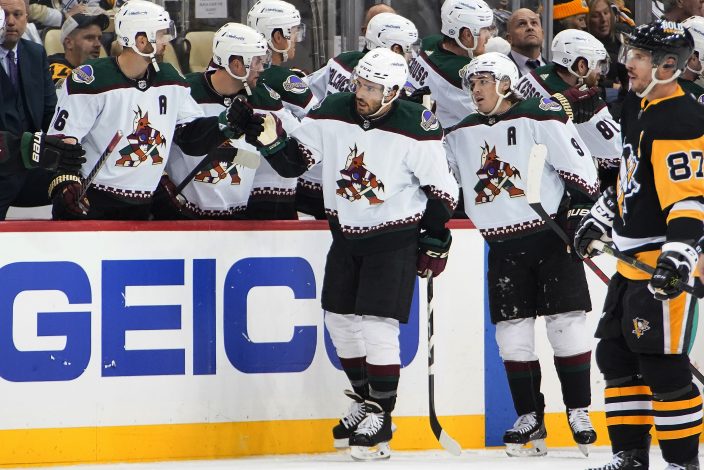 Arizona Coyotes' Nick Schmaltz (8) returns to the bench after scoring during the second period of an NHL hockey game against the Pittsburgh Penguins in Pittsburgh, Tuesday, Jan. 25, 2022. (AP PhotoGene J. Puskar)

Letang evened the score, 2-2, with a power-play goal at 18:18 of the second when his wrist shot hit Vejmelka’s glove and fluttered into the net.

“We didn’t play with that much speed in the first, but we kept building,” Letang said. “I thought we played a responsible game for 60 minutes and at the end we got rewarded.” A shot by Pittsburgh Penguins' Bryan Rust (17) gets past Arizona Coyotes goaltender Karel Vejmelka (70) for a goal during the second period of an NHL hockey game in Pittsburgh, Tuesday, Jan. 25, 2022. (AP PhotoGene J. Puskar)

The Penguins’ six-game win streak is tied with Colorado for the longest active in the league and their 17 wins since Dec. 4 are tied with the Avalanche for most in the NHL during that span.

Pittsburgh also won its eighth straight home game for the first time since an 11-game run in 2018. The Penguins’ 10 wins in January is a new franchise record for the month.

“The expectation inside our dressing room is extremely high,” Sullivan said. “There’s never a sense of satisfaction. That starts with our core players.”

Kessel played in Pittsburgh as a visitor for the second time since the Penguins traded the winger to Arizona in 2019.

Kessel, who spent four seasons in Pittsburgh, was a vital part of the Penguins’ run to consecutive Stanley Cups. He finished second to Crosby for the 2016 Conn Smythe Trophy.

On Tuesday, Kessel skated in his 941st consecutive game dating back to Nov. 3, 2009. He holds the second-longest active “Iron Man” streak in the NHL behind former Coyotes’ defenseman Keith Yandle, who established a new NHL record on Tuesday when he broke Doug Jarvis’ streak by playing in his 965th consecutive game.

Penguins: Continue a six-game homestand on Thursday, hosting Seattle for the first time.