Mexico’s remittances — the money migrants send home to their relatives — have soared in the past two years, and are now expected to top $50 billion for the first time once 2021's figures are added up. That would surpass almost all other sources of Mexico's foreign income.

But as happy as the Mexican government is about the news — it calls the migrants “heroes” — the boom raises questions: Will Mexicans always have to emigrate? And is it sustainable, or just blip fueled in part by U.S. government pandemic support payments?

In many rural places such as Comachuen, Michoacan, every store, business and family depends on remittances. 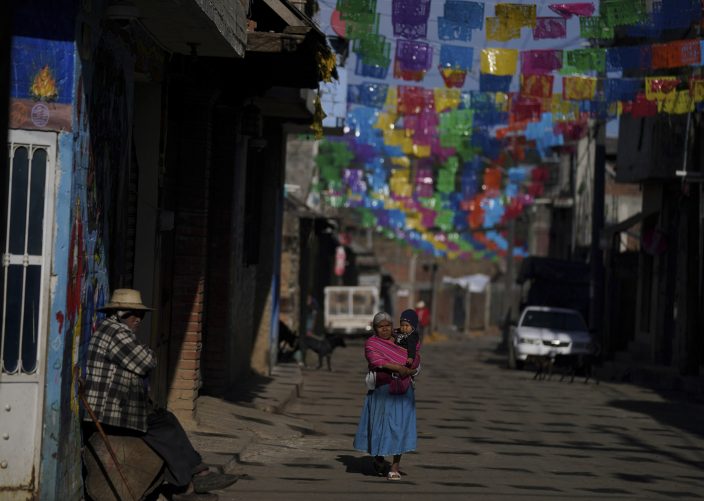 Residents walk along a street decorated with elaborately cut colored pieces of tissue paper called “papel picado, in the Puerpecha Indigenous community of Comachuen, Mexico, Wednesday, Jan. 19, 2022. In some places in rural Mexico, like Comachuen, remittances are often the lifeblood of many towns. Every store, business and family in Comachuen depends on remittances. (AP PhotoFernando Llano)

“Without these remittances that migrants send back to their families here in Comachuen, the town would have no life,” said Porfirio Gabriel, who has spent nearly 13 years working on farms in the United States and now recruits and supervises people to go north.

Remittances as a percentage of Mexico’s GDP have almost doubled over the past decade, growing from 2% of GDP in 2010 to 3.8% in 2020, according to the government. Between 2010 and 2020, the percentage of households in Mexico receiving remittances grew from 3.6% to 5.1%.

For the first 11 months of 2021, remittances grew by almost 27%. Mexico is now the third largest receiver of remittances in the world, behind only India and China, and Mexico now accounts for about 6.1% of world remittances, according to a government report. 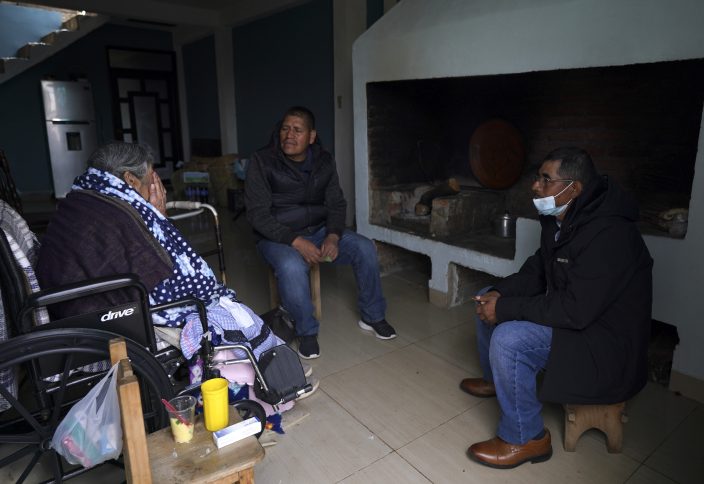 Porfirio Gabriel, an organizer who recruits workers to go north, right, and Jose Gonzalez, center, visit a neighbor in the Puerpecha Indigenous community of Comachuen, Michoacan state, Mexico, Wednesday, Jan. 19, 2022. “Without these remittances that migrants send back to their families here in Comachuen, the town would have no life,” said Gabriel, who has spent nearly 13 years working on farms in the United States, and now recruits and supervises people to go north. (AP PhotoFernando Llano)

On one hand, the spike was simply a matter of need, caused in part by the coronavirus pandemic. Mexico’s GDP shrank 8.5% in 2020, and while the economy recouped about 4.7% of that loss in the first three quarters of 2021, growth appears to have slowed and inflation spiked in the last quarter.

“When a Mexican family suffers illness or their household suffers damage, they receive more. … Why? Because, basically, they ask for help, and that is what I think happened here last year," said Agustín Escobar, a professor at Mexico’s Center for Research and Higher Education in Social Anthropology.

Ironically, part of that growth may have been fueled by a temporary decrease several years ago in the number of new Mexican migrants heading to the United States and a decline in the relative percentage of migrants without proper documents. 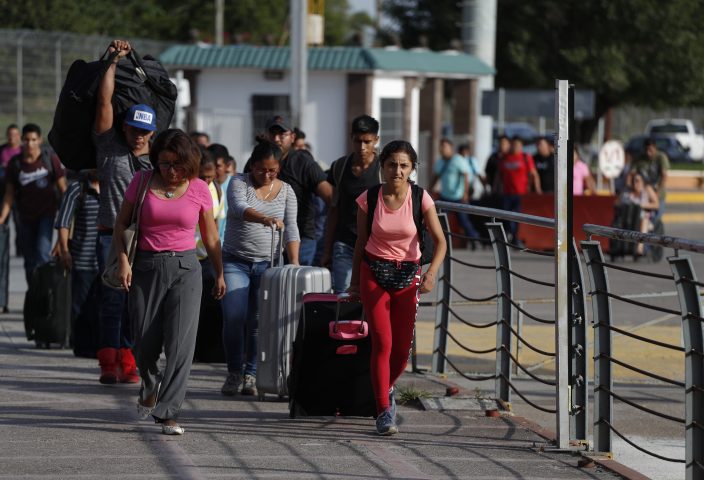 FILE - A group of Mexican workers with seasonal jobs awaiting them in the U.S. walk with their luggage across the Puerta Mexico international bridge toward Brownsville, Texas, in Matamoros, Tamaulipas state, Mexico, June 27, 2019. Mexico’s remittances, the money migrants send home to their relatives, have soared in the past two years, and are now expected to top $50 billion for the first time in 2021, surpassing almost all other sources of foreign income. (AP PhotoRebecca Blackwell, File)

“But how much it can continue to improve in the future is an open question,” he added.

And the fact that a smaller percentage of Mexican migrants don't have proper documents than before means more qualified for U.S. pandemic support payments in 2020. 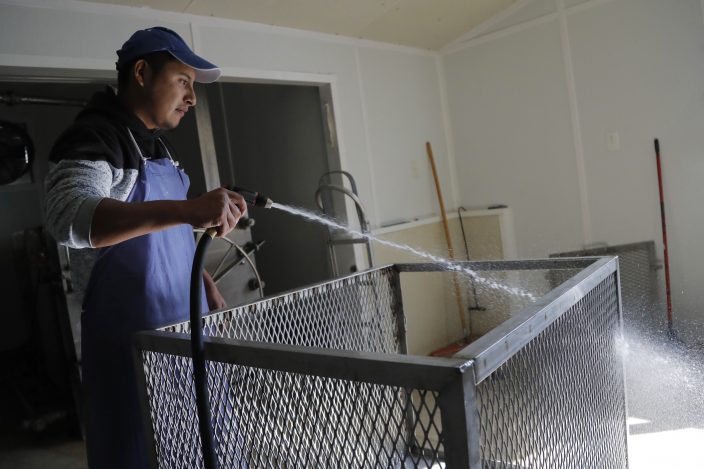 FILE - Santiago Nava, a guest migrant worker from Hidalgo, Mexico, who is on his first trip as a seasonal worker, cleans a container at a crab house in Fishing Creek, Maryland, May 14, 2020. Migrants’ incomes in the United States have been helped by labor shortages there. And the fact that a smaller percentage are undocumented than before means more qualified for U.S. pandemic support payments in 2020. (AP PhotoJulio Cortez, File)

A report by the Liberty Street Economics blog from the Federal Reserve Bank of New York said, “We find that about $24 billion went to U.S. residents born in Mexico, Central America, and the Dominican Republic in April through September” of 2020 when pandemic support payments began to flow under the CARES Act.

While people in Comachuen report using their money to educate their children and build up businesses, research shows the vast majority of remittances are used for subsistence needs — buying more food or medicine, or much-needed household appliances like refrigerators that will save families on food costs in the long run.

There is also a strange dichotomy: The largest flows of remittances go to Mexico’s most violence-plagued states, like Guanajuato, Zacatecas, Jalisco and Michoacan. 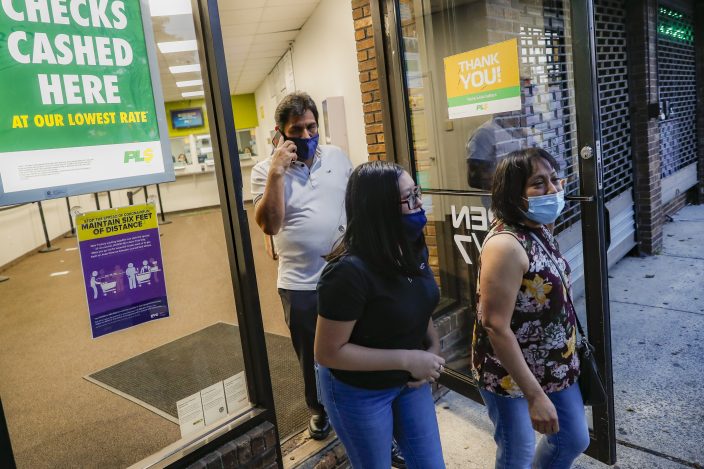 FILE - Magnolia Ortega, right, exits a Western Union with her husband Arturo Morales, left, and Marlene Morales, center, after wiring money to her family in Mexico, in the Staten Island borough of New York, June 24, 2020. Mexico is now the third largest receptor of remittances in the world, behind only India and China, and Mexico now accounts for about 6.1% of world remittances, according to a government report. (AP PhotoJohn Minchillo, File)

“Families in Michoacan are trying to hide that they are receiving remittances. They try to go to a bank branch that isn’t near their house, and not show it off, because these families become a target for kidnappings, to get the money,” Escobar said.

Raul Delgado, who heads the development studies unit at the University of Zacatecas, sees a “vicious, perverse cycle” in tougher U.S. border restrictions. They make immigrant smugglers more necessary, which in turn empowers criminal gangs, who in turn prey on local people, who have to leave their home communities because of the violence. 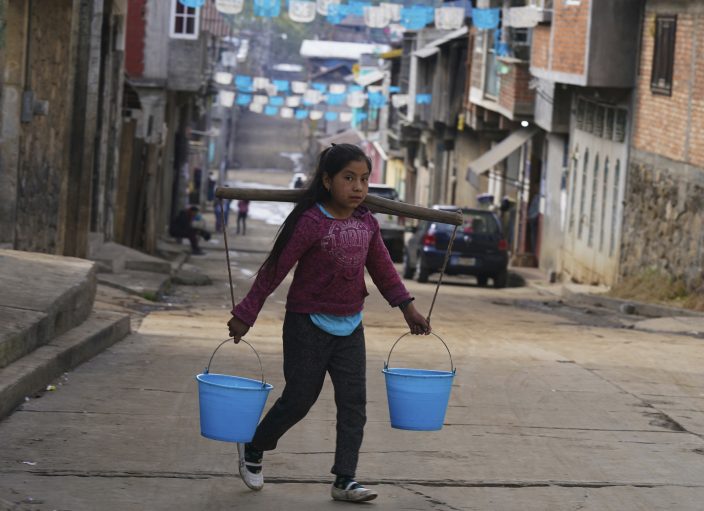 A girl hauling two buckets of water uses a carrying pole in the Puerpecha Indigenous community of Comachuen, Mexico, Wednesday, Jan. 19, 2022. Money sent home by migrants working in the United States have allowed their families to remain in Comachuen rather than moving to other parts of Mexico for work. That, and the fact kids spend much of the year with their mothers and grandparents, has helped preserve the Purepecha language among almost everyone in town. (AP PhotoFernando Llano)