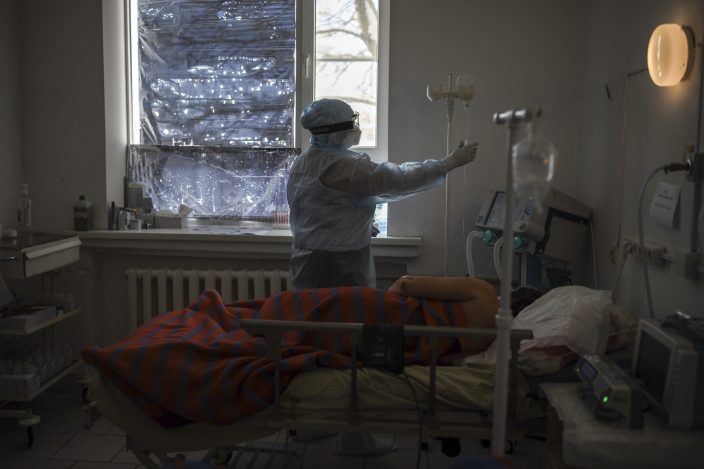 A medic wearing special suits to protect against coronavirus treats a patient with coronavirus at an ICU at a hospital in Poltavskaya village, Krasnodar region, south Russia, Tuesday, Jan. 25, 2022. Daily new infections in Russia have been rising sharply for the past two weeks, increasing more than four-fold — from about 15,000 on Jan. 10 to 67,809 on Tuesday, the highest daily tally in the pandemic. (AP PhotoVitaliy Timkiv)

UKRAINE-ON THE FRONT LINES — The trenches are dusted with snow and tinged with a mix of soot and dirt. Dull colors will cling to them for weeks to come, as the men inside search for enough cell signal to hear the latest from the distant capitals that will decide their fate. As Western-supplied weapons land by the planeload in Kyiv, soldiers and civilians alike wait here with helpless anticipation for decisions made by people who know little about Ukraine and even less about the eastern front lines. By Inna Varenytsia and Lori Hinnant. SENT: 940 words, photos.

UKRAINE-TENSIONS — Presidential advisers from Russia, Ukraine, France and Germany meet in Paris to discuss ways of reviving a stalled peace agreement for eastern Ukraine amid fears that Russia could invade its neighbor. By Lori Hinnant. UPCOMING: 400 words, photos by 6 a.m. With RUSSIA-UKRAINE-BIDEN-ALLIANCES — Biden’s big test: Proving he can rally allies against Putin. For full coverage of Ukraine. 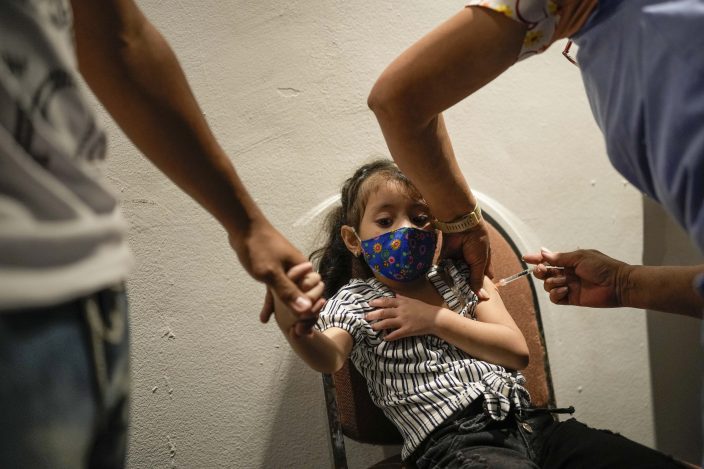 A child gets her first shot of the Sinopharm COVID-19 vaccine at a vaccination site set up inside the Alba Caracas hotel amid the new coronavirus pandemic in Caracas, Venezuela, Tuesday, Jan. 25, 2022. (AP PhotoMatias Delacroix)

VIRUS OUTBREAK-CHINA — Repeated COVID-19 testing of millions of Beijing residents is starting to test the patience of some as the city clamps down on the virus ahead of the coming Winter Olympics. By Ken Moritsugu. SENT: 450 words, photos.

INDONESIA NEW CAPITAL — Indonesia’s government is leaving congested, polluted Jakarta and moving the country’s capital to Borneo. But skeptics worry about the environmental impact of plunking a city in East Kalimantan province, which is home to a wide diversity of wildlife. By Edna Tarigan and Niniek Karmini. SENT: 860 words, photos.

ISRAEL-SETTLERS' STRENGTH — The West Bank settlement of Homesh was formally demolished by the Israeli government in 2005. But settlers continue to visit the site and have even established a Jewish seminary there — all with protection from the Israeli military. Their ability to maintain a presence here is a vivid display of the power of the settler movement, nearly 55 years after Israel captured the West Bank. By Joseph Krauss. SENT: 1,090 words, photos. 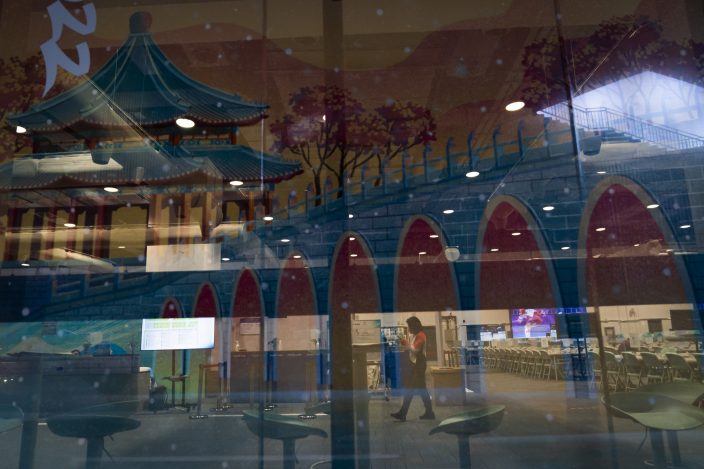 An Olympic worker is seen through a window film depicting the Seventeen Arch Bridge of the Summer Palace at the 2022 Winter Olympics, Tuesday, Jan. 25, 2022, in Beijing. (AP PhotoJae C. Hong)

FEDERAL RESERVE — With inflation punishing consumers and threatening the economy, the Federal Reserve will likely signal its intent this week to begin raising interest rates in March for the first time in three years. The Fed's challenges will get only harder from there. By Economics Writer Christopher Rugaber. SENT: 910 words, photos. 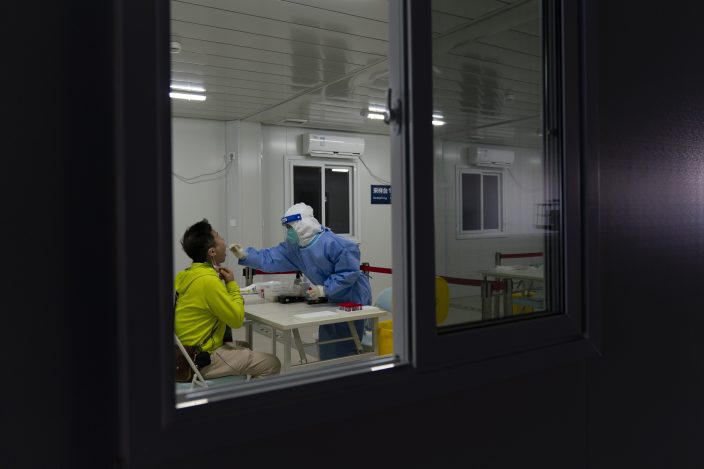 A medical worker collects a swab sample from a man in a COVID-19 testing facility set up adjacent to the main media center at the 2022 Winter Olympics, Tuesday, Jan. 25, 2022, in Beijing. (AP PhotoJae C. Hong)

BEIJING-2008 VS 2022-ECONOMY — China has undergone history-making change since the last time it was an Olympic host in 2008: It is richer, more heavily armed and openly confrontational. By Business Writer Joe McDonald. SENT: 1,020 words, photos.

THE THOUGHTFUL RIDER — There is part of Jamie Anderson, a two-time snowboard gold medalist, that wishes these upcoming Olympics weren't in China. By National Writer Eddie Pells. SENT: 870 words, photos. 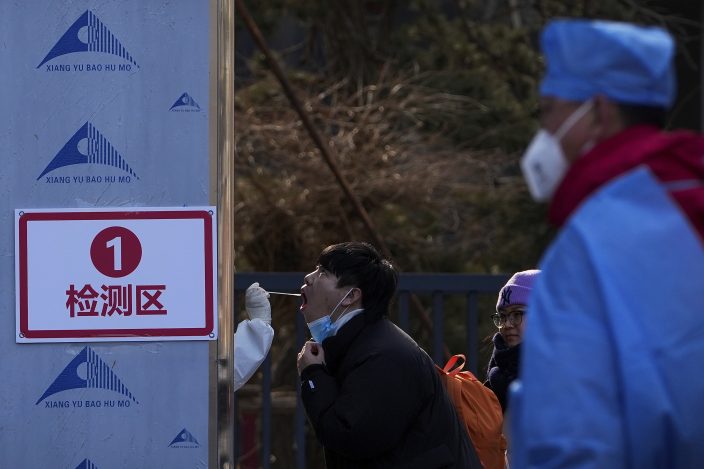 A volunteer in protective gear looks on as a resident gets a throat swab at a coronavirus test site outside a residential housing block in Xichen District in Beijing, Tuesday, Jan. 25, 2022. Hong Kong has already suspended many overseas flights and requires arrivals be quarantined, similar to mainland China's "zero-tolerance" approach to the virus that has placed millions under lockdowns and mandates mask wearing, rigorous case tracing and mass testing. (AP PhotoAndy Wong)

VIRUS OUTBREAK-GERMANY-PROTESTS — A growing number of people in Germany have joined grassroots initiatives and demonstrations to speak out against vaccination opponents, conspiracy theorists and far-right extremists who have been protesting COVID-19 measures. SENT: 800 words, photos. With VIRUS OUTBREAK-GERMANY — German lawmakers to debate possible COVID vaccine mandate.

NATIONAL GUARD-STAYING IN — All over the United States, National Guard units are seeing dramatic reenlistment rates, even as their troops juggle near constant duties with COVID-19, natural disasters and other military deployments. SENT: 1,050 words, photos.

CAPSIZED BOAT-FLORIDA — The U.S. Coast Guard searched for 39 people missing for several days after a boat believed to be used for human smuggling capsized off Florida’s coast en route from the Bahamas. SENT: 380 words, photo.

CALIFORNIA-GUN LIABILITY LAW — A California city voted to require gun owners to carry liability insurance in what’s believed to be the first measure of its kind in the United States. SENT: 510 words, photos.

BRITAIN-POLITICS — Prime Minister Boris Johnson is bracing for the conclusions of an investigation into allegations of lockdown-breaching parties, a document that could help him end weeks of scandal and discontent, or bring his time in office to an abrupt close. SENT: 430 words, photos.

MEXICO-REMITTANCE TOWN — The Mexican town of Comachuen, a Puerpecha Inidgenous community of about 10,000 nestled high in the pine-clad mountains of the western state of Michoacan, survives because of the money sent home by migrants working in the United States. SENT: 1,170 words, photos. With MEXICO-REMITTANCES-IMPORTANCE — Mexico’s remittances pass $50 billion, surge during pandemic

UNITED NATIONS-URBAN WARFARE — More than 50 million people are affected by conflict in urban areas from Afghanistan to Libya, Syria, Yemen and beyond where they face a much higher risk of being killed or injured, the United Nations chief says. SENT: 730 words, photos.

INDIA-REPUBLIC DAY — Thousands of people braved a morning chill on a ceremonial boulevard in India’s capital to watch a display of the country’s military power and cultural diversity, but the colorful annual Republic Day spectacle was curtailed amid COVID-19. SENT: 420 words, photos.

AUSTRALIA-NATIONAL DAY — Australians celebrated and protested the anniversary of British colonization of their country on a day that is officially known as Australia Day but is considered by Indigenous activists Invasion Day. SENT: 500 words, photos.

UNITED NATIONS-HOLOCAUST COMMEMORATION — Secretary-General Antonio Guterres decried the resurgence of antisemitism at a service commemorating victims of the Nazi Holocaust, and he urged people around the world to “stand firm against hate and bigotry anywhere and everywhere.” SENT: 590 words, photo.

ASIA-MEKONG-NEW SPECIES — A monkey with ghostly white circles around its eyes is among 224 new species listed in the World Wildlife Fund’s latest update on the greater Mekong region. SENT: 560 words, photos.

FINANCIAL MARKETS — Asian shares were mixed, with many investors staying on the sidelines ahead of an update on how aggressively the Federal Reserve will tackle inflation. By Business Writer Yuri Kageyama. SENT: 560 words, photos.

JIM LITKE COLUMN-BONDS — Locking Barry Bonds out of the Hall of Fame won’t make baseball any better. Refusing to reckon with its past will only make it worse. By Sports Columnist Jim Litke. UPCOMING: 750 words, photos by 5 a.m.