A man sits on the edge of an infinity pool contemplating his existence in Michel Franco’s “ Sundown.” It’s one of many such ennui-laden images, though the settings get less luxurious as we go along on this strange journey with Neil, a man who decides to drop out of his own life suddenly and with no explanation.

Tim Roth, in a quiet and intentionally inscrutable turn, plays Neil who is vacationing with family members, Alice (Charlotte Gainsbourg) and teenagers Colin (Samuel Bottomley) and Alexa (Albertine Kotting McMillan) at a tastefully extravagant resort near Acapulco. Fans of the beautiful, unhappy families on holiday in “The White Lotus” may find “Sundown” a natural companion to that, at least at the start. Polite hotel workers shuffle in and out of their palatial suite that includes a private infinity pool, ocean view and in-room massages. They collect empty bottles of beer and replace them diligently. In the morning, they greet the jaded sunbathers with margaritas in frosted martini glasses. It is serene and peaceful — you can almost feel the warm breeze coming through the screen.

But just as they’re sipping their morning drinks, Alice gets a phone call. Her mother is hospital bound and they must leave immediately. She dies before they even reach the airport. Alice is in shambles. Neil, meanwhile, is the picture of calm. Then at the airport, as they’re being rushed to check-in, Neil says he's left his passport at the hotel and that he’ll catch the first flight out. 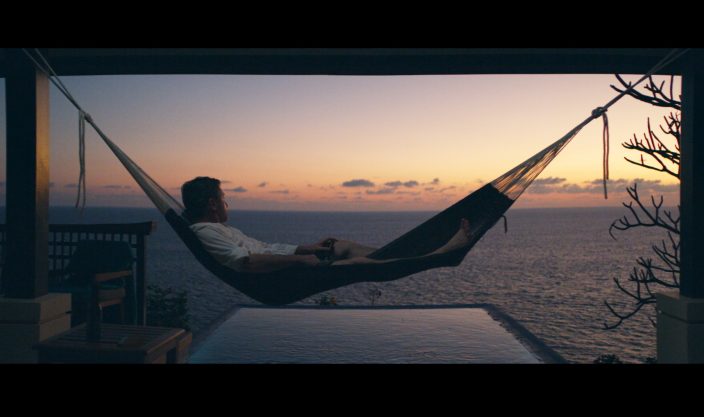 Whether or not he actually forgot the passport quickly becomes beside the point. He hops in a cap and tells the driver to take him to a hotel. “Hotel?” the driver asks. Neil simply nods. They drive into Acapulco, to a place called Hotel Camelinas, a beachside party spot that is not quite a roach motel but still worlds away from the place he had been.

Seaside, there are waiters and unlimited beers too, but they come in buckets and the chairs are cheap plastic. Neil doesn’t seem to care. He’s still sitting in his own mind and taking the occasionally call from Alice, panicking about the funeral and decisions that need to be made. “He’s sorry, he can’t find it, the consulate is closed until Monday, blah blah blah....” he assures her half-heartedly as he goes back to stare at the coast.

What’s extraordinary about “Sundown” is just how little it tells you, how little you get to know the characters, how little actually happens and yet how wholly captivating it is as your mind spins trying to figure out what Neil is doing and how you feel about it too: confusion, frustration, rage, jealousy, admiration or all of the above? He doesn’t care when he returns to his room to find all his possessions stolen. In fact, he tells Alice that he wants to give up his shares in the family company. They are, it turns out, heirs to a billion-dollar slaughterhouse and pork empire. Ah, you start to think, this isn’t “The White Lotus,” this is Season 8 of “Succession."

This image released by Bleecker Street shows Charlotte Gainsbourg, right, in a scene from "Sundown."

At only 83 minutes, “Sundown” remains withholding until the very end. It’s not even made entirely clear for quite sometime what Neil and Alice’s relationship actually is, and Franco does an excellent job escalating the discomfort and alienation that culminates in a truly shocking turn. The movie doesn’t quite recover after that, however.

Ultimately, “Sundown” is more of a spiritual sister to “Melancholia” with shades of “Somewhere." It is a portrait of a body whose soul has long since departed.

“Sundown,” a Bleecker Street release in theaters Friday, is rated R by the Motion Picture Association of America for “violence, language, some graphic nudity, sexual content.” Running time: 83 minutes. Three and a half stars out of four.